I enjoy talking to young journalists and journalism students. Not just because it makes me feel superior, but because it gives me some insight into how the next generation sees our industry and how they plan to evolve it. Every year, I speak to winners of Concordia’s journalism school awards as they’re presented at the Montreal Gazette offices (you can see previous versions of this in 2010, 2011, 2012 & 2013, 2014 & 2015). Today, I’m presenting the latest batch as a series leading up to the deadline for journalism students to apply for next summer’s Gazette internships. 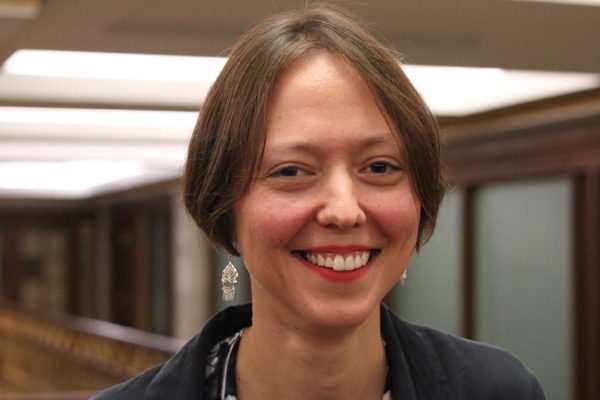 Marchenkova, now 31, was the 2017 winner of the Enn Raudsepp Award, named for the former chair of Concordia’s journalism department. She was a 2018 Gazette summer reporting intern.

With a name like hers, it should come as no surprise that she was born in Moscow, but her background is mainly with another foreign country with a controversial authoritarian leader: the United States.

“My family moved to the U.S. when I was little, so I mostly grew up in Columbus, Ohio,” she explains to me in an email. “I moved around quite a bit after high school: first to art school in the small town of Athens, Ohio, then to Chicago, and finally to New York City, where I finished my undergrad at the New School. Then I got an MA in political science from Central European University in Budapest.“

Her education led to an interest in community organizing. “I organized among street vendors in New York — you know, the people who sell pretzels, hot dogs, purses, etc. — and then moved to El Paso, Texas to work with a large migrant rights group. Finally I took a job at a workers’ rights organization in Burlington, Vermont. Over those years I got more and more involved in communications and writing.”

I wanted to challenge myself, to do something new and creative, to come up with ideas and produce original things. I especially wanted to learn how to make videos, because I love a lot of the short video documentaries coming out these days.

People need information, and I think journalists are the ones that help them find information and understand the events unfolding around them. Journalists are researchers. They should be rigorous, disciplined and specific. They should be relentless in holding powerful people and institutions accountable. I also think journalists lead their audiences to hear stories and get to know people that they would never otherwise encounter.

Right now I’m a sponge and interested in a ton of things, but my goal is to do investigative journalism. I love research and getting super nerdy and detailed. I’d love to work on short current affairs documentaries, or on a current affairs radio show. I’ve learned that it’s hard as hell to do, but I’m really interested in narrative storytelling. And I’ll always want to write.

I’m obviously really interested in politics and social movements, and I think my experience in those areas helps me to be critical and sensitive to how power operates and shapes the world around us. I also really love fiction, especially stories about immigrant experiences, and fiercely feminist stuff like Elena Ferrante and Clarice Lispector. Maybe all that reading will help me be a better storyteller myself.

Total precarious disinformation dystopia. Just kidding. I’ll answer that by naming a project that inspires me: ProPublica’s Local Reporting Network. They’re giving local newsrooms around the [U.S.] enough money to pay one of their reporters to take on investigations for a year. Then ProPublica publishes the investigations alongside the local outlet. (I wish someone were doing this in Canada.) I think it’s so cool because it enables important local reporting, it gives local reporters opportunities in their own newsrooms, and it collects nuanced pictures of what’s happening around the country for a national audience. When I think about the future of journalism, I try to focus on collaborative, mission-driven ideas like that.

I finished the graduate diploma in visual journalism at Concordia. That meant I spent a lot of hours editing video, including making a short documentary film about how my sister and I lost our native Russian language. Then this summer I interned as a reporter at the Montreal Gazette, writing stories daily. It was an incredible experience: I learned so much, like the flow of a reporter’s day and new tools for writing efficiently. The past year or so was exhausting for me, so I then went on vacation. Now I’m back in Montreal, taking the second-to-last level of government French courses, freelancing, and figuring out my next moves!

I put selected work on my website at www.daryamarchenkova.com, and my Twitter is @daryamarcha. Feel free to get in touch with me!

Darya was a strong intern this summer at the Gazette (you can read her stories here) and my colleagues had nothing but good things to say about her. Be like Darya, and apply for the Gazette internship. The deadline is 5pm on Nov. 2.