Every year, I speak to winners of Concordia’s journalism school awards as they’re presented at the Montreal Gazette offices. Today, this year’s winner of the Lewis Harris bursary, Franca Mignacca. 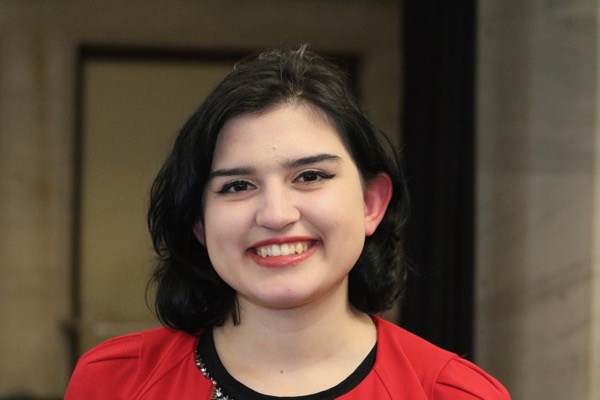 Last week, Franca Mignacca provided an inadvertent demonstration of one of the more important practical rules of journalism: Get people’s names right.

When the Montreal Gazette helps present bursaries to Concordia University journalism students, the way it works is that someone connected with the person the award is named after (usually a family member) gives a little speech about that person and then talks a little about the student receiving the award. The latter part of the speech is basically a summary from the student’s submission for the award, and it’s not double-checked before delivery. Mignacca’s name was massacred while being announced, leading to profuse apologies from just about every adult in the room.

She took it in stride, though.

Another thing about this awards ceremony is that while the entire graduate diploma class is invited, and none of them know who will win awards, some awards are given to undergrads, and the fact that they’re there means they know they’ve already won.

Mignacca, 22, is an undergrad, studying journalism and film. She was news editor and managing editor of The Link at Concordia, and she recently published stories as an intern with CBC Montreal.

Why did you get into journalism?

I don’t know. I guess I’ve always enjoyed writing and I’ve always enjoyed communicating with people, so I feel like this is a profession that allows me to do both. It lets me give voices to people that aren’t necessarily heard otherwise, which means a lot to me.

Do you see yourself incorporating your film studies into journalism?

Initially I chose the minor in film studies because I was really influenced by François Truffaut, who was a French new wave director, and I really wanted to be a film critic and potentially write for the Cahiers du cinéma some day in France. As I started to go through J-school, my interests kind of changed, and as much as I am still passionate about film, I’ve very much become more of a news reporter lately. So who knows, maybe some day I’ll do something with the film studies degree, but for now it’s more of a pastime.

I see myself being a multiplatform journalist. I really like radio, TV, web writing and print writing so I see myself honestly doing a bit of everything. In terms of topics to report on, I’ve honestly covered everything from sports to news to arts, so I’m not entirely sure, but if there’s one thing that I’ve covered more than others, I’ve covered a lot of Indigenous issues. I’ve reported on Indigenous communities, especially Kahnawake, and Indigenous initiatives in Montreal and I’d really like to keep doing that.

Is there a particular reason that speaks to you so much?

My first internship was at the Eastern Door [the weekly newspaper serving the Kahnawake community], and I guess that’s why. I really liked it. I feel like they don’t get nearly enough attention in mainstream media and I want to give them more attention.

So you’re entering a field that…

Oh wait, wait wait, can I add something to that?

So you’re entering a field that is in the midst of, let’s say change. How do you see the future of journalism?

I do think a lot of journalism is going to end up on the web. But I do think that it’s not a dead profession. I think a lot of people think of it as a dead profession, but it’s like I always tell people It’s not necessarily dying. It is changing, it’s going to different mediums. Where you would listen to the radio before now you might listen to a podcast or you read articles online. So I do see it going more online.

Are you worried about the business model?

Not really. I am a little concerned because I am seeing more sponsored content and larger ads taking up space where there would be articles, and smaller issues, and that does concern me a little. But I think that we’re living in a time when news is important and I think people, at least here, at least somewhat recognize that and I do think we’ll find a way to make the profession survive.

It sounds cheesy, but honestly journalism to me is both telling people’s stories but also holding authorities accountable and making sure that people aren’t stepped on because they don’t know what’s going on at levels of the government, that they know where their money is going and they’re not taken advantage of.

Mignacca is among many students strongly encouraged to apply for the Montreal Gazette summer internship. The deadline is 5pm on Nov. 2.