Every year, I speak to winners of Concordia’s journalism school awards as they’re presented at the Montreal Gazette offices. Today, one of the winners of the Enn Raudsepp bursary in 2016, Michael Boriero. 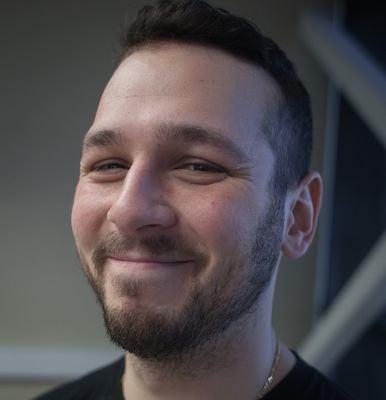 I’ve never met Michael Boriero. And he feels really bad about it.

You see, in 2016, when the Montreal Gazette hosted an awards night for Concordia Journalism students, and invited the entire graduate diploma class to attend, Boriero was among some students to skip it.

“I chose to work on a school assignment instead,” he tells me now by email. “Not worth it in hindsight!”

So when his name was called out as the winner of the Enn Raudsepp award, named for (and presented by) the former journalism department chair, there was an awkward oh-he-didn’t-show-up moment. His classmates vowed to ensure he didn’t live it down.

But I won’t hold it against him, except for the public embarrassment of publishing the above paragraphs on the internet. I got his contact info from professor Linda Kay and sent him some questions. (The photo is supplied, since I didn’t get the chance to take his picture either.)

The 27-year-old from Kirkland has a B.A. in history from Concordia, and has worked as a freelance journalist for various publications including the Suburban and WatchMojo. After earning his degree in 2014, he spent a year in Hangzhou, China, teaching English as a second language. Then he came back and entered the journalism diploma program.

While I was living abroad I knew I wanted to go back to school. I started writing a blog, it was supposed to be weekly but it turned into a monthly thing as I got busier. But I realized that I enjoyed sharing my experiences and telling stories about the students, teachers and people I met while living in China. It wasn’t always easy being away from my friends and family but writing became an outlet for me to unwind and understand what was happening around me. A few months into my stay, my girlfriend sent me a link to the Concordia journalism graduate diploma and I jumped on it as soon as I got back to Montreal.

I just think journalism keeps people honest, and curious about the world, or city that they live in, by exposing them to unique stories, people, organizations, etc., that they may have never heard about. But at the same time, through those stories, journalism also opens our eyes to issues of corruption, natural disasters, war zones, and political movements.

Since graduation, I’ve mainly done online and print, but I really miss the video and radio aspect of this job. I’ve covered a lot of sports, some arts, politics and general news. I’m not really picky, I like to learn about new and different things, meet new people and share stories around the city. I’ve wanted to start podcasting but I have yet to take the plunge, maybe something revolving around sports, politics and culture.

I like to read just about anything. Recently, I got really into comic books and graphic novels. I find it’s a great medium to learn about scripting and narrative. I’ve also written scripts for a YouTube channel and that has helped me understand the importance of outlining your story before starting to write.

I know the future of journalism has many within the industry worried, but I’m sort of excited to see where it goes. Yes, it feels like journalists are being laid off every other week, and that scares me a bit, but at the same time new opportunities are popping up. As journalists, we’ll probably need to fight harder to tell our stories and hold people accountable. But with mediums like podcasting and The Athletic gaining popularity, I’m inclined to believe people will always want fact-driven, honest, original, and creative storytelling. I think the industry is just enduring an uncomfortable shift.

I completed my diploma and I’ve been freelancing ever since. I had a brief stint as a content writer for a marketing company but after several months, I decided to focus all my attention to freelance work. It has been a grind, for sure, but I really love what I do and I wouldn’t have it any other way.

I’m published weekly in The Suburban and online at www.thesuburban.com. I cover local amateur sports and athletes, and I can be found in their arts and entertainment section. I’m also published weekly for the St-Lambert Journal, TMR Journal and Nuns’ Island Journal, where I do features and write about local news. Unfortunately there is no online platform available. My Twitter is @boriero84 and my DMs are always open!