Every year, I speak to winners of Concordia’s journalism school awards as they’re presented at the Montreal Gazette offices. Today, this year’s winner of the Enn Raudsepp award, Amanda Henderson Jones. 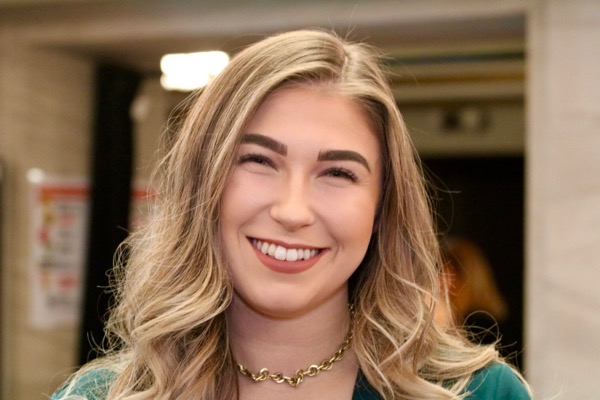 I know what you’re thinking. She looks like her name is Amanda Jones and she’s a sorority girl who gives beauty tips on her own YouTube channel. And … okay, that’s true, BUT she also has a degree in criminology and is planning to go to law school.

The 22-year-old from Barrie (actually Midhurst, Ont., a suburb just north of it), Jones studied criminology and sociology at Western University (you know, that geographically-challenged university that used to be called the University of Western Ontario even though it’s not in western Ontario).

She’s not trying to be pretentious with the triple name, but just try Googling “Amanda Jones” and there’s a sea of them, from “America’s favorite dog photographer” to a 19th-century inventor to Miss USA 1973 to a Kansas insurance agent to a Scottish lawyer to a San Francisco writer/photographer to an actress to a different actress to a New Zealand public health researcher to a Texas painter to a Seattle medical educator to a Missouri mom of a missing girl to a British racing cyclist to a University of Waterloo PhD candidate to a Rolling Stones song (and a Lea Thompson character from an 80s movie it was used in). And that’s just a couple of pages of Google results. I could go on for a while here.

“To not be one of the million Amanda Joneses, all my work I’ve gone under Amanda Henderson Jones,” the Amanda Jones I talked to said. “It’s my mom’s maiden name.”

I always liked writing. When I was in high school I took a journalism course, honestly because my debate coach was the teacher and you’re supposed to be doing debate work during the course, but I ended up really loving it. She gave me a lot of freedom when it came to the type of work I was doing — pure journalism but a lot of parody writing and comedic writing and things that I loved.

So I ended up applying to Carleton journalism on a whim; it was the school I wanted to go to the most in my undergrad. I got in with a very big scholarship and my father suggested I go to business school instead. So I went to business school! I went to Western, I was originally in the Ivey Business School. It was a program that you were supposed to start your third year and when it came to the third year I was like ‘I don’t want to do this.’

To backtrack a little bit, after doing economics, accounting, all numbers, I was missing a creative outlet. So at the end of first year I decided to apply for Her Campus [a website for “for the empowered college woman”], the Western chapter, where I started as just a general writer. I really, really loved it. So that year, my second year, I became a chapter adviser for Her Campus. which is where you oversee seven chapters and advise them on writing and day-to-day and sort of be their connection between Her Campus chapter and national, and at the end of the year I was elected editor in chief for their chapter. And then around the same time I had been following this blog called Total Sorority Move since I was in high school, writing all these parodies. I decided, again on a whim, I always loved this site, let’s apply for a job. I ended up getting the job and was a staff writer for two years at TSM, where I did a lot of comedic writing, which is — I mean, I love journalism, but my true love is comedic writing and being funny and different.

Not to continue to say my CV, but around the same time I left the Western chapter and moved to the national chapter of Her Campus, where I was a style and beauty writer as well as a national intern, and it sort of got to the point in my undergrad — because my undergrad is in criminology and sociology — it really got to the point that just 90% of my time was journalism. So I decided to apply to Concordia. This program seemed amazing, and I’ve put so many years into journalism and wanted to study journalism for such a long time that [I thought] I should just do it. And so that’s kind of what made me do it, was just years of all these different types of writing that I was like I should really give it a shot and if I don’t study it now, when am I gonna study it?

What kind of journalism do you see yourself doing?

So I am hoping to go to law school after this, and ideally I would like to be doing some sort of legal reporting, that feeds my major in criminology into it, which really interests me. Now I basically just work all day and then go home and watch crime shows, so if I could just merge the two that would be cool.

Where did the interest in criminology come from?

I wish I knew. I really wish I knew. I’m absolutely fascinated by it. I’m always afraid I’m going to scare people off when they enter my apartment because I just have a bookshelf full of books on serial killers and crime, and my Netflix history knows me very well, I don’t think it suggests a single thing that isn’t murder. My parents are worried about me (laughs). It’s just a real interest of mine and I’m really glad I got to study it in university.

What medium would you see yourself working in?

Definitely writing. As much as I love doing the radio, the broadcast, I love just putting pen to paper.

Do you see yourself doing stories on a daily basis or more magazine writing?

I don’t really know. I think beat reporting interests me when I’m young, but I don’t know if I’d want to carry that on when I’m 40, so I think that whatever happens happens. I’d obviously love to do bigger investigative pieces. I took a course on the wrongfully convicted and taught a seminar on it and that really interests me, the fact that journalism can play such a big part in the wrongfully convicted and helping [innocent] people get off and get out of jail where they shouldn’t be. We’ll see what happens.

That is genuinely scary. With Donald Trump and fake news in one compartment, and bloggers and companies trying to abuse bloggers and not pay people for writing. I mean, the number of times I’ve gotten emails being like ‘We’d love you to do this big job,’ and I talk back and forth about what this job would entail and 10-20 emails down the chain they go ‘Well this is all for free but this will look really good on your resume.’ Well, my resume is actually very good, thank you. You’re not really doing me any favours by asking me to relocate to a new city and start a whole branch for you completely for free.

So I think the world of journalism is really shifting, I think that we need to, as journalists, really assert ourselves and make sure that we let the world know that hey, our profession is very valid and should be valuable, should be paid, and respected, because we all go to school for this, we all put in the all-nighters for this and we’re all very passionate about this and we’re not all just bloggers sitting at home on the computer [Editor’s note: Maybe I should be transcribing this at work instead of on my couch]. We should be respected.

Considering the changing business model of the industry, how optimistic are you of journalism’s future?

I am optimistic. I did get a paying journalism job when I was 19. I think if you find your niche and you find people who value your niche that can never really be replaced.

I am on Instagram, at @amanda_h_jones. If you just Google “Amanda Henderson Jones” everything should come up.

Amanda Henderson Jones is among many students strongly encouraged to apply for the Montreal Gazette summer internship. The deadline is 5pm on Nov. 2.