Every year, I speak to winners of Concordia’s journalism school awards as they’re presented at the Montreal Gazette offices. Today, this year’s winner of the Philip Fisher bursary, Aviva Lessard. 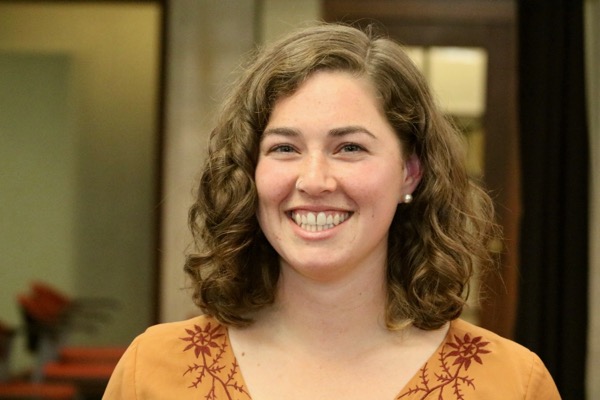 Normally at the bottom of these things I try to plug a Twitter account or website or Instagram or something so people can follow these aspiring journalists’ careers. But Aviva Lessard gave me a bit of an embarrassed shrug because she hasn’t set up an online presence for herself yet. She’s promised to get working on that. She asked what form (Twitter, Facebook, website) that should take, and I noted that the younguns these days do the Instagramming more than Twitter, but really the more the merrier as far as social platforms.

(UPDATE: She’s since fixed that. See below.)

In the meantime, you can read her articles at The Concordian, or this documentary she did about waste management in Victoria, or this project that tells the story of the Oka crisis through a series of maps.

Lessard was an anthropology student at the University of Victoria, but grew up in Montreal. While at UVic she held jobs including production coordinator at its radio station CFUV. Among her functions there was to edit this podcast for use on the radio at CFUV and other campus and community radio stations. She’s not sure if I’ve ever heard of it. It’s called “Canadaland.”

Something about media, I think.

I started by having this big passion for podcasts, and being really obsessed with them. I listened to them constantly and I find that type of storytelling is so vulnerable and compelling, so I just wanted to try to make that kind of work. After I finished my undergrad, I was always looking at jobs that were in that vein, and then my friend mentioned this program (the graduate diploma in journalism at Concordia), and I was like “oh journalism, that’s the word I’ve been looking for, that’s the field that I want to get into.”

Since starting the program I’ve been exposed to print, video, radio, all the mediums and I’ve been really enjoying them all. There’s so many ways to tell stories, and I’m happy to be able to know how to tell stories in so many different ways.

You studied anthropology. Do you see yourself using that in your journalism?

Yeah, totally. People don’t see the connection between the two fields but I find them so complementary because the methodology that you learn in anthropology is open-mindedness and just listening and learning to put your background aside, put your notions aside and listen to other people. And I did a lot of, for example, multi-media projects that in anthropology are so similar to journalism. So definitely using the methodologies that I learned in that undergraduate degree.

What kind of journalism do you see yourself doing?

Well, it’s been really interesting to be exposed to fast news, hard news. In a lot of the classes that I’m taking that’s what we focus on, and I’m excited to take the skills to be able to tell those kinds of stories. But also I’d love to tell more long-form audio stories, that’s kind of where I see myself, where I’d love to go eventually. But I know that learning the more newsy approach is really helpful for me to be able to tell those stories as well in a compelling way.

What kind of stories do you want to tell?

I’m very open and very curious about almost any subject, but I don’t want to necessarily go down any particular route. I think I’m gonna see where things take me. I’d love to work on a team where people know what kind of stories they want to tell, and at this stage in my life just work with others and see what their visions are. I don’t necessarily have a specific domain I want to go into at this point.

I think back to the whole podcast audio storytelling. I think it’s exploding right now and there are so many amazing shows that are doing so much investigative work and doing work to just basically connect humans to humans. And being able to just understand people’s mindsets. And I think that’s what’s so important right now. Why is somebody making some crazy claims? There’s a reason behind it. There’s a life behind it. I think journalism will be so important to counter this polarization that’s happening, especially what we’re seeing in the United States. And in Canada. I think journalism is about creating knowledge and creating spaces for people to understand each other and that’s, I think, what is necessary, what’s at the core.

Are you optimistic about the future of journalism as a business model?

I think it’s changing a lot and a lot of the changes are good. What do you mean by as a business model?

Well, are you worried about getting a job?

I’m not that worried. But I don’t think the job that I’m going to get is what I’m expecting. I’m open-minded and I’m really just ready to work hard no matter where I’m working, so I’m not too concerned, but I think it’s going to change. It is changing, and because there are so many more mediums that are accepted now, we’re not just reading newspapers, we’re already in the midst of the change, so I’m not really too concerned.

Not right now. I’m not ready for that, but that’s a really good reminder. I’m not very social media at this stage of my life, but I’ll change it.

Aviva Lessard is among many students strongly encouraged to apply for the Montreal Gazette summer internship. The deadline is 5pm on Nov. 2.

Lessard writes to say she’s set up a website and those other media things the kids do these days. You can see her stuff at avivalessard.com, and find her on LinkedIn, Twitter and Facebook.