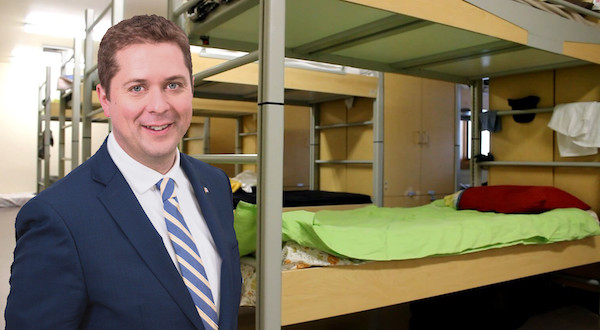 Saying he’s doing his duty as a patriot, Conservative Party leader Andrew Scheer opened up a series of shelters across the country to care for the millions of Canadians who have lost their jobs as a result of Justin Trudeau’s job-killing carbon tax.

The federal tax, which took effect on Monday, only applies to Ontario, Manitoba, Saskatchewan and New Brunswick, and most of the shelters are in those four provinces, but Scheer said other provinces also have job-killing pricing on hydrocarbons, and people in Alberta and Quebec will also be able to make use of his party’s shelters when they inevitably get laid off from their jobs.

Scheer couldn’t say how much the shelters cost or how many people have taken advantage of them so far, but he noted the costs should be minimal because they’re only needed until October, when his removal of GST on home heating bills will turn the economy round. Enough food, mainly in the form of white bread and baloney, has been stockpiled to last that long.

Besides, he said, if the Liberal government could use taxpayer money to bring in cots for a late night marathon voting session at the House of Commons, surely that money could be better used on Canadian families.

“Be sure to use the words ‘Canadian families’ a bunch of times in your story,” Scheer said.