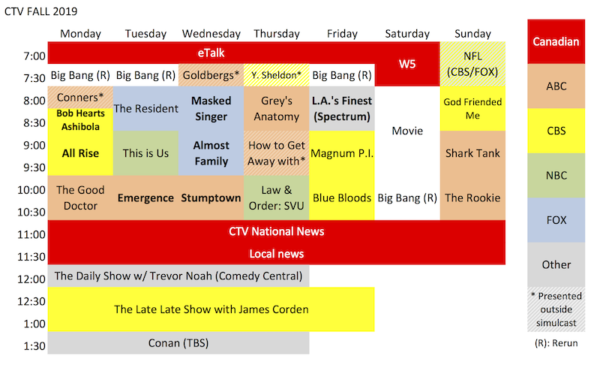 The full list of new U.S. acquisitions is here. 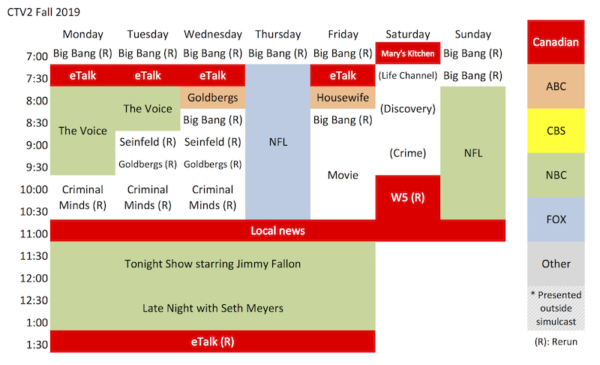 Bell Media’s second network continues to earn its reputation as a dumping ground for overflow programming. Besides The Voice and NFL games, it has only two comedies (one of which airs a half-hour earlier on CTV). Everything else is reruns, including nine slots for The Big Bang Theory and three for Criminal Minds.

The biggest news is that Bell Media is finally going through with its plan, announced a year ago during the 2018 upfront, to rebrand four specialty channels as CTV channels:

It’s interesting that rather than tie the Space and Comedy brands to their U.S. counterparts (like they do with the Discovery channels, HBO, Starz, MTV, and E!), they’re expanding a Canadian brand that they’ll have no big-budget help in promoting.

For Bravo in particular, the move makes sense because of how much the Canadian version has departed from the U.S. version. The Canadian channel, with shows like The Handmaid’s Tale and Killing Eve, is drama-focused, while the U.S. Bravo has gone the reality route. But in case you think it’ll be all dark dramas, they’ve just announced a deal to produce original Harlequin movies as well.

For Gusto, an independent channel Bell acquired to give it a lifestyle brand, the move signifies a move to expand the scope from mainly food to also include home renovation, travel and lifestyle.

Several new original Canadian series are in the works for specialty, including three lifestyle shows for CTV Life, two documentaries and a comedy (plus Just For Laughs) for Crave, four documentary series for Discovery and two more for Investigation, and a documentary for Much Studios. 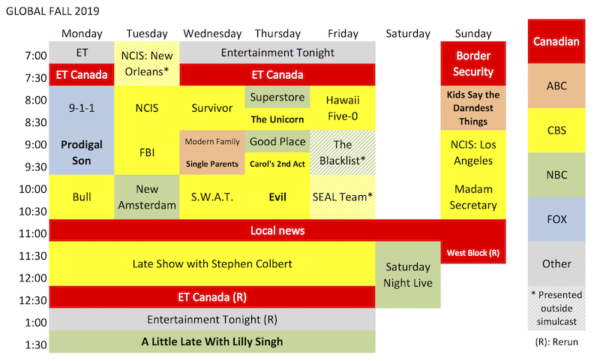 The full list of original programs for Global TV and other Corus channels is here. 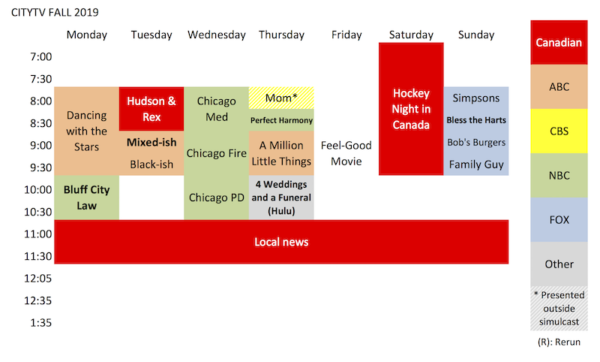 Sportsnet’s schedule remains based on live sporting events. But Rogers announced that Sportsnet is starting a new original content studio for online platforms and social media.

The smaller players — CHEK in Victoria, CHCH in Hamilton, NTV in St. John’s, and YesTV in Alberta and Ontario — once again joined forces as “IndieNET” to promote their fall programming. Unfortunately they don’t post their upfront details online, but Cartt.ca summarized the news:

The independent specialty channel owner presented its slate of original programming for the coming season a couple of weeks after the big guys.

7 thoughts on “Highlights from the Canadian TV 2019-20 upfronts”