It was 15 years ago today that I walked into the offices of The Gazette, got trained on how to use their software, and began my career as a professional copy editor.

More than a third of my life has been spent employed by this newspaper. And in that time, I’ve never wanted to do anything else, because there’s always something new.

In the past week, as I’ve been doing some pandemic-related cleaning up of old stuff, I went through some old issues I had lying around from years ago, and it amazes me how much this newspaper has changed in that decade and a half.

Of course, I’ve worked with many people who would tell stories about the good ol’ days of hot type, constantly-crashing computer systems, typesetters, darkrooms, presses in the building, managers working late with ashtrays on their desks and alcohol inside them. But those were long before my time, and those times changed mainly because of technology.

In the past 15 years, though, it’s the business that has changed the most. The revenue side of the newspaper business model has crumbled away, and years of cutbacks have forced a much more efficient newsroom that focuses on its core mission to the detriment of the rest. Meanwhile, the demands of an increasingly online readership (and the hope that digital revenue will take over from print before the business collapses) have meant more resources being focused on digital platforms that didn’t exist back then.

To give you an idea of how things have changed, I figured I’d give you a tour of The Gazette in May 2005.

It was a busy week in the news, but then all weeks are. A federal commission of inquiry led by judge John Gomery held hearings into a partisan government spending scandal, television host Véronique Cloutier held a press conference to condemn her own father for his seven-year campaign of sexual abuse of singer Nathalie Simard as a minor, Hollinger Inc. demanded that media tycoon Conrad Black (a former Gazette owner) be held in contempt of court after he was caught on tape removing boxes from company’s offices, the London Knights beat the Rimouski Oceanic and its promising young player named Sidney Crosby to win the Memorial Cup, Conservative MP Peter MacKay was nursing a broken heart after learning his girlfriend had switched parties, radio station CHOI Radio X was fighting for its life at a CRTC hearing, France was preparing to vote on a European Union constitution, and a 33-year-old son of a former prime minister got married to a girl named Sophie. 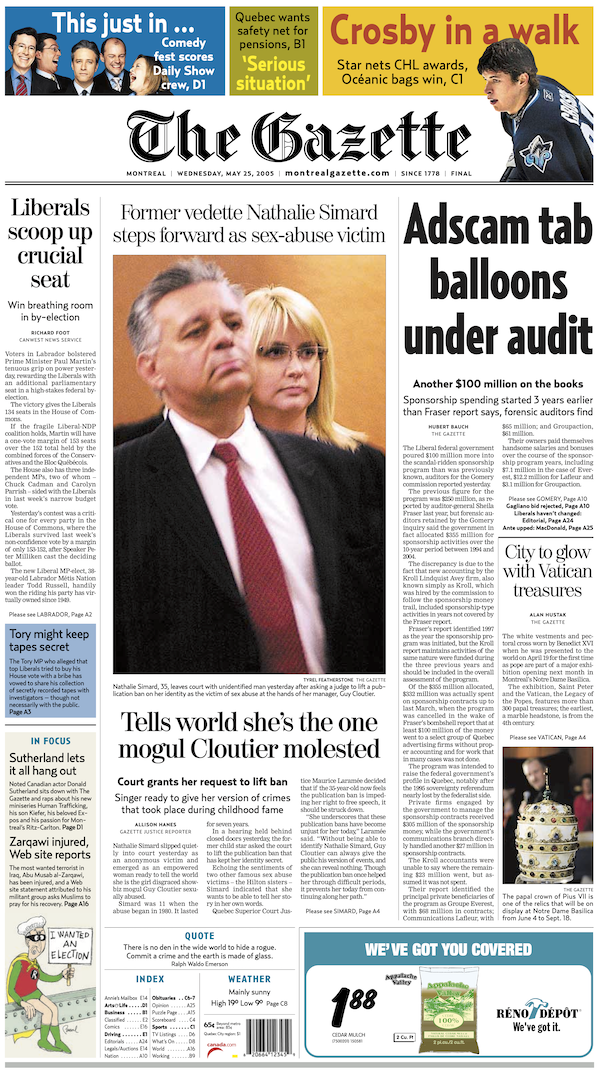 The front page: It’s the most visible part of the paper, and the one most carefully looked at. When I started, there was an editor every day whose sole job was to prepare this one page. And that editor had help — the night editor, who was in charge in the evenings, would keep an eye on it; a side editor would be responsible for writing the “rails” pointing to stories inside; a clerk would take care of completing the index; and yet another editor would handle the turns of these stories on pages A2, A3 and A4.

Nowadays, the design is different and fewer stories start on the front page, but the basics are the same. The index, weather and quote have moved to A2, and there hasn’t been a special A1 editorial cartoon in some time. 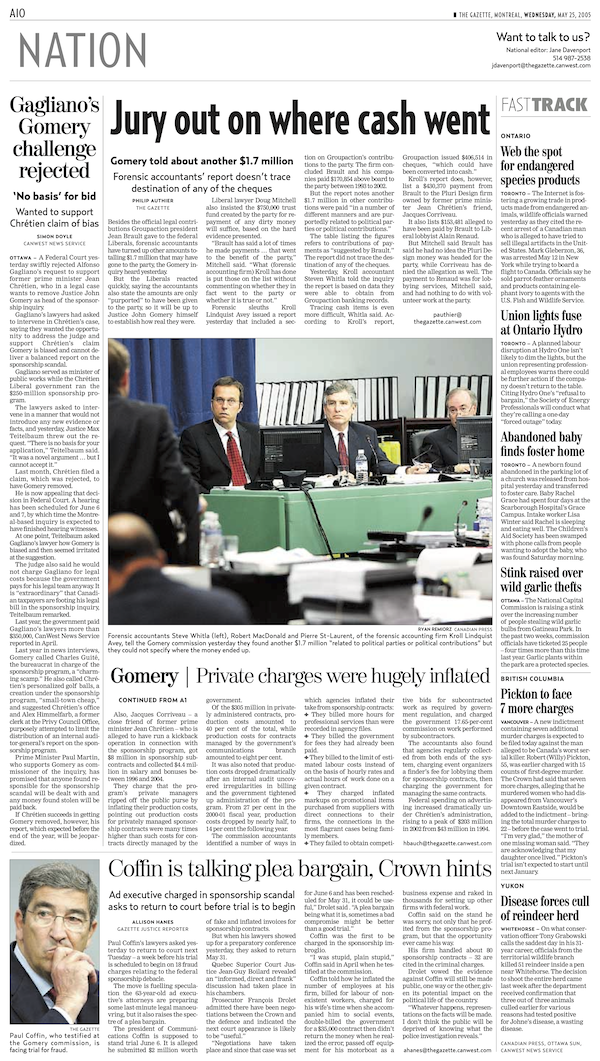 The Nation and World sections: In 2005, the newspaper’s A section was larger, and split between local, national and international news. Each had its own editor responsible for laying out pages, and they each had editors assisting them. My first job was one of these editors, known then as a “rim” because of the way long before my time they would sit around a table with the “slot” editor in the middle.

We didn’t have any dedicated international reporters, but we had two people in Quebec City, one person in Ottawa and another person doing analysis from Montreal, plus a managing national editor. Now, there’s just the one (permanent) person in Quebec City. 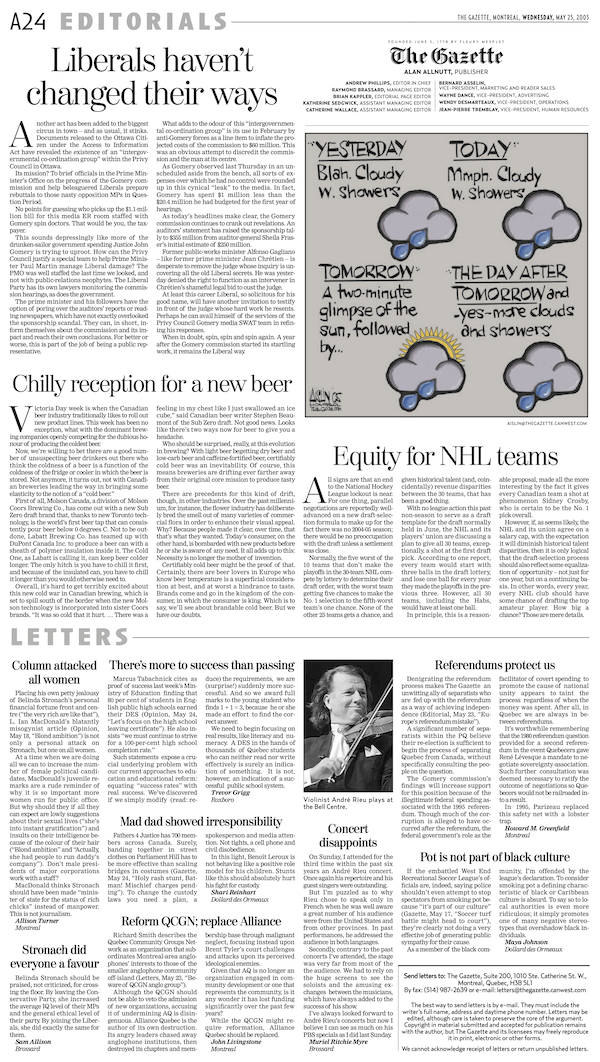 The editorials and letters page.

Opinion: Every day had multiple editorials, a bunch of letters to the editor, and faced a second page with columns and opinion pieces. Now editorials are a once-a-week thing, and everything is compressed onto one page, Tuesdays to Saturdays. 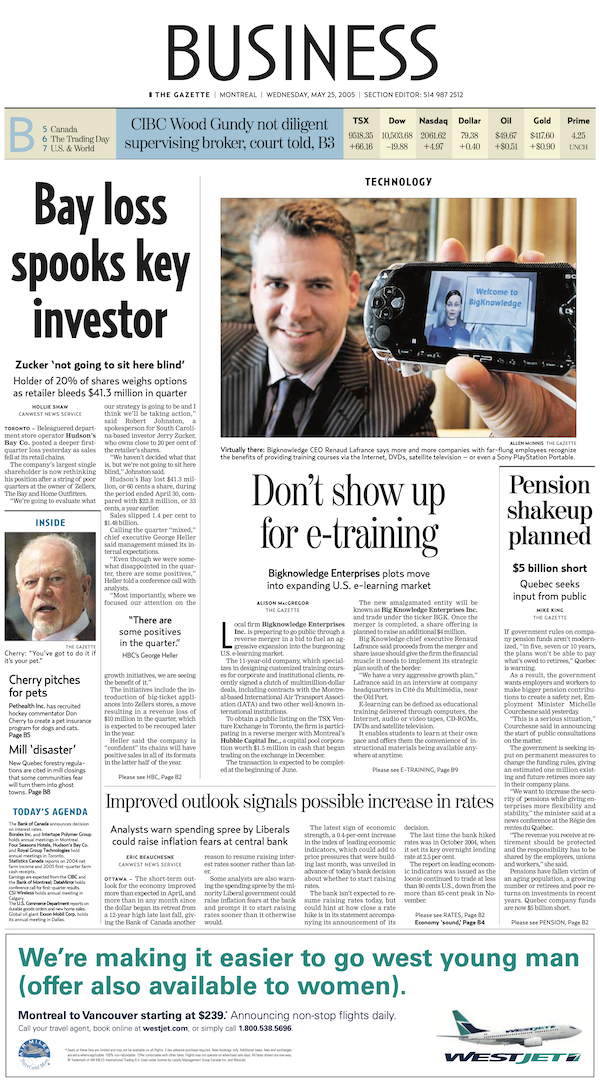 Business and Sports: Each section of the paper was its own department. There was a sports editor, a business editor, an arts editor, a life editor, each responsible for their own staff of reporters and columnists. Editors would be assigned to one section for a shift and work only in that section. Now, everything local goes through the same editing pipeline, and just about everything that isn’t local is edited centrally for all the Postmedia dailies simultaneously.

Now, instead of an editor and almost a dozen writers in the business department, plus regular columns on taxes, investing and legal affairs, there’s one journalist specializing in local business stories. Back then, every publicly traded company’s earnings report would be worth at least a brief. Now, it’s only worth reporting if there’s a larger story, and journalists focus more on features and analysis than the daily grind. 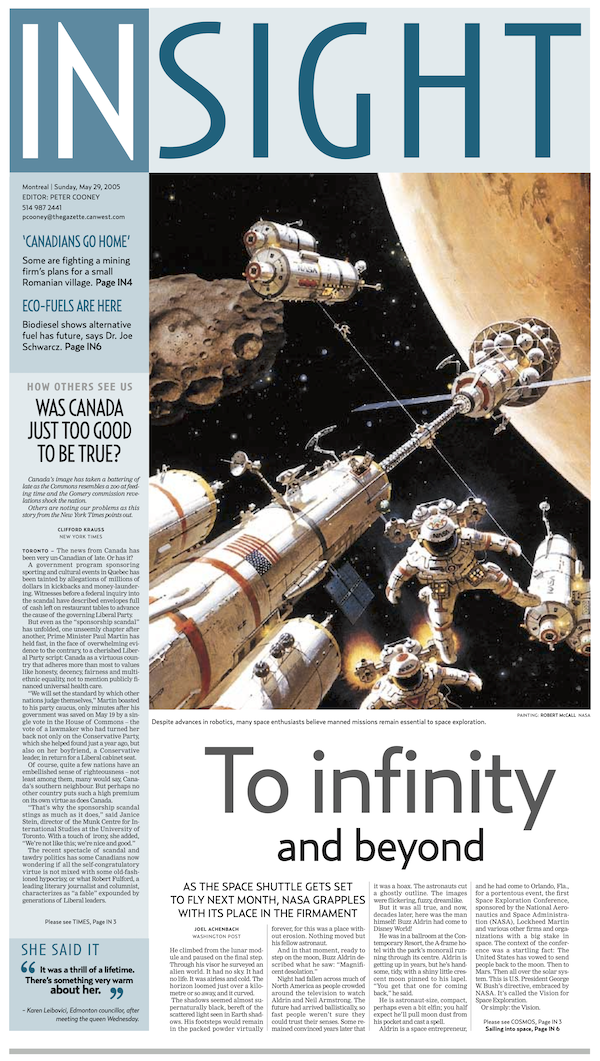 The Insight section on Sundays

Sundays: I miss the Sunday paper. It started in 1988 in response to Quebecor’s launch of the Montreal Daily News, which lasted less than two years. It wasn’t as thick as the other days of the week, but it was sports-heavy and had features like the Insight section edited by Peter Cooney, full of long reads (mostly by news services like the New York Times and Washington Post). It became a victim of cutbacks in 2010. 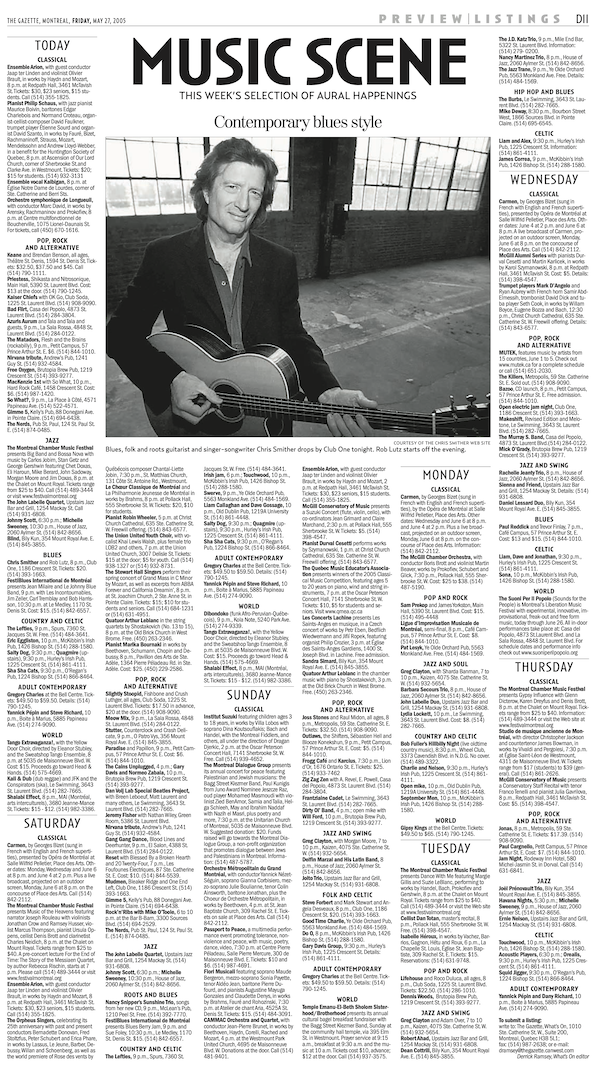 “Music scene” was one of several types of regular events listings.

Arts listings: Beyond the usual articles and feature stories, the paper had a huge library of regular features that used small type to get in as much info as possible, curated and edited by several editors in the newsroom. Things like Music Scene and Tip Sheet. But one by one, as those editors left or their services were more required elsewhere, the listings disappeared. The weekly movie listings and seasonal social calendar are about the only ones left that aren’t supported directly by advertising. 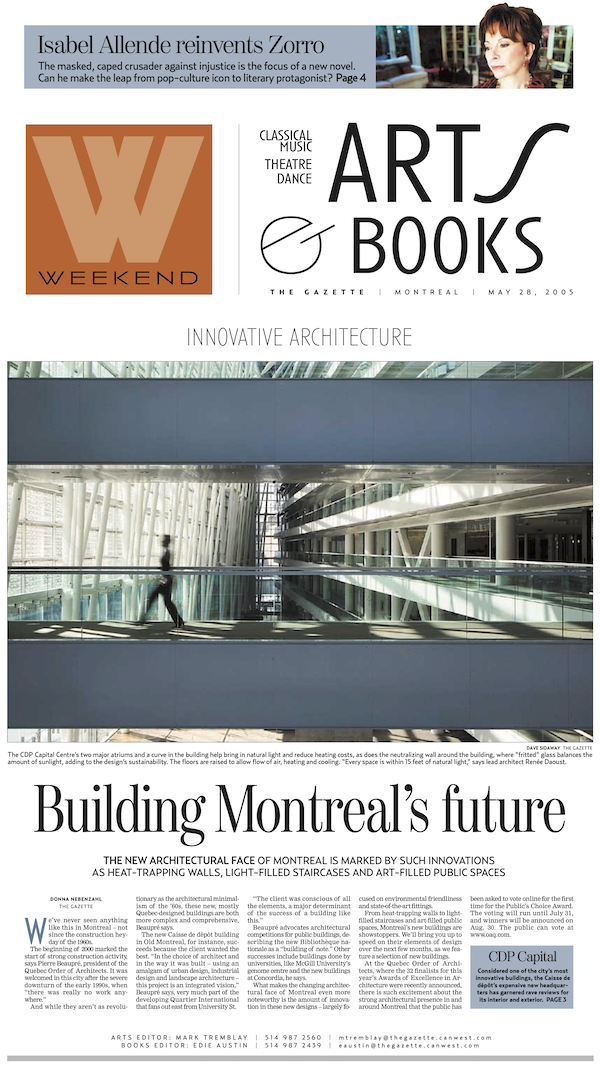 Weekend sections: The Gazette still has those, though they’re smaller than they used to be and don’t have as much local content. Books is down to a page, sometimes two, and Travel is also tucked into the back of another section now, but Weekend Life and Culture are still there. And the comics and puzzles haven’t changed much over the years, because the paper knows what readers really care about.

But the luxury of regular local columns about classical music, dance, children’s books, francophone music, francophone television, celebrity gossip, visual arts and theatre are no longer affordable when you have to protect your core function of news. 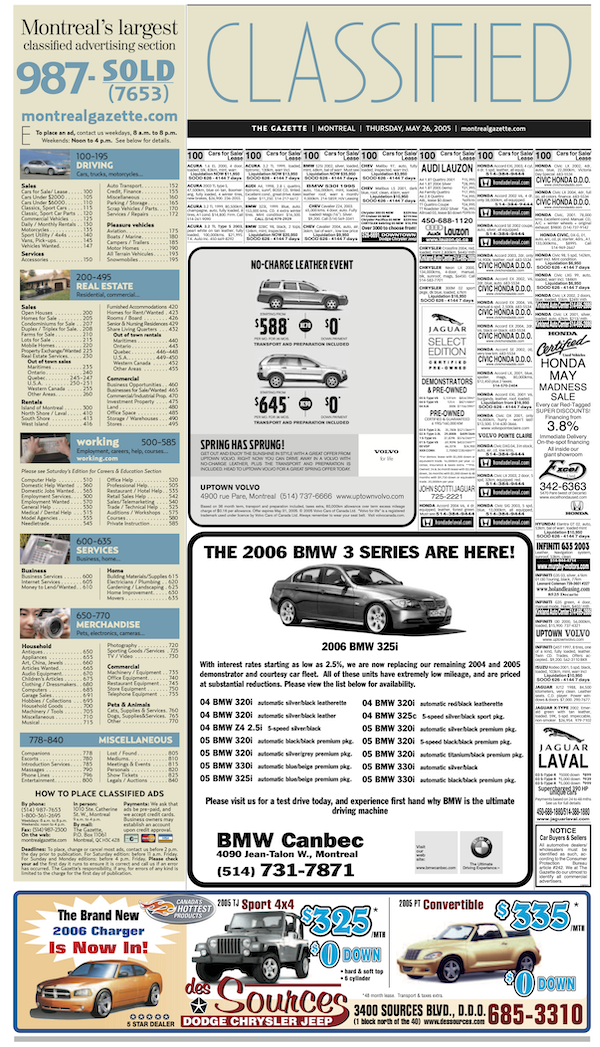 Classified ads used to be their own section.

Classifieds: To think that classified ads used to be their own section. That people paid good money for a tiny block of text in a newspaper that other people paid to read. By 2005, the classified section had already shrunk considerably, but it was still its own section most days (on Mondays, Tuesdays and Wednesdays it was fronted with Driving copy because of the car ads, and on Saturdays it was split into multiple sections). Now, people don’t bother buying ads for individual cars for sale or apartments for rent when they can put that online for free. Instead, there’s a handful of real estate listings and “we buy your gold” ads and the section is rarely more than a page.

Obituaries, which are about the same size as back then, take up much more space than classifieds now. 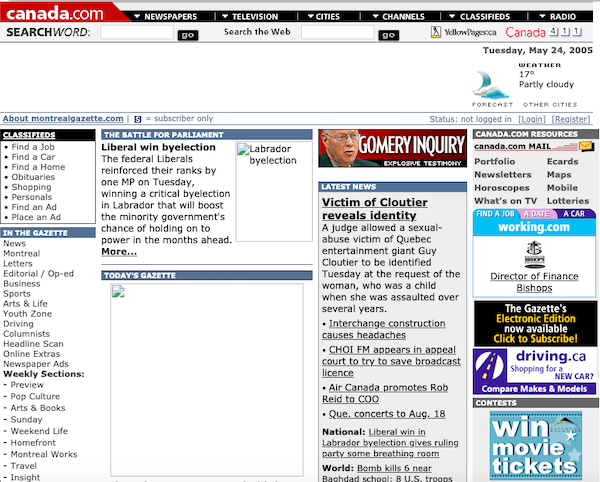 The website: Remember portals? Canada.com, Canoe.ca, Sympatico.ca, MSN.ca? Remember how awful they were? Yeah. When I started in 2005, there were no web editors. The website wasn’t really kept up to date during the day. Instead, it took copy from the newspaper overnight through its text database and automatically posted it to the website. No hyperlinks or photo galleries or even online-only stories.

As the years went on, more care was put into the website. Its address went from canada.com/montreal/montrealgazette to just montrealgazette.com. Local editors were assigned to work on it, and local reporters were trained to file breaking news stories and update them later instead of just waiting to file a full story at 5pm.

Eventually, in 2014, the Gazette launched its “2.0” website and moved its content management system to WordPress. The phrase “digital first” went from being a slogan to a workflow, and stories were written on the web platform and then exported for print use instead of the other way around.

The bottom line: A lot has changed in 15 years. Some for the better, like improving the online presence, and some for the worse, like the reduction in the number of beats. There are changes I supported and those I didn’t. There are old coworkers I miss and (a few) new ones I’m glad to have. There are parts of my old job I miss (like doing layout) and parts of my current job I prefer (like working in WordPress).

The Montreal Gazette (as it was officially renamed in 2014) is smaller, but more efficient and focused. Its changes are mainly a result of technology that has changed what readers want (fewer listings, though they tried taking away the sports scores page and quickly brought it back after readers demanded it return), what’s worth the expense (niche columnists) and what there’s a market for (much fewer classified ads).

14 thoughts on “For my newspaper, 15 years feels like a lifetime”