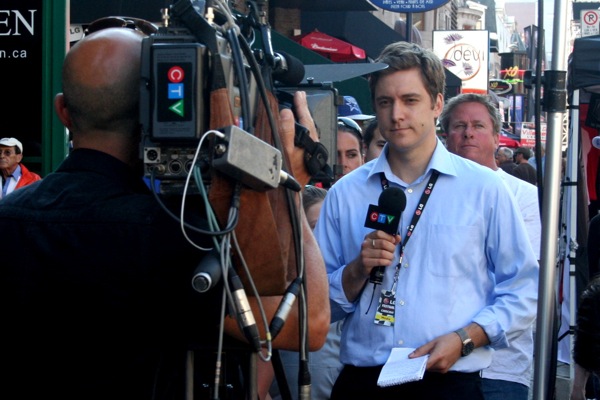 After taking a leave from his job long enough to have people wondering about his status, Paul Karwatsky has decided to leave his job as anchor at CTV Montreal to focus on autism awareness, a subject close to his family.

The news was announced to staff on Friday morning, leading to a story in the Gazette, and an announcement was posted to CTV’s website on Friday afternoon.

It included a statement from Karwatsky explaining his decision:

As many might know, I’ve been heavily involved in raising autism awareness for years. I’ve decided to dedicate myself full-time to this cause which is close to my, and my family’s, heart. It’s a key time in history for all those living with autism and so much needs to be done to ensure our children have all the opportunities they deserve as they grow. All my efforts will be focused on this moving forward. The details on what exactly I’ll be doing are to come.

Though it’s unsaid in the statement, the fact that changing his career would mean a more family-friendly work schedule had to be a consideration. He has been hosting both the 5pm and 11:30pm newscasts since the 5pm news was added in 2018, and the late-night news slot is tough for people with children. Previous anchors like *, Debra Arbec, Tarah Schwartz and Annie DeMelt who worked the late-night or weekend newscasts (or both) all left those jobs for more 9-to-5 ones, and only Arbec (the 6pm anchor at CBC) is still in the industry.

On Facebook, Karwatsky said leaving was a “massively difficult decision” and would provide more details about his future in the next few weeks:

This was a massively difficult decision. The outpouring of well-wishes I’ve been getting is overwhelming. I’m going to post a proper goodbye to everyone who sat through my bad jokes at home over the years . I really want to say that there is no better group of people than the hundreds and hundreds of Montrealers I’ve been privileged to meet who’ve supported our station over the years.. people who I truly feel are part of a huge extended family for me… a family I joined nightly all those years ago in watching CFCF when I was a kid. I’ll still be a part of that family watching from home. I can’t express how much I’ll miss being a direct part it all. But I’m excited about the future and some of the great things I’ll be getting behind. Details to come over the next few weeks! Thank you to you all.

Karwatsky’s departure was briefly noted during the 5pm and 6pm newscasts on Friday, the latter by Mutsumi Takahashi.

A brief thank you to Paul Karwatsky from Mutsumi Takahashi at the end of tonight's 6pm newscast. pic.twitter.com/GGwieK5PVb

CTV says it will name a replacement for Karwatsky. As it happens, all of the potential internal candidates are women. Caroline Van Vlaardingen would be the most obvious choice. Others with some anchoring experience include reporters Amanda Kline, Kelly Greig, Cindy Sherwin, Angela MacKenzie and Maya Johnson. If they really wanted to go for a man, the pool is much thinner locally. There’s … Rob Lurie?

When Karwatsky’s replacement is named, she or he will be Takahashi’s fifth co-anchor, after Bill Haugland, Brian Britt, Todd Van der Heyden and Karwatsky. Though because the two split the four daily newscasts, they don’t actually anchor together anymore.

UPDATE (Sept. 15): Karwatsky explains his new job in a video, and opens up a bit to the Gazette’s Bill Brownstein about how autism has affected his life as a parent.

*Correction: I listed Catherine Sherriffs as an example of someone who left a late shift for a 9-to-5 job, but in fact it was because she was being moved from the late shift to a day job that she decided to leave CTV.