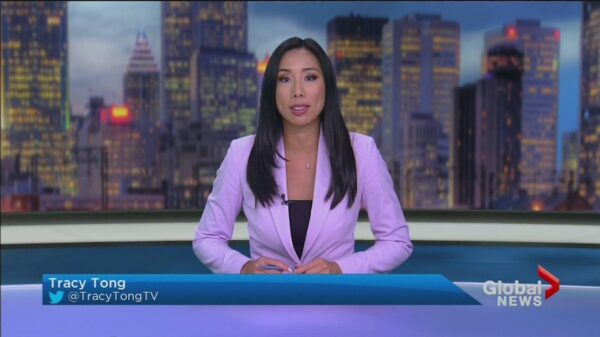 You can end the speculation of who will replace Jamie Orchard as lead anchor at Global Montreal: It’s Tracy Tong.

Hello #Montreal! I'm your new anchor on @Global_Montreal at 5:30pm & 6:30pm starting today. Tune in live on the @GlobalTV app or on Amazon @PrimeVideo. See you soon.

Tong announced the news shortly before anchoring the 5:30pm newscast on Monday. (Andrea Howick had been filling in on most nights since Orchard announced she had been laid off.) Tong has also been anchoring the 11pm Montreal newscast out of Toronto.

The move completes the conversion of Montreal’s local newscasts into Global’s “Multi-Market Content” model, which replaces locally-anchored live newscasts with a copy-paste edited newscast produced and anchored out of Toronto with a mix of local and national stories. Being recorded and produced in advance means Tong can do separate newscasts on Global Toronto and Global Montreal, even though they air simultaneously.

The 11pm and weekend newscasts were already following this multi-market model, and the noon local newscast is actually Toronto’s local newscast with a couple of minutes of Quebec news thrown in and Montreal and Peterborough weather added at the end. This leaves only Global News Mornings as actually being hosted in Montreal, and even then a third of it is a national feed out of Toronto.

At the same time, Global Montreal employees have been told that Focus Montreal, the weekly half-hour interview show anchored by Orchard and others, will not be returning.

It’s an unfortunate development that simply underscores how little Corus cares about its Montreal audience (and, for that matter, Toronto, Halifax, New Brunswick, Peterborough, etc., too).

But the company long ago gave up on trying to attract an audience for its Montreal newscast, competing against the behemoth CTV. Global has said centralization is allowing it to redirect resources to on-the-ground newsgathering, and to a certain extent that’s true — there are several young journalists at Global Montreal, and its reporting staff is larger than it has been in the past. But really it’s about saving money. There’s a reason these changes are being done in eastern Canada, where Global’s local news programs are unpopular, and not in Edmonton, Calgary and Vancouver, where it has higher ratings.

The copy-and-paste method of creating newscasts also opens up all sorts of wacky possibilities for on-air gaffes, and two were apparent on the first day.

During the 5:30pm newscast, Tong introduced a clip from that day’s Morning News, but the clip never ran. Instead, the newscast jump-cut back to herself introducing the next story like nothing happened.

An hour later, a story about a sign vandalized to carry a climate change message was set up as an anchor voice-over with B-roll and a short clip. Except they forgot the voice-over, so all we had was a minute and a half of mostly quiet B-roll. (The story ran fine during the 5:30 newscast.)

Technical errors are pretty common in TV news, especially when you’re doing something for the first time. But when news is done locally and live, the anchor can usually step in and apologize for the mixup. In Global’s pre-edited newscast model, that’s not possible, so viewers are just left scratching their heads wondering what they just watched. (This also apparently means no one is watching these newscasts before they air to flag problems like this.)

Then there are the things that were done intentionally to save money. Monday’s newscast included “extended coverage” that killed three minutes by running two long unedited clips from Quebec’s COVID-19 press conference that day.

The announcement of the new anchor prompted some outrage on Twitter, which led to Tong posting a follow-up tweet about the “amazing team of journalists on the ground at @Global_Montreal covering #Montreal #Quebec local news.”

But Global is hardly alone in these cuts. CityNews is also produced out of Toronto in a similar way, but without an anchor (at least officially). CBC considers its local newscasts expendable in a crisis (on Monday, because of “technical problems” just before airtime, CBC Montreal News at Six was replaced with CBC Ottawa’s local newscast, which was cut off mid-sentence at 6:30 to join Power and Politics in progress). And CTV, while still produced locally, does so without a sports department and with most journalists shooting their own footage. (It also cut the local news updates it added to Your Morning, with no word if they’ll ever return.)

The truth is that local TV newscasts have never been a profit driver, and so broadcasters are looking for ways to save money on them, especially when their ratings are poor. If it wasn’t for the CRTC obligation to run them to be able to keep their licenses, most would probably disappear entirely.

I’ve asked Corus for comment on the move and will update this if I hear back.