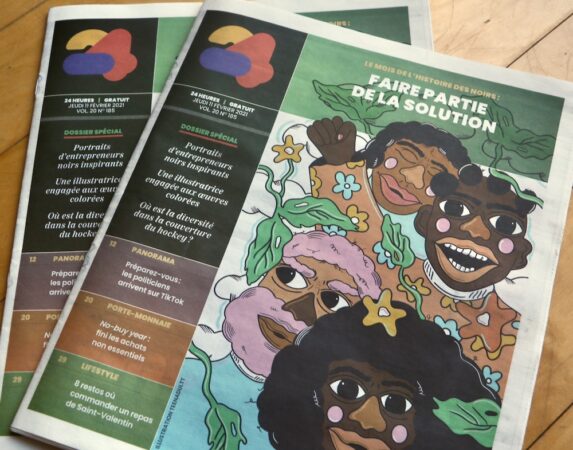 24 Heures, Quebecor’s free daily newspaper distributed in Montreal, has undergone a metamorphosis, one that makes it look a bit more like the next reincarnation of Ici than it does the 24 Heures of old.

This month, it launched a “new platform” at 24heures.ca (no more being just a subsection of the Journal de Montréal website), where it promises to “get to the roots of issues you care about, in addition to covering daily news, and inspired by solutions journalism,” according to a message posted on that website.

The website has some wire content, from Agence France-Presse, Agence QMI and Quebecor’s other websites like Silo 57, but most of it so far is from 24 Heures’s own writers. And while some of it is viral-content-churnalism, there are some real stories in there as well.

The print edition has the more major transformation. It now runs weekly, on Thursdays, and it has a new design and new logo. It’s also thicker — the first two editions are 32 pages each.

But it’s the content that’s most different. The issues are themed — Black History Month for Feb. 11, sex and social media for Feb. 18. You’ll see less hard news and more feature stories and columns, and those columns are new, younger and more diverse faces.

It’ll be interesting to see how long they keep this up. A newspaper is going to put its best foot forward for a launch like this, but a year or two down the line will we see more repurposed Journal de Montréal content?

You can read the digital versions of the paper editions of 24 Heures here.

This isn’t Quebecor’s first youth-focused free weekly newspaper. In 2009, it shut down Ici, its answer to free alt-weekly Voir. That was followed by the shutdowns of Montreal’s other alt-weeklies: Hour, Mirror, and finally last June, the remnants of Voir.

The new reality of the commuter freesheet

24 Heures’s move comes after competitor Métro changed its schedule last fall. After taking almost the full month of August off, it returned on a twice-weekly schedule, publishing Wednesdays and Fridays.

Both newspapers were hit hard by the pandemic, not just because of the dramatic reduction in advertising, which is their only source of revenue, but because fewer people are taking public transit and sanitary rules prevent them from having their human distributors at rush hours handing out the paper to passersby.

Métro and 24 Heures are the last remaining free dai… uhh, right they’re not daily anymore. But anyway, they’re the last of its kind in Canada. The 24 Hours chain was a victim of the 2017 Postmedia-Torstar paper swap, while the last Metro newspapers were shut down by Torstar in 2019.