The community radio station in the Mohawk community of Kanesatake north of Montreal can breathe a bit easier knowing that it can’t be de facto threatened off the air if someone sets up a new radio station.

On Monday, the CRTC approved an application from CKHQ-FM 101.7 to increase its power from 27 watts (max effective radiated power) to 51 watts.

The increase in power won’t do much for the station’s signal — it will still be almost impossible to catch outside Kanesatake and parts of Oka. But by increasing power to 51 watts, the station’s transmitter changes its class, from low power to Class A1. 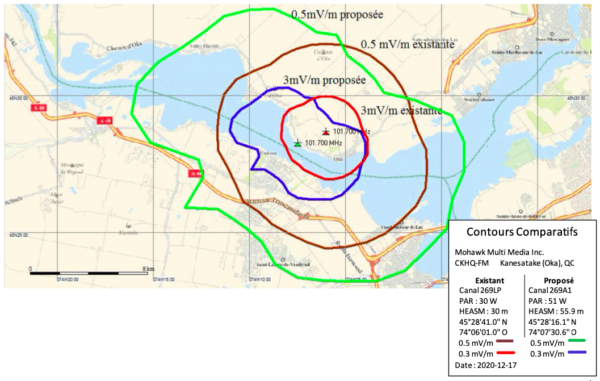 That scenario almost came to light in 2018 when an application was filed for a new station in Lachute at 101.7 FM. It would have forced CKHQ to find a new frequency, but with it being so close to Montreal, there aren’t other frequencies available.

In the end, the CRTC rejected the application on its own merits, giving CKHQ another chance.

CKHQ has two years from the date of the decision to apply the new technical parameters. It must also deal with outstanding compliance issues, notably the installation of an emergency alerting system.

One thought on “CKHQ-FM Kanesatake gets power increase, protected frequency”