They call them “driveway moments”, the segments so compelling that drivers will stay in their cars after they’ve parked because they have to hear the end of them.

For Ziua Pacalelii, who goes by “Zoo” on The Beat 92.5, one of those moments came earlier this week.

During a seven-second break between songs from 3:43:06 to 3:43:10 pm on Tuesday, Zoo gave the station ID, made a pun about Will Smith at the Oscars, asked people for their thoughts on Smith’s apology and teased music coming up from Doja Cat and Shawn Mendes when he felt an almost out-of-body experience. “It just felt like poetry pouring out of my mouth,” he said. “I could tell this segment was something special.” 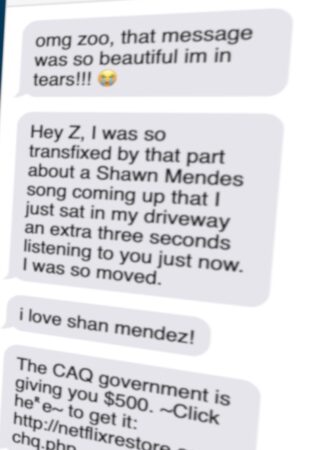 Some of the text messages that came across after a particularly touching seven-second on-air segment this week.

“The part where I asked people what they thought really resonated with a lot of listeners,” Zoo told me the next day. “People were like ‘wow, no one has ever cared this much about what I thought before.’ That’s the best thing to hear.”

Zoo says he’s looking forward to a shift in a few weeks when the program director thinks he can allow up to 20 seconds of chat between songs. “I’m spending every waking moment preparing what I’m going to say. If I’m going to keep someone in their driveway for 20 whole seconds, I gotta make it worth it.”