If you’re a print subscriber to the Montreal Gazette, you didn’t get a copy delivered this morning.

It’s not an error, it was a choice by my employer Postmedia, which has also ended print distribution of Monday editions of the Sun and Province in Vancouver, Herald and Sun in Calgary, Journal and Sun in Edmonton, and Citizen and Sun in Ottawa.

“The decision reflects the rapidly changing news consumption habits of our readers, the needs of our advertisers and the escalating costs of printing and delivering a printed product,” wrote Gerry Nott, Senior Vice President, Editorial, in a note published in those newspapers. 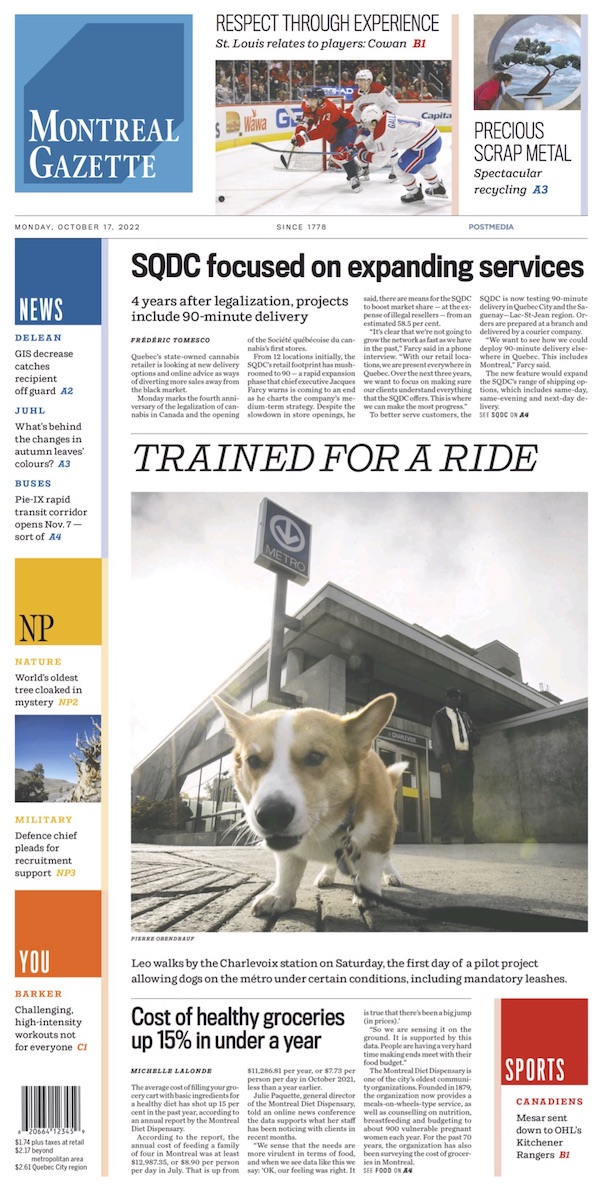 The Gazette is still actually producing a Monday paper — here’s today’s edition above — but it’s only produced for ePaper readers, those through the Gazette’s ePaper site or PressReader.

At the same time, the Gazette and other Postmedia papers are standardizing their comics and puzzle pages.

On the puzzles page, the only thing staying the same is the Wonderword. The New York Times crossword and Today’s Crossword has been replaced with the Universal Crossword. The bridge column and Annie’s Mailbox advice column are gone, replaced with the new Ken Ken numbers puzzle and letter puzzle 7 Little Words, and the horoscope now has a face with Eugenia Last writing it.

Both Saltwire and Postmedia said there would be no job cuts among newsroom staff as a result of the change.

If you’ve picked up a Monday paper recently, the cuts shouldn’t come as much of a surprise. Ads are few and far between these days. Years after classifieds dropped to a trickle of what they once were, display ads have also disappeared. The one saving grace for Mondays used to be car ads, with many newspapers running automotive sections on that day. But the car ads have dried up too, leaving reader subscriptions as the only real source of revenue. And that doesn’t nearly cover the costs associated with printing and distributing newspapers these days (to say nothing of the costs of creating them).

When the cuts were announced, I tried to compile a list of the Canadian newspapers still producing editions seven days a week. (The Gazette stopped printing a Sunday edition in 2010.) I came up with five, and quickly learned I was incorrect because one of them didn’t actually print seven days a week.

The Toronto Star, Toronto Sun, Journal de Montréal and Journal de Québec. Those were the four I could come up with still printing seven days a week. Two because they’re in Canada’s largest and most highly-competitive market, and two because Pierre Karl Péladeau still believes in print and made a big stink when La Presse cut its print editions.

The trend is pretty obvious. La Presse no longer publishes in print at all. Le Soleil and its sister papers are weekly publications now. Métro and 24 Heures are no longer dailies. It may be a matter of time until most daily newspapers in Canada shift from daily to weekly or drop print entirely. That’s in part because the internet is so much more efficient a way to deliver the news. And in part because newspapers are an old person’s medium with a business model that is becoming less and less viable.

The hope is that by the time this transition is complete, those newspapers will still have newsrooms that can be sustained with their digital revenues.

9 thoughts on “The end of the Monday newspaper”