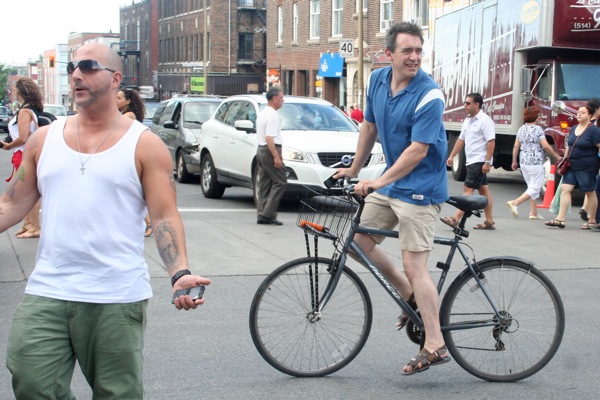 Alex Norris is on a mission. The former journalist, elected as a member of Projet Montréal in the last election as a city councillor representing the Plateau, is fighting what he considers an archaic unwritten rule of Montreal’s city council that sets minimum standards for “decorum” including the fact that all male councillors must wear a tie.

At the council meeting last week, Norris rose to debate a point about the city’s democratic process (namely the fact that people need to be registered to vote well in advance of voting day, something he considers undemocratic), when immediately councillors from the governing Union Montreal party rose up to object that he wasn’t following the rules.

This wasn’t the first time that Norris showed up without a tie, and council chair Claude Dauphin had made it clear at the April meeting that the rules would be enforced – meaning Norris would be expelled until he put a tie on.

It might have ended as simply as that, except Dauphin wasn’t chairing the meeting when Norris stood up. Caroline Bourgeois, of Vision Montreal, was filling in for him as he had other business to attend to. She refused to eject Norris, preferring to leave the decision to Dauphin when he returned. So instead, she pleaded with Norris to put a tie on so the council could continue its business, while councillors from Union Montreal objected with strong language (Marvin Rotrand called the move “infantile” and described Norris as a “juvenile delinquent”), and Vision’s house leader Anie Samson rose to object about the ways other people were objecting.

Fifteen minutes later, after Richard Deschamps spent a full minute complaining about the 12 minutes that had been wasted so far, Norris finally put on a tie and was allowed to complete his point.

It reminds me of my old days at Concordia Student Union council meetings in terms of the level of absurdity.

“There is in fact no dress code at City Hall,” Norris explained to me via email. “The speaker has traditionally imposed an unwritten rule requiring male councillors to wear ties but there is no basis for this rule in any bylaw or formal written code of any kind. There is a long tradition of progressive councillors objecting to this rule — and then giving in and forgetting about it, which is why we still have an archaic dress code whereas other big cities like Toronto and Vancouver have long gotten rid of theirs.”

Amazingly enough, there’s a body to deal with these kinds of things. It’s called the Commission de la présidence du conseil. But instead of taking a hard line either way, this body appears to have decided to leave it up to the chair of council to enforce “decorum”.

“Bourgeois, a young (and quite progressive) Vision councillor, had told me that she found the tie rule utterly archaic and ridiculous,” Norris wrote. “I surmised that in these new circumstances the tie convention would no longer be enforced. When I rose to speak, however, a number of Tremblay backbenchers went ballistic. I held my ground — briefly — to highlight the absurdity of the rule, then relented and put on the tie.

“So yes, this is a small protest — one to which I have devoted very little time or energy but one on which I have made my views known and will continue to do so, periodically.”

Norris stresses that this is his campaign and not that of his party. Luc Ferrandez and Richard Bergeron wear ties to city council meetings without complaint.

So why make this an issue?

“I think imposing any kind of dress code on a democratically elected body is anti-democratic and sends the wrong message about who we are and what we represent,” Norris wrote. “We are not meant to be a class apart from the people we represent; we are meant to be ‘of the people.’ Also, dress codes inevitably carry cultural and class biases. Is city council meant to be reserved only for business people and white collar workers? If so, how should we regulate women’s clothing? How low can a neckline go? How high a hemline should be permitted? And what about hijabs, kippas, turbans or any other type of attire for that matter? Where does it all end?

“Inevitably, a dress code carries biases of the sort that I think should be avoided in a democratic body representing a culturally diverse, cosmopolitan city such as ours. Ultimately, I think the final judges on this and on all other matters are the voters who elected us — and that neither Claude Dauphin nor any Tremblay backbencher should have any right to tell me or any other councillor how we must dress in order to be able to advocate on behalf of our constituents — just as I would not presume to tell them or anyone else how to dress at City Hall.”

Norris added that he didn’t see any ties on (male) candidates running against him during the campaign. “If we were good enough to win the votes of Mile End voters without ties, I figure we should be good enough for the council chambers without ties.”

As for wasting council’s time, Norris correctly points out that he wasn’t the one talking during those 15 minutes. He simply stood his ground on a rights issue he believed in and watched as others went crazy over the most minor of issues.

Will Norris resume his campaign during the next council meeting? We’ll see. He doesn’t want to distract the council’s business with such a simple issue, but he doesn’t want to surrender either.

UPDATE: I should point out this post on Coolopolis, in which a barber tells Norris to “get a tie!”

UPDATE (Aug. 25): This week’s council meeting (the first since the one in the above video) sparked a bit of media coverage about wearing ties, including a blog post by La Presse’s Ariane Krol and a column by Patrick Lagacé, who doesn’t own a tie (he has reaction on his blog).

UPDATE (May 19): Another incident at city hall, also ending with Norris putting on a tie.

UPDATE (Jan. 23, 2014): Another minor kerfuffle after Norris fails to wear a jacket.