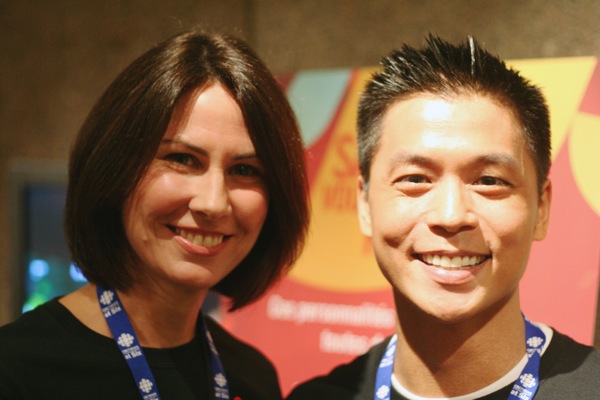 Debra Arbec and Andrew Chang before Chang abandoned Arbec and fled to the other coast. (Last chance to use this file photo, I guess.)

Two months after Andrew Chang left CBC Montreal on paternity leave and announced he wasn’t coming back, we finally know what super-secret job he’s taking on. CBC announced on Wednesday that Chang will be the new anchor of CBC News Vancouver at 5 and 6, starting Sept. 1.

Chang replaces Gloria Macarenko, who moves on to hosting CBC Radio’s The Story From Here, a “curation of stories” from local CBC radio stations. Macarenko will also continue hosting Our Vancouver, a  week-in-review and arts/lifestyle show, and do segments for TV, including a regular one-on-one interview segment.

The job is also one held by B.C. broadcasting star Tony Parsons until last December.

Chang, who filled in on The Current after coming back from paternity leave, won’t be replaced in Montreal. Debra Arbec will continue anchoring the evening newscast here solo. Though putting Doug Gelevan on the evening news full-time means she can be with him and weatherman Frank Cavallaro on promotional material and feel more like she’s part of a team.

“The team at CBC Vancouver has proven time and time again that they are the best at investigative and original journalism,” Chang is quoted as saying in a CBC News story, which I guess means that he thinks CBC Vancouver is better than CBC Montreal.

END_OF_DOCUMENT_TOKEN_TO_BE_REPLACED 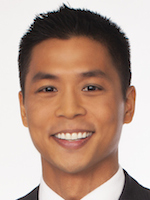 When CBC Montreal detailed the 10 jobs being affected as a result of the latest round of budget cuts, nine of those changes were well explained, but one remained mysterious, described only as a “reassignment”.

Now we know who it involves, though still not what the new assignment is. Andrew Chang announced on Wednesday’s newscast that he will be leaving Montreal for a new job at CBC. He said he couldn’t say where he’s going or what he’ll be doing when he gets there.

Chang has been at CBC Montreal for 10 years. (He started around the same time I worked there briefly. I remember because CBC user accounts for me and him were started at the same time, with the expectation that we’d both be around for a while. That wasn’t so in my case, though casual workers and interns for years would use my name to login to CBC’s systems, causing me to have some strange mythology there even in the years before this blog.)

After doing many different jobs at CBC, including being a reporter, he took over the anchor desk in 2009 with Jennifer Hall (now at CBC News Network) after Michel Godbout left. Though he was a young choice, Chang was instantly comfortable in the new position, able to mix gravitas of serious news and lightheartedness of news that wasn’t so serious. And though he was a hard worker, he never seemed to take himself too seriously.

Debra Arbec will continue to host the evening news on CBC Montreal solo. CBC tells me they’re not looking for a co-anchor for her.

Chang is expecting his first child in about a week (give or take the usual uncertainty with pregnancies). He’ll go on paternity leave, fill in as host of The Current for a week, and then go on to his new assignment.

Spent the last little while going through the mountain of well-wishing tweets you've all been sending. Thank you. Really.

END_OF_DOCUMENT_TOKEN_TO_BE_REPLACED 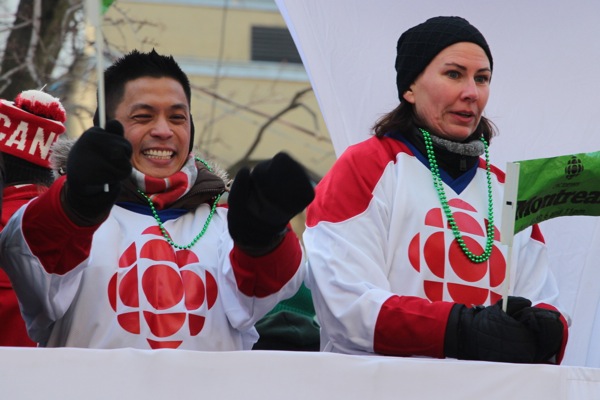 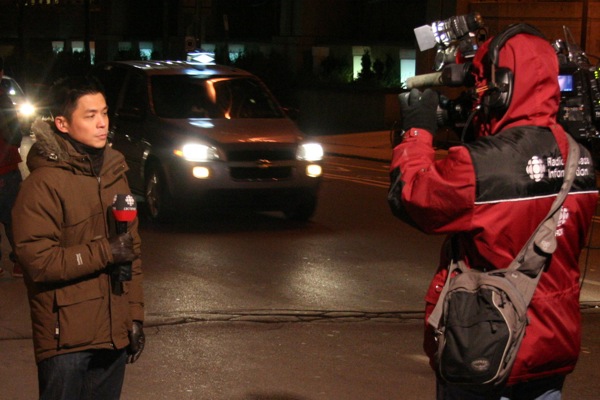 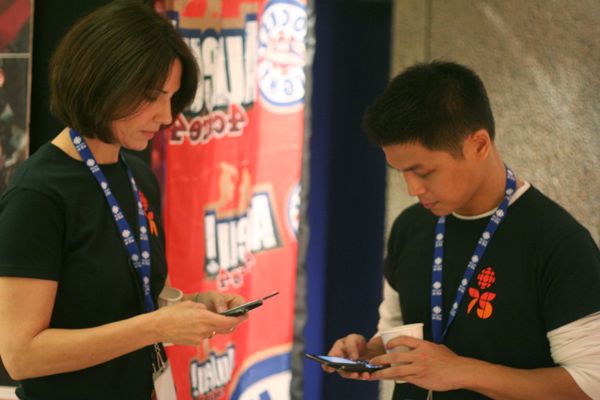 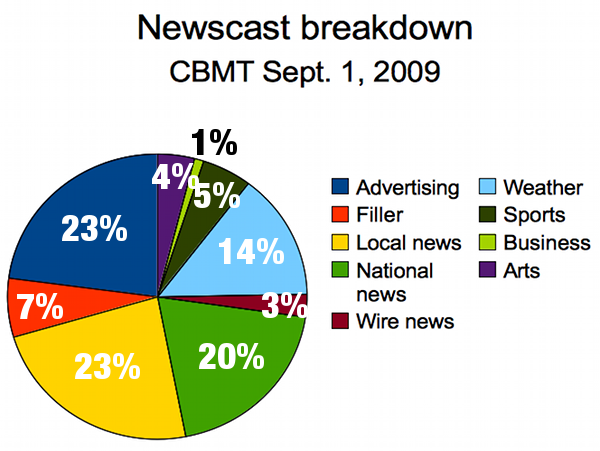 It was heralded as part of a renewal, a refocusing on local news and information that would bring people back to the CBC: Local newscasts in Saskatchewan, New Brunswick, Montreal, Halifax, Calgary and Toronto would be expanded from an hour to 90 minutes. This comes just a few years after they were expanded from half an hour to an hour.

There’s just one hitch: There’s no additional staff to fill that extra time. In fact, the CBC is having to deal with much fewer staff than it had last year. So the idea, the CBC says, is to have three separate 30-minute newscasts back-to-back, each giving a different angle on the top stories of the day. People could watch the entire 90 minutes, or they could just watch a 30-minute segment and get the top headlines.

That’s led to some criticism from the usual sources that the new newscast would be more repititious or even vacuous. The competition collectively yawned.

Yesterday, I watched the entire 90-minute newscast with my stopwatch laptop and crunched the numbers on how exactly they’re filling their airtime in these extra 30 minutes.

Here’s what I found. Note that these numbers are based on a single newscast, and so the average could be wildly different from what we see here.

As with my previous analysis, I broke the newscast down into major categories:

That actually doesn’t look too bad, but it’s more complicated than that, as you’ll see. 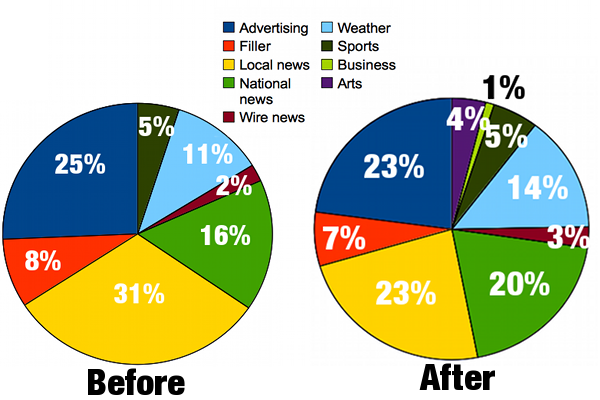 Comparing before and after, we see most proportions are about the same, but local news has taken a substantial hit, mainly at the expense of more weather and more national news.

Here’s the changes in chart form:

* Business numbers weren’t included in the previous charts, but represented about 1% of the average newscast. Arts numbers also weren’t included. The Scene is not presented daily, and was aired during only one of the three studied newscasts, where it was categorized as national news.

The CBC big-wigs say you could watch the entire 90 minutes, but you don’t have to, because the main headlines will be in each of the three newscasts, but each time a different angle will be presented.

But the story was the same. I don’t feel I learned anything new from the second time I watched it.

The repetition even got annoying at times. It led to at least one case where a story would be teased as “coming up” 13 minutes after it was reported (in the same half-hour block).

Of course, the real reason for all this kinda-repetition is the lack of additional staff. Five reporters presented local stories (four news, one sports). This is the same as the average from the 60-minute newscast. The number of (distinct) local briefs actually went down compared to the 60-minute newscast average.

Meanwhile, the use of national packages tells a different story. The number used was double the 60-minute average (8 vs. 4), and not a single one was repeated throughout the 90-minute broadcast. Not even the national and international briefs were repeated.

This forces us to ask: Why does local news need to be repeated in each of the three broadcasts, but non-local news doesn’t? Is national news (like, say, the fact that the Liberal Party no longer supports the government) unimportant? 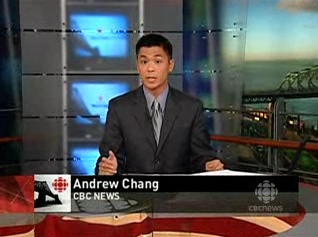 Andrew Chang is currently anchoring solo. He’ll be joined by Jennifer Hall starting next Tuesday. You could definitely see the bright green glow under that stylish suit as he somewhat nervously stumbled on the occasional line. But he was comfortable enough that it didn’t seem awkward. Plus, he’s adorable. I’m comfortable enough in my masculinity to say that. My gut feeling is that he’ll do a good job in the chair.

Michel Godbout, the former anchor and now a Really Important News Correspondent, seemed a bit odd in his new role. It wasn’t that Godbout was bad. Rather, having him talk to Chang in a split-screen (one designed in such a way that Godbout looked much bigger than Chang), it was hard to see Chang as the anchor and Godbout as the reporter. Especially because Godbout still has many of his anchorisms – explaining stories to us in the “now, what that means is” way that he would do so often in the anchor chair.

Let it not be said my criticisms are not constructive. Here are some suggestions for the new newscast(s).

Have any other suggestions? Add them below.

The new set at CBMT

Finally, the set looks like something that’s larger than a phone booth for once. Hopefully they get some good use out of it.

UPDATE (Sept. 9): Chang explains during one of the newscasts (Windows Media Video) the subtle diferences behind each. If you can’t see the video, here’s how it breaks down:

UPDATE (Sept. 16): Toronto’s newscast is about the same as ours. 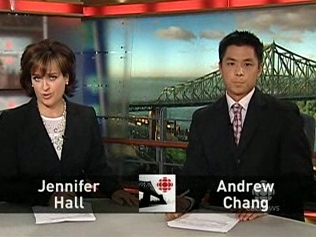