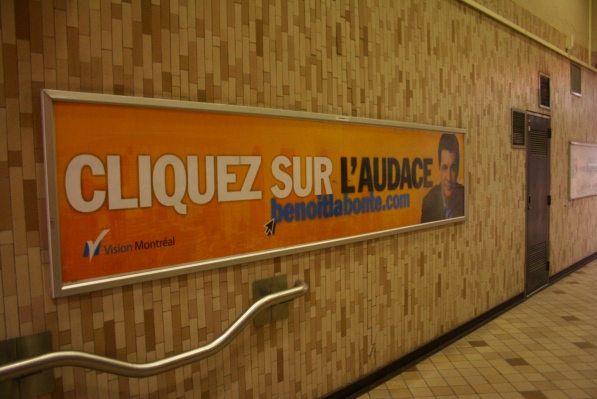 Better pull these ads quick. There's a minor update to them.

Well, it’s official. Benoît Labonté is stepping aside as leader of Vision Montreal so that former PQ minister Louise Harel can run in his place for mayor of Montreal.

I must say I’m surprised by this move. Not only does Labonté have a lot of ambition, but he’s made his campaign for mayor all about him. The Vision Montreal website still links to his blog, which has his face plastered all over it and is now useless as a campaign website (which makes his assertion that his cause “isn’t personal” absurd to the point of late-night comedy). They’ll replace it by one from Louise Harel (who will hopefully hire Labonté’s web designers instead of sticking with her current blog).

I could criticize Harel on many points. She was the person who gave us the whole megacity disaster (fortunately for her, residents of Hampstead and Beaconsfield don’t vote for Montreal’s mayor), and she wants us to just forget all that, saying “there’s no question of rekindling the debate.” She’s an evil sovereignist who spent most of her political career in Quebec City and can barely string three words together in English. And she shares Labonté’s habit of using lots of words that say nothing, not to mention his lack of humility.

But what gets me most is how matter-of-fact this all is. Five months before an election that Labonté has been preparing for more than a year, they have a meeting and just replace the leader.

The ease by which this happened reflects something I wrote about with Labonté in April: He and his party have no platform.

You can see it in Harel’s press release, just like in Vision Montreal’s “Manifesto”. There’s lots of talk of “true political and administrative leadership and attention to priorities,” but no discussion of what those priorities actually are. The only thing that ties Labonté, Harel and Vision Montreal together seems to be the only point of the platform so far: A dislike of Gérald Tremblay.

Actually, to be fair, there’s one other platform point hidden among the empty calories of text about “visionary leadership” and “bold vision”: a desire for a radical change to the borough system and more centralized power at City Hall. It’s something Labonté has supported and something Harel instituted with municipal mergers (though her bill created the mess in the first place).

But that still leaves a lot of blank that can be filled in by almost anything (provided it can be sold as bold and audacious) before November. They could fill it with Projet Montréal’s trams and greenery if they go through with a merger, as Harel hinted at. But I’d like to think that Richard Bergeron is smart enough not to tie his reputation to this sinking ship.

In the end, this probably says more about Vision Montreal and our city’s politics than it does any individual player. The parties can’t be pigeonholed like they can on the provincial and federal levels (Conservatives/ADQ xenophobic conservatives who want to dismantle the government piece by piece, NDP/Québec solidaire crazy leftists who want to pour even more tax money into inefficient black holes, BQ/PQ left-wing separatists who talk radical to get elected and then soften up when they get into power, Greens the environment nuts, and the Liberals the centre-left lesser of many evils who have the experience to run government and the experience to exploit their offices). We don’t really know what separates Union Montreal and Vision Montreal other than who’s leading them.

Like with Labonté, I’m willing to give Harel the benefit of the doubt, and look forward to reading her platform if eventually it comes out.

But right now it’s hard not to see the party of Pierre Bourque as a blank cheque to be cashed in by naive, ambitious politicians who want to parachute in and carpetbag their way into power based solely on their personal, vastly overestimated popularity combined with a lot of empty words from rejected Obama speechwriters.

UPDATE: Le Devoir agrees with me, asking why the left-wing Harel is uniting with the pro-business Labonté.

With only seven months to go until the Nov. 1 municipal election, Vision Montreal leader Benoit Labonté has launched his campaign, which includes ads like the one seen above as well as a blog which his duties as Ville-Marie mayor apparently leave him plenty of time to keep updated. (There are also the requisite YouTube, Twitter and Facebook pages)

Labonté, whose public persona is so poor he’s being outpolled by the city’s equivalent of Ralph Nader, has a lot of work to do in those seven months if he’s going to be competitive in this fall’s election – both in his race for mayor and the downticket races for city councillors and borough executives that his party’s future depends on.

His main fault is that nobody knows anything about him or what he’s about, other than his rather public falling out with Mayor Gérald Tremblay. That’s a problem entirely of his doing. When you see interviews or campaign videos, you hear words like “audace” and “espoir” and “intégrité” and whatever. But Tremblay could say the same about himself. There’s no differentiation between the two of them.

It’s not a question of message. The two men simply don’t diverge enough in their opinions. Labonté is big on sustainable development and green policy (for the most part – see below). But so is Tremblay. Labonté wants the private sector to contribute to make this city better. But so does Tremblay.

Labonté’s image problem stems from the simple fact that Tremblay has actually been a pretty good mayor. Sure, he’s had issues with the demerged suburbs, his executive committee performs far too much of the people’s work behind closed doors, the municipal bureaucracy is horribly bloated and the unions all hate his guts. But none of that would change in a Labonté administration.

I tried to look at Vision Montreal’s platform to see what kind of policies they would follow, what kind of bylaws they would pass and what kind of budget they would create that would be different than the current administration. But I couldn’t find one, either on Labonté’s website or on the Vision Montreal one. Even his political “manifesto” doesn’t include any specific ideas in its 2,347 words. The closest thing I could find were a couple of videos posted a year ago, including the one above, which outline some things he’s done as borough mayor. But I’ve already pointed out the flaws in these (to recap: his plastic bag recycling system creates waste where there was none before; his Parco-Don is a gimmick that isn’t bringing in much money; and to add a new one – his commitment to pedestrianization of streets is tainted by his demand to get rid of a reserved bus lane in the Old Port because it interferes with traffic and parking).

UPDATE (April 11): Spacing Montreal has links to show Labonté’s inconsistencies when it comes to his policies.

Labonté needs to figure out what he’s about. Perhaps my view is tainted by the fact that he lied to me the one time I interviewed him, but I don’t think I’m the only one whose first impression of him is of a self-obsessed politician who will pander to whoever is necessary to win an election.

Fortunately, he has seven months to fix that image and present a vision that has more ideas and fewer vague political clichés. 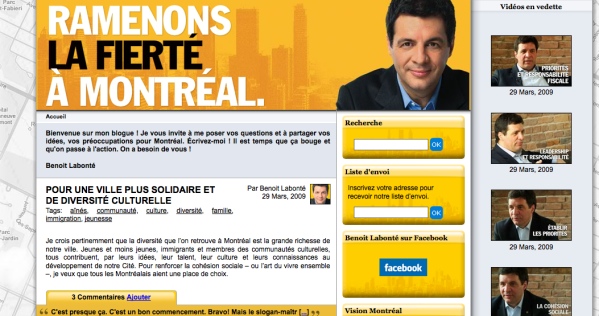 Benoit Labonté's blog has lots of pictures of him

Even Richard Bergeron is outpolling him in the race for mayor of Montreal.

So Benoît Labonté is running for the Vision Montreal leadership. Try to contain your shock.

Considering even well-informed Montrealers would be hard-pressed to name a single other member of the Vision Montreal party (Pierre Bourque? No, he retired, remember? Yeah), the chances of Labonté facing real opposition is about on par with the Quebec government announcing fast-track funding for a West Island metro extension. Nevertheless, he’s putting quite a bit of effort into his campaign, because he’s really starting his run for mayor.

He’s setup a website (look how visionary and leaderistic he looks, staring off to the side with a mild squint). It has some working links, including to his Facebook and MySpace profiles, and a blog at the easy-to-remember URL of http://www.benoitlabonte.org/content.aspx?ID=40d78367-3534-455c-9ed7-6641f3a220d1

I know I’ll be typing that one into my browser every morning.

He’s also on the YouTubes, his first video showcasing why he’s not just some other boring ex-businessman running for mayor: