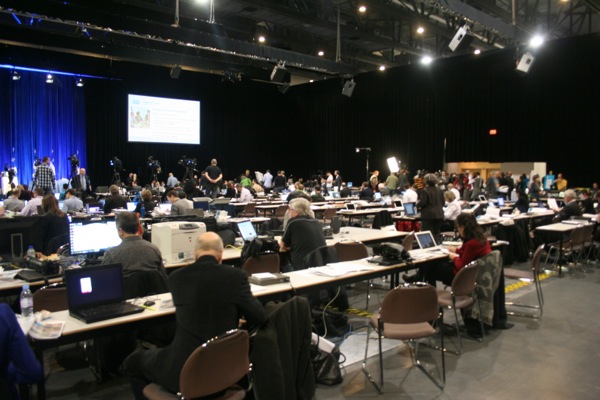 Thursday is Budget Day in Ottawa. It’s the day that the finance minister stands up inside the House of Commons and tells Canadians all the goodies that they can look forward to in the coming year: tax breaks, new spending, a tighter control over the deficit (or, even better, no deficit at all).

This happens just after 4pm. That’s because that’s when the markets close in Canada. Because of how dramatic an effect changes in tax policy and government spending or other government financial policies can have on business here, and how much people can profit from knowing these things before the general population, the release of budget details is strictly controlled. Anyone, even a minister, caught leaking information ahead of time is subject to serious penalties. (This doesn’t include hints that are publicly laid by the finance minister in the weeks ahead of a budget, to soften the ground a bit for the announcement.)

It’s partly for this same reason that the media are given access to the budget hours before everyone else. If they were given the hundreds of pages live at 4pm, there would be chaos as reporters and opposition politicians speed-read, potentially getting something important wrong and sending incorrect information out to the public. We saw the dangers of this last year with the Obamacare ruling at the U.S. Supreme Court, which wasn’t subject to a lockup.

That said, this isn’t just any embargo. There’s no communication outside the lockup. None. Not even the assignment editors or news directors know what’s in the budget until after the lockup ends at 4pm (the tradition is the lockup ends when the finance minister stands in the House to begin the budget speech).

I’ve always been curious what it’s like in one of these things. Thanks to my employer at The Gazette, I was given a chance to see it when the Quebec government presented its budget last November.

The week before, the city editor asked me if I wanted to go, saying she wanted a copy editor there so that stories could be edited inside the lockup and posted online immediately instead of being sent to an overwhelmed and underinformed Montreal desk at 4pm and posted one by one. I was given a laptop, a cellphone and booked a train ticket (business class! They served me booze and a meal!) and a hotel for two nights. It was the first time I’ve ever travelled on the company dime, and it was way cool.

Anyway, here’s what it was like inside that lockup.