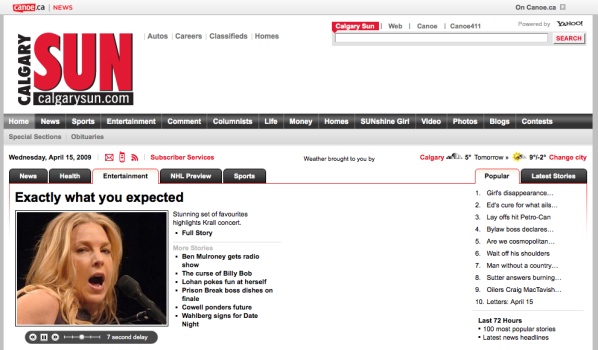 Actually, I should say Sun Media redesigned the Calgary Sun’s website. The new site is nearly identical to those of the Toronto Sun and Winnipeg Sun which have already been converted from the old Sun website layout (you know, the one that overused the Impact font and just looked so 90s in general?). Even 24 Hours and the Journal de Québec have most of the same layout styles. 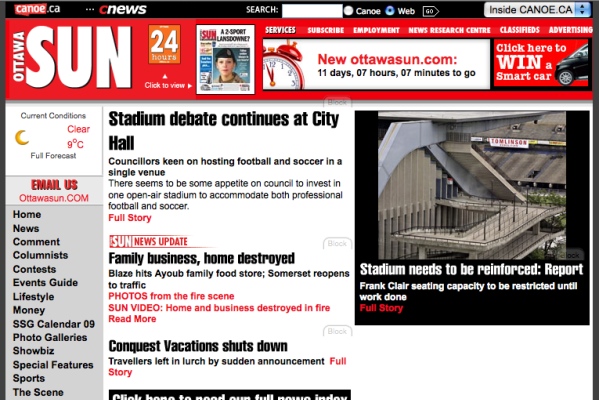 Two papers remain with the old, quaint web format: the Ottawa Sun and Edmonton Sun. Expect them to be switched over some time over the next few weeks.

It’s another example of the Sun chain going where Canwest has already gone. National news desks, centralized layout desks that create copy-paste pages, dumping Canadian Press in favour of its own in-house news service, electronic editions of its newspapers, laying off hundreds of people, and now white-label websites whose contents can be copied from site to site with the click of a button. (Not that the old Sun sites were that much different from each other of course, but this just furthers the process.)

In addition to the wider design that looks like all the other newspaper websites out there (in good ways and bad), a mobile version, and what is sure to be an improved backend, the new system allows reader comments on articles (or at least it says it does – I can’t find any articles with that feature enabled).