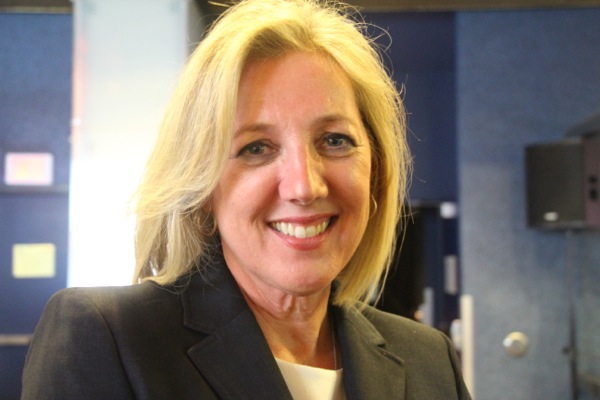 Caroline van Vlaardingen shouldn’t be nervous about being an anchor. She’s been an on-air figure at the station for … you know, I think you could actually measure it in decades, even though she doesn’t look that old.

Part of her experience at CFCF has included some hosting duties, too, including the series “On-Line Montreal” in the 1990s, a one-hour live talk show. (Ad-lib for a minute on live TV? Ha! Try doing that for a whole hour, she says with a laugh.) She’s also hosted the station’s telethon, and she’s been a reliable fill-in anchor for many years now, in addition to some part-time teaching at Concordia’s journalism program.

Still, she’s stepping a bit out of her comfort zone this weekend. Van Vlaardingen is taking over the weekend newscast from Tarah Schwartz, who’s leaving the country for seven months for personal reasons. (I won’t say why, but let’s just say there were lots of crossed fingers from her colleagues at Thursday night’s upfront presentation.)

Van Vlaardingen has the anchoring thing down pretty well, but she got some pointers from Schwartz about some things unique to the weekend newscasts. Among them is that, because the schedule runs from 3pm to midnight, the weekend anchor comes in with little time to familiarize herself with the news before the 6pm newscast. And the weekend anchor lines up her own late-night newscast, which is something that Van Vlaardingen is new to.

I asked her on Thursday whether she’d see herself permanently in the anchor chair. She said she enjoys doing reporting, getting out into the field. The weekend anchor job, which includes three reporting shifts during the work week, is a good mix of both roles, and one Van Vlaardingen is excited to do.

But Schwartz has no reason to worry. Van Vlaardingen is happy to go back to being a reporter once Tarah comes back. “I’m just happy to hold down the fort until she returns,” she says.