This week has a lot of changes for television both local and nationally. Two main reasons for this: it’s September and the fall season is starting, plus CRTC broadcast licenses for conventional television stations end on Aug. 31.

This week’s Bluffer’s Guide (courtesy of yours truly) looks at the changes happening on the local television dial. The Globe and Mail’s Grant Robertson also has a piece this morning, looking particularly at the upheaval at small money-losing stations owned by Canwest and CTVglobemedia.

Here’s a timeline of what’s going on this week in television:

Also of note this week are the 25th anniversaries of MuchMusic (video, CP story) and TSN.

Did I miss anything? Suggest additions below.

After putting the five conventional television stations comprising its secondary E! network (formerly CH) on the block for a “strategic review”, the results are in:

Get the news from your favourite source:

The decisions mean the end to the E!/CH network.

CTV closes one, sells one, keeps one

Meanwhile, after Shaw backed away from buying three CTV stations for $1, there is similar mixed news at those stations:

This leaves six A-channel stations left, including CHWI and the cable-only Atlantic A network.

The CRTC on Monday decided to hike the fee (temporarily, at least) for its Local Programming Improvement Fund from 1% to 1.5% of cable and satellite provider revenues (revenues, not profits), which would give broadcasters an additional $32 million a year ($100 million total in the new fund) to devote to local programming.

You can see all its arguments in the official decision. It’s less than the 2.5% that a parliamentary committee suggested in June.

It’s a victory for broadcasters and a defeat for cable and satellite companies (and probably consumers). CBC is happy. Canwest is happy. CTV is happy. Bell is sad. Cogeco is sad (PDF). Rogers is sad. Videotron is sad. Bill Brioux is annoyed.

Especially when you consider how much the television industry is already subsidized through mandatory fees from cable and satellite companies (now 6.5% of their revenues) and funding from the government, all without us having a say in programming, you have to wonder whether it’s all worth it.

Best of all, the broadcasters say they need more.

The CRTC also released its conditions of license for one-year renewals for the major networks:

Many of the decisions below come from these renewals.

Finally, the CRTC has kicked the fee-for-carriage can (which was in turn kicked to them by a parliamentary committee) and other issues down the road to a hearing in September, where it will discuss that and other issues affecting broadcast television. The indication, however, is that the CRTC supports a fee-for-carriage idea, provided the fees are negotiated with broadcasters and cable/satellilte companies.

And how much more local programming will we be getting for all this extra money? We won’t! In fact, we’re getting less! Thanks to new “harmonized” minimum requirements, most stations in the country will now have to produce less local programming.

For English-language stations, the minimums will be 14 hours a week for large markets (Toronto, Ottawa, Edmonton, Calgary, Montreal, Vancouver), and seven hours a week for smaller markets (including Halifax, Hamilton and Victoria), with some exceptions. This will mean reductions for CKMI (18 hours a week) and CFCF (15.5 hours a week). Stations with really high requirements might see massive cuts and layoffs. CHCH Hamilton, for example, has dropped from 36.5 hours to only seven, though they’re going to make a go at more local programming, at least in the short term.

For French-language stations (effectively just TVA since TQS has a special exception), it’s on a case-by-case basis:

Note that for French markets, only Montreal is larger than a million and is ineligible for LPIF funding.

In the same decision, the CRTC also rejected requests from broadcasters to eliminate requirements for priority programming (expensive dramas) and independent production (as opposed to in-house).

After again rejecting union complaints that Global’s produced-out-of-Vancouver plan violates local programming requirements for Global Quebec (not saying it wasn’t in violation, only that there is “insufficient evidence” and it will “continue to monitor the situation”), the CRTC has approved a request to change CKMI from a Quebec City-based regional station to a local Montreal-based station.

CKMI-TV was once based in our provincial capital, but since it was purchased by Canwest and turned into a Global station it has effectively been headquartered in Montreal, with retransmitters in Quebec City and Sherbrooke (technically, the transmitter was in Quebec with a retransmitter, CKMI-TV-1, in Montreal). Global Quebec was licensed as a regional station, which meant it couldn’t take any local Montreal advertising. The license change makes it a local station which opens up that door (as small as it is) and allows the station to compete directly with CFCF and CBMT for local advertising.

A similar move was made for CIII, which is de facto Global’s Toronto station but was technically licensed to Paris, Ontario, which is west of Hamilton.

A request from Canwest to relieve money-losing ethnic station CJNT Montreal of its ethnic programming requirement was denied. Canwest wanted 5 hours a week, but will be stuck at the original 13.5. Since the station is being sold, it won’t sadden Canwest too much to lose this battle.

Mandatory digital transition (or not?)

The CRTC recognized that some broadcasters are lagging behind in transitioning to digital. U.S. broadcasters were forced to make the switch last month (in a deadline that was delayed from February), but Canadians have until August 2011. The CRTC’s decision doesn’t suggest that this deadline will change for smaller markets (though it suggests perhaps a “hybrid model” may emerge), but it does say it “expects” that major markets will make the transition. It released a list of markets larger than 300,000 it “expects” will do so without complaint, and says it will discuss the issue further in September. The list includes Montréal, Quebec, Trois-Rivières, Sherbrooke, Rivière-du-Loup, Saguenay, Ottawa-Gatineau, territorial and provincial capitals and large cities across Canada. Essentially any market with more than one station.

The issue (which also includes whether there should be U.S.-style subsidies for converter boxes) will be dealt with again in September.

Even though Shaw’s offer to buy them has fallen through, the CRTC has renewed licenses for CKX-TV in Brandon, Man., CHWI-TV in Wheatley/Windsor, Ont., and CKNX-TV in Wingham, Ont., for another year, despite CTV’s request that they be terminated. They’re still expected to shut down in August, although CTV says it is “reviewing” CHWI in light of the new funding. UPDATE: CTV says it will continue operating CHWI until Aug. 31, 2010. CKNX will be converted into a retransmitter, and CKX is still being shut down.

Other CTV stations which had the bare minimum of local programming have been relicensed as strictly retransmitters only:

Separate requests from Canwest and Rogers to allow them to duplicate content on E!/Global and City/OMNI respectively were denied by the CRTC. The stations (CHAN-TV Vancouver/CHEK-TV Victoria, CIII-TV Toronto/CHCH-TV Hamilton, and City/OMNI pairings in Toronto, Calgary, Edmonton and Vancouver) are currently limited to 10% overlap since they are stations with the same owner in the same markets. Requests to be relieved of that restriction were denied.

In addition to allowing more overlap between City and OMNI, Rogers asked to be allowed to redirect “priority programming” money (money for expensive Canadian dramas) into local programming, and remove an unusual requirement at City to air Canadian feature films. Both were denied. The Globe has a story.

RNC Media has applied to the CRTC for a license amendment for CHOI-FM in Quebec City, which would change it from an alternative rock format to 50% spoken word. CHOI has a rather rocky past with the CRTC.

The CRTC has released financial statistics of Canadian radio stations (taken as a whole). Looking at all of Canada and Quebec in particular, the numbers are fairly stable on both sides of the balance sheet. Of particular note is AM radio in Quebec, which shows significant losses year after year while the rest of the country just about breaks even.

Asian Television Network has gotten approval for a slew of new specialty channels:

Another two networks – ATN Multicultural Channel and Commonwealth Broadcasting Network – were denied, as their nature was judged to be too broad for a specialty service.

ATN announced on Tuesday that nine channels, including some of the ones above, will premiere on Rogers Cable in the fall. The channels are being renamed to more interesting names.

Ashes to ashes, SCREAM to DUSK

Corus is rebranding its SCREAM! horror channel to DUSK, and expanding its niche to include “paranormal” and “supernatural” stuff that might not be so scary. I guess this means more X-Files? The change takes effect on Sept. 9 (09/09/09, as if that’s scary or paranormal or something).

Hey, remember a couple of months ago when Shaw said it would buy three endangered CTV-owned stations for $1 each in what seemed like the most insincere offer in the history of mankind?

Yeah, turns out it was a giant bluff. After going over the books for the three stations, Shaw determined that they are, indeed, losing quite a bit of money and it’s not worth the CRTC brownie points and good PR to sink more cash into the stations. CTV issued a brief statement Tuesday afternoon saying Shaw reneged. Media outlets have repeated the statement, but Shaw and CTV aren’t commenting further yet, and the stations can’t comment because they don’t know what’s going on.

This comes (coincidentally?) on the same day Canwest announced it will offload two stations onto Channel Zero.

So CKX-TV in Brandon, Man., CHWI-TV in Wheatley (Windsor), Ont., and CKNX-TV in Wingham, Ont., go back to being endangered and unless another buyer can be lined up they won’t last past the summer.

The optimism they had when the deal was announced now flies right out the window.

UPDATE: Canadian Press is the only outlet that finally tracks Shaw down to get comment. They say they expected real television stations but saw hollowed-out shells where much of the work was done in London and Toronto. Meanwhile, CTV says it will keep CHWI running for another year after getting more money from the CRTC.

END_OF_DOCUMENT_TOKEN_TO_BE_REPLACED 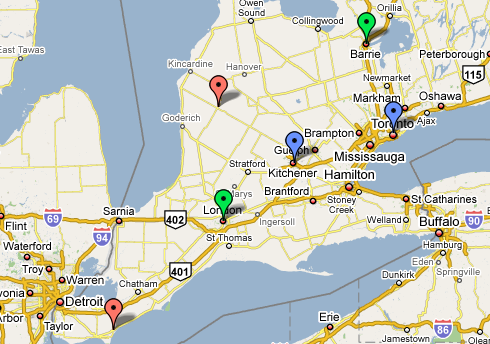