While the big news of the day was its approval of the Shaw-Rogers purchase, the CRTC also approved a pair of smaller transaction on Thursday, in which Quebec’s Cogeco Media and Arsenal Media agreed to sell stations to each other.

Under one deal, Arsenal acquires, for $1.5 million, three stations in the Abitibi region:

In the other deal, Cogeco acquires, for $600,000, one station from Arsenal in Saguenay:

The Abitibi sale didn’t bring up major issues, except for the fact that they were formerly RNC Media stations, which Cogeco bought in 2018, which means there are still tangible benefits related to that transaction. Cogeco has agreed to continue to pay those benefits despite no longer owning the stations.

Arsenal plans to convert the stations to its brands, which include O, Plaisir and Hit Country. They will be Arsenal’s first stations in the Abitibi market, adding to its 16 stations in regions throughout Quebec.

For Saguenay, there was a bit of a thorny issue in terms of competition. Because Cogeco owns another station in Saguenay, and a third in nearby Alma, there was concern it might exceed its ownership limit. Analysis showed the Alma station didn’t cover enough of Saguenay to be an issue, but there was some overlap in the Alma market. Nevertheless, because no other broadcasters complained and Cogeco said it would not seek out advertising in Alma from its Saguenay stations, the CRTC allowed the acquisition to proceed.

Cogeco plans to convert CILM-FM to a Rythme FM station, giving the network a presence in all five of Quebec’s largest population centres and more than half the province’s population.

As a result of this issue being decided, the CRTC has reopened a proceeding into whether Rouyn-Noranda should get another radio station. Josyane Cossette has applied for a commercial radio station while CHOW-FM (Radio Boréale) in Amos applied for a retransmitter in Rouyn-Noranda. Other broadcasters can file applications to compete with these if they want to serve the market.

A proposed mutual sale of radio stations between Cogeco Media and Arsenal Media will have to get over a hurdle to get approved by the CRTC, and it depends a lot on how many people live in a small region between Saguenay and Alma.

On Tuesday, the CRTC published the applications related to the transfers of ownerships of these stations, and we have more details on the sales:

For Arsenal, the deal should not pose much of an issue since it doesn’t have any assets in the Abitibi region.

But in Saguenay, it’s a different story. Cogeco owns one radio station in Saguenay, CKYK-FM (Kyk 95,7), but it also owns CFGT-FM (Planète 104,5) in Alma, 45 kilometres away near Lac-Saint-Jean.

The CRTC actually has a policy for cases like this, and it depends on how much overlap there is between stations, measured both by their markets and their signals. 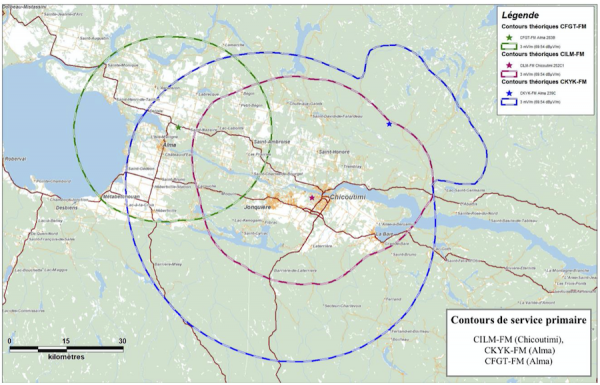 Under CRTC policy, if there’s more than a 15% overlap, then they are considered part of the same market, and if there’s less than a 5% overlap they aren’t. In between, it depends on where advertisers are from and what news the station broadcasts. 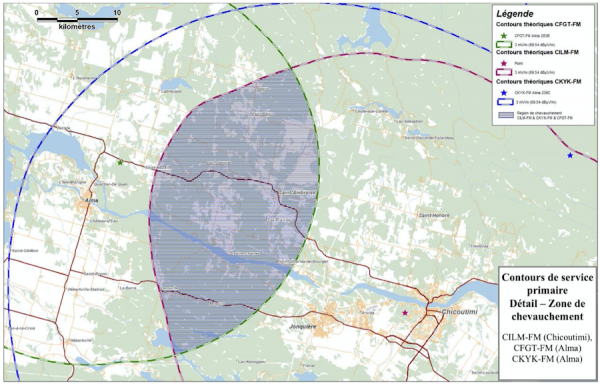 The two signals do overlap between the two cities, but it’s in a mostly rural area of St-Nazaire and St-Ambroise, with a population under 8,000.

The commission counters that Cogeco should have based the percentage on the size of the market (Alma) and not the size of the station’s signal. Using that calculation, the overlap is within that 5-15% grey zone. Cogeco notes in a response that less than 1% of CILM-FM’s ad sales are from Alma.

Setting aside the CRTC’s specific rules, common sense can make both cases in such an argument. On one hand, CFGT-FM clearly markets itself as an Alma station, while CILM-FM clearly targets Saguenay. On the other hand, the overlap in signals is not insignificant, CKYK-FM targets both markets, and plenty of people outside a station’s primary signal contour will still listen to it, especially in an area like Saguenay where there aren’t a plethora of neighbouring markets.

There’s also the matter of the station’s future. CILM-FM is not a very profitable station (except just barely last year thanks to government pandemic subsidies), and never really has been. In fact, it was the one station owned by Corus in 2010 that wasn’t sold to Cogeco because Cogeco didn’t want it at the time. Corus was considering shutting the station down before a local group of investors stepped in. They eventually resold the station to Arsenal.

Arsenal makes it clear in the application that it would be “difficult” for CILM-FM to reach profitability under its control. The two say that Cogeco, with its bigger pockets and its synergies with other stations in the region, would have a better chance at making the station work.

Similar arguments were not made about the Abitibi stations being sold to Arsenal.

The CRTC will hold a pro forma hearing Dec. 6 to consider the applications. No presentations are planned, unless the commission is convinced of the need for them by the interventions submitted. The commission is accepting comments from the public until Nov. 4, which can be submitted here. Note that all information submitted, including contact information, becomes part of the public record.

The CRTC has approved the $18.5-million acquisition of 10 RNC Media radio stations by Cogeco, representing two thirds of RNC’s network of stations.

Of the remaining stations, two are being sold to Leclerc Communication:

The remaining three are presumably on the market with no sale announced yet (but I’m told there are talks with at least one potential buyer):

The acquisitions bring Cogeco’s radio network from 13 to 23 stations, and means Cogeco’s first expansion into the Saguenay and Abitibi regions. Of population centres over 15,000, the only ones that wouldn’t be within 100 kilometres of a Cogeco transmitter will be Rimouski and Sept-Îles.

Notable aspects of this transaction:

RNC Media is vastly decreasing its role as a major radio broadcaster, and has agreed to sell 10 of its 15 radio stations to competitor Cogeco for $18.5 million.

The sale leaves RNC Media with five stations in its three largest markets:

Cogeco already has two French-language FM stations in Montreal and Quebec City, which means there was no point in Cogeco acquiring them. It has one station (CKOF-FM 104,7) in Gatineau. The acquired stations will be its first in the Saguenay and Abitibi regions.

RNC Media also owns TVA and V affiliates in Gatineau and Abitibi-Témiscamingue. It recently announced it was shutting down its Radio-Canada affiliate in Abitibi, CKRN. RNC said the Montreal, Quebec and Gatineau stations were “not on the market.”

The sale requires approval by the CRTC before it can proceed.

We should also expect some of these stations to join Cogeco’s network brands, particularly Rythme FM.

END_OF_DOCUMENT_TOKEN_TO_BE_REPLACED

Sam Zniber, who was brought in almost two years ago to manage programming at The Beat 92.5, is no longer employed by the station.

Cogeco Media President Richard Lachance says the company (which recently changed its name from Cogeco Diffusion) is undergoing a corporate reorganization, and “Mr. Zniber did not form part of that plan.”

Staff was told about Zniber’s departure on Monday, without being given much of an explanation for it. According to one Beat staff member, he was supposed to be coming back to work after a sick leave.

Lachance rebuffed several of my attempts to explain the nature of the corporate reorganization, whether it would result in fewer managers, or whether The Beat would continue to have its own management. Lachance said he did not want to discuss the plans before they are announced to staff, which he said should be done within the next month.

Zniber was a surprise choice for PD in 2014, since he had no experience in the Montreal market or even in Canadian radio. He had worked in France, the UK, Australia, and Miami. This was his eighth job since 2000, according to his LinkedIn profile.

Zniber’s legacy at The Beat is mixed. During the 2014-2015 winter ratings period, the station jumped to a surprise 20% market share, well ahead of direct competitor Virgin Radio, which it had long trailed. Zniber told me he expected the station to continue to outperform its competitor, while the Virgin/Bell Media folks said The Beat’s ratings spike was due to running Christmas music in December and they’d come back down. The next ratings book proved Bell right, but Virgin and The Beat remain neck and neck in the ratings overall.