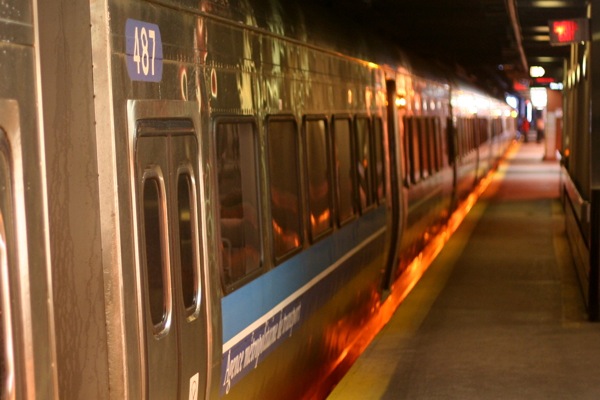 Central Station is no longer off-limits to bicycles

It didn’t get much attention, but the Agence métropolitaine de transport has loosened its restrictions for carrying bicycles aboard commuter trains, opening them up for the first time on all five lines instead of just two.

Previously, bicycles were only allowed outside rush hours (meaning midday or late night on weekdays, and on weekends), only on the Deux-Montagnes and Vaudreuil-Hudson lines, and even then not at all stations (Central Station was the most prominent to not allow bicycles, presumably because of the difficulty of navigating them through staircases and through the underground malls).

They’re also allowed at all stations except three: Hudson (which is moot because it’s only served by rush-hour trains), Île Perrot and Candiac (the latter two probably because of platform issues).

Rush hours, according to the schedules, are:

The Agence métropolitaine de transport has announced that, effective immediately, children under the age of 12 can ride free on commuter trains if they’re accompanied by a paying adult.

Buried in the release is that this only applies to July and August (though The Gazette reports they might consider making it permanent). Children 6-11 who aren’t accompanied by an adult still have to pay their fare (and have to get an Opus card to take advantage of reduced fare).

Children who already have a pass for July can get a refund.

The move not only encourages family outings on public transit (the STM has a similar program for kids under 12 on weekends and holidays), but means a lot of kids won’t have to worry about getting Opus cards (under the pre-Opus system, only those age 13 and up needed student ID) until they start school in the fall.

The STL in Laval has a similar system in place for the summer. 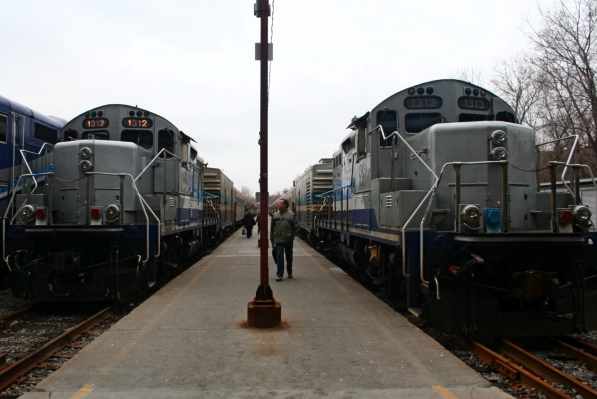 Not only are the AMT's diesel locomotives old and noisy, but they pollute.

The Agence métropolitaine de transport on Tuesday launched a call for tenders on a feasibility study for full electrification of the commuter train network. So far only the Deux-Montagnes line uses electric power (and it uses it exclusively).

CJAD (who I guess read La Presse this morning) quotes the AMT’s Joel Gauthier saying the process would take 15 years to complete. This is a decade faster than he predicted last year in an interview with the Hudson Gazette. The Gazette gets a figure of $300 million from an AMT document submitted in December.

The AMT is acquiring 20 dual-mode (diesel/electric) trains which will serve on its Train de l’Est. That route uses the Mount Royal tunnel, which prohibits diesel locomotion because it is not ventilated and everyone would, you know, die.

Electrifying the other four routes would cut down on pollution, cost and noise, which would no doubt satisfy this family who apparently have just realized that they live next to a century-old railway.

Of course, since AMT doesn’t actually own those tracks (they’re owned by CN and CP), this process certainly still has a way to go before anyone starts putting up wires. 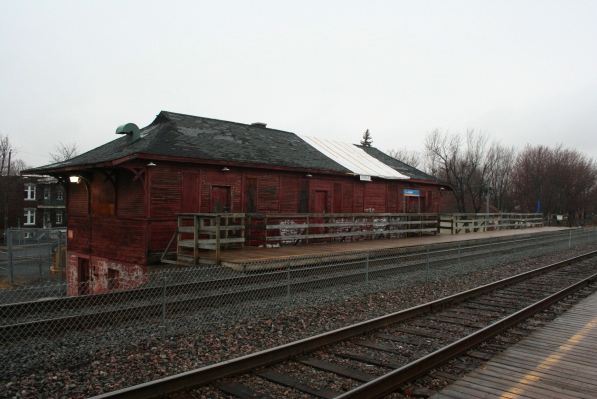 This tiny platform at the LaSalle commuter train station, which has sat unused in favour of its longer twin on the other side, is coming back to life on Monday because of work being done on the track. That means train users will have to figure out which car to be in (much like they have to do on the Saint-Hilaire line because of the length of its platforms).

The AMT today announced that they are going to be compensating users who have been inconvenienced by all the delays caused by train breakdowns and other issues over the past month.

What they’re actually doing is discounting the price of March, April and May TRAM passes for people who take the Deux Montagnes and Dorion/Rigaud lines. (The discounts are steep too, 50% for March, and 25% for the other months – though those are just for Deux Montagnes users.)

And how are they going to determine who uses these lines? Well, the brilliant strategists at the AMT have come up with this:

In other words, they’re handing out coupons to people taking the train the morning of the 18th, and anyone who has the coupon can get the discount (but only if they get their passes at Central Station, Lucien L’Allier station or Vendôme station). There is no way to get the coupon other than using the train during morning rush hour on Feb. 18 (and then you have to repeat the process on March 18 and April 16 for the April and May passes).

UPDATE: The AMT has added Feb. 19 and 20 after complaints from transit users.

I can’t begin to describe how stupid this is. But I’ll take my best shot:

Among the other things contained in the announcement, the AMT is reducing the capacity of trains on the Deux Montagnes line during rush hour, going from 10 cars to eight, so that repairs can be made. Since these cars are already overfilled, they’re setting up special buses to shuttle people between train stations and metro stations near the Deux Montagnes line. The STL is also increasing service to bus #26, which goes between the Ste. Dorothée station and Montmorency metro.

Back from the future

Another measure being taken is reversing schedule changes that were made earlier in the year on the Deux Montagnes line. The morning rush hour schedule, which involved more trains departing from Deux Montagnes, will be reverted to the 2008 schedule starting Feb. 16, since the rolling stock will be unable to handle the increased number of passengers and the increased hours of service.

Finally, the AMT put on its website a page which gives real-time information about train service.

The AMT today announced that it is adding departures on four of its five commuter train lines starting Jan. 12. (The Blainville line is the one left out.)

Details of the schedule changes are below. I’ve omitted schedule shifts of less than 10 minutes.

*UPDATE (Dec. 27): And public protests have resulted in changes to the changes in the Delson line. The morning 7am departure stays, as does the evening 5:15 departure (which was to be moved back to 5:10).

The Gazette’s Linda Gyulai has an article about some railway buffs criticizing Montreal’s plan for commuter rail service, specifically the route of the Train de l’Est (stupidly running from Terrebonne east to Repentigny instead of running west through Laval, using existing tracks, to the de la Concorde metro station) and the apparent abandoning of the plan to use the Doney Spur, which splits from the Deux-Montagnes train line near Highway 13 and runs between Hymus and the 40 west to Stillview.

One important correction to the story: It mentions the building of a Home Depot west of St. John’s Blvd on top of old Doney Spur right-of-way. In fact, it’s east of St. John’s, which mean any rail link to Fairview (which would still have to cross Highway 40 somehow) would have to run through, under or around this new hardware store.

Here’s a bonus for you: A YouTube video of rail buff Avrom Shtern asking Pierrefonds/Roxboro mayor Monique Worth about the Doney Spur in March, and having her give the kind of non-answer that you’d expect to find in a first-chapter exercise of Politics For Dummies.