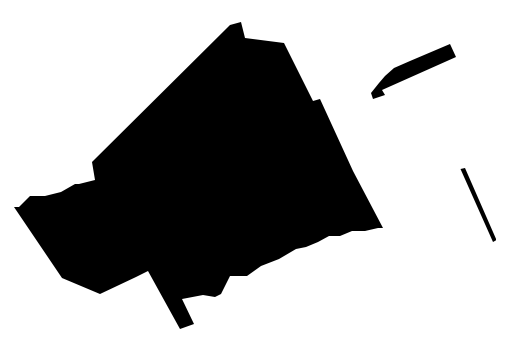 And, for you smarty pants who already know, a tougher follow-up: why is it shaped like this?

UPDATE: This is, of course, a map of the town of Côte Saint-Luc. Those things on the right are exclaves, little pockets of Côte Saint-Luc land sandwiched between Hampstead and Montreal. They’re tiny, but their history is one of controversy, bad blood, political power struggles and, of course, money.

END_OF_DOCUMENT_TOKEN_TO_BE_REPLACED 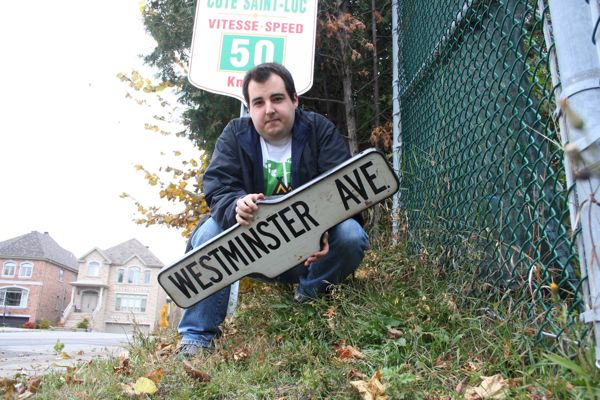 END_OF_DOCUMENT_TOKEN_TO_BE_REPLACED

Note: This post has been updated with full (preliminary) council numbers.

When they voted to break up One Island, One City, 15 municipalities on the island of Montreal, mostly in the West Island, argued that local democracy was one of the big reasons why. Their voices would get overruled in the larger city of Montreal.

Now, of course, these reconstituted municipalities have virtually no say in so-called “agglomeration” matters like public transit. Instead, the city of Montreal calls all the shots.

And as nominations closed Friday for mayor and city council positions, it seems healthy local democracy isn’t on the agenda either. Of the 15, six won’t have a vote for mayor on Nov. 1 because only one person (the incumbent, except in Westmount where it’s a friendly transition to a former mayor) applied for the job. In only one city (Beaconsfield) are there more than two candidates for mayor. And in only three (Beaconsfield, Montréal-Est and Mount Royal) are all council seats contested.

In Baie d’Urfé, they won’t even hold an election because not one position has more than one candidate.

Here are the preliminary numbers from the government:

Meanwhile, in Montreal, six candidates for mayor and every single district has at least three candidates (one from each of the major parties). A total of 400 people are running for 103 positions.

It’s possible that people in these suburbs are just really happy with their current government. In the few places with opposition, like Beaconsfield and Hampstead, there are actual races. But a lack of even token opposition leads to politicians getting lazy, and that inevitably leads to corruption.

Residents of Glencrest Ave. in Côte Saint Luc are outraged at the impending death of all their children.

You might think Côte Saint Luc is a relatively safe, quiet place, being an urban peninsula that isn’t on the way to anywhere. And a where-is-that-again street like Glencrest would be a pretty quiet, low-traffic place in that quiet, low-traffic town.

But you naive baby-killing street-racing maniacs either don’t care about children or you don’t understand the nature of the problem here.

Glencrest is immersed in traffic. People can’t cross the street safely anymore. And yet while the city says it is looking into the issue, the death trap continues to threaten the lives of innocents and residents are prisoners in their own homes, too afraid to step outside.

The evidence is irrefutable: according to a count by a city engineer, Glencrest sees 150 cars … a day.

That’s one car passing through this five-block street every 9.6 minutes.

We must rise up and hold these heartless politicians to account until this street is once again safe for our children.

The City of Côte-Saint-Luc has lots of crazy ideas sometimes. Their latest is to start selling naming rights to municipal-owned properties like swimming pools, buildings and park benches. They aren’t giving a specific list, but have already ruled out entire parks and street names.

They have, however, refused to rule out “sharing” the name of the Samuel Moskovitch arena, named after a former mayor, with a person or company willing to pay a high enough price. That idea didn’t go over well with Moskovitch’s daughter.

Normally I’d be all for getting money from nothing, but I have reservations about this plan for a few reasons:

It sounds like a good idea, but I just don’t see it being any sort of magic bullet for city funding.

Did you know it’s illegal to barbecue on a balcony in Côte-Saint-Luc?

Apparently the law isn’t really enforced, and politicians are looking at ways to change it, according to The Chronicle’s Martin Barry (who uses three different spellings for “barbecue”).

(There’s also the point that fire truck ladders only go so high — which worries me because even propane-less apartments may need them someday — and that tanks are necessarily stored too close to the building’s doors and windows.)

Even if the laws are meant to stop real dangers, can’t we make them a bit more common-sense?

We keep hearing about the Cavendish extension, a long-awaited road link between Ville-Saint-Laurent and Côte-Saint-Luc which will solve a lot of motorist (and public transit) headaches and get some traffic off the oversaturated top of the Decarie Expressway.

But at the other end is a similar connection waiting to happen. This one is much shorter and doesn’t cross any tracks, but residents are complaining of the same problems. 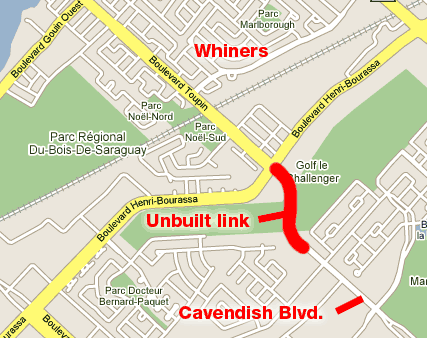 The issue, as the Chronicle explains, is pure suburban greed. Residents in the northern part, a middle-class neighbourhood of western Cartierville with some very affluent areas, are panicking at the thought of cars taking their boulevard. I’m not quite sure where all this traffic is supposed to go. To the west is the Bois de Saraguay, followed by Highway 13, and to the east is Sacré Coeur Hospital followed by Laurentian Blvd. But hey, outrage doesn’t have to be logical, right? Maybe they just don’t like ambulances on their street.

We’ve seen all this before. James Shaw Street in Beaconsfield, where residents oppose a connection to Highway 40. Broughton Road in Montreal-West, where residents ludicrously complain of giant nonexistent trucks barrelling down the twists and turns of the residential streets to reach a far-off Highway 20. Not to mention at least some opponents of the other Cavendish extension.

Their logic is simple. They have no problem using the streets other people’s homes sit on to drive their SUVs to and from work. But if those other people want to use their streets, suddenly it becomes a child safety issue. Their street deserves protection. Their street must remain a dead-end. For the good of their children.

In case you couldn’t tell by my sarcasm, it’s hypocrisy pure and simple. Greedy suburbanites who want the government to legislate a de facto gated community and have the entire world built around them.

Fortunately, the borough sees right through their arguments. Next time you want to live on a street without traffic, make sure you choose one without “Boulevard” in its name.

UPDATE (Sept. 23): A follow-up story from the Courrier’s Catherine Leroux

UPDATE (Sept. 28): A video posted to YouTube shows traffic on the street, but except for some drivers failing to make complete stops at stop signs, nothing particularly incriminating.