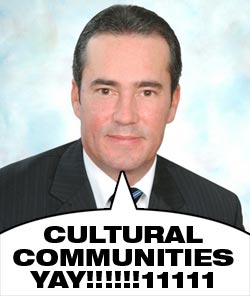 Transcontinental, which owns 61 community weeklies in Quebec (22 of them on the island of Montreal), has decided to reverse its position banning brown people from its papers.

At least, that’s the best I could figure out from this editorial, which is running in all of Transcontinental’s newspapers this week. In it, the general manager of Transcontinental Newspaper Group, Serge Lemieux, has finally clued in to the idea that covering community issues involves covering cultural communities as well. Apparently it took the Bouchard-Taylor Commission into reasonable accommodation for him to figure this out.

The article doesn’t mention exactly what they’re going to do, only that they’ll be “celebrating cultural diversity.” In fact, it goes into more detail about what they’re not going to do, specifically that they won’t be publishing articles in “all the world’s languages” because they find it “undesirable” to do so. Instead, they’ll publish articles “exclusively in French or English (as the case may be)” (French versions of this editorial don’t mention articles in English).

We’ll see what they have in mind.

Speaking of nonsensical Serge Lemieux columns, this one, which in the same breath blames the media for oversensationalizing the issue of reasonable accommodation and says the commission looking into the issue has been a good idea, is also appearing in Transcontinental papers this week.

Ironically, both these articles serve to remind us, in case we didn’t know already, how little local journalism actually comes out of Transcontinental weeklies. A large amount of content is syndicated across many papers, their websites are identical and even most of their logos have the same design elements. All that’s left are some fluff stories about aging grandmothers, rewritten press releases about local events, and a couple of local issue stories written by overworked, underpaid journalists.

But I guess “celebrating cultural communities” will fix that.