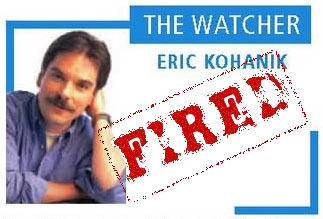 Next time you’re browsing through your digital cable or satellite on-screen guide, give a thought to Eric Kohanik, who until recently provided what little editorial content was left in Canwest’s TV Times. Now even that was deemed too much, according to Bill Brioux.

TV Guide in Canada ceased paper production long ago, and the TV Times that’s distributed in Canwest’s newspapers (including The Gazette) is a shell of its former self (now it’s just a few pages of daytime and prime-time grids for the most popular channels).

This is what you talk about when you’re talking about technology cutting jobs and creating others. Some people with basic analog cable are still attached to their paper-based guides, but more and more are throwing them straight into the recycling bin.

It seems no one watches The Watcher.