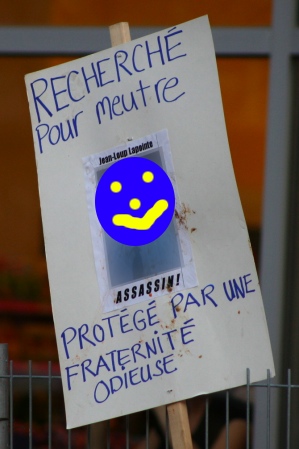 By law, I am now required to obscure this officer's face in this photo taken from last month's police brutality protest

I have sympathy for Montreal police officers Jean-Loup Lapointe and Stéphanie Pilote. On August 10, 2008, they were patrolling in Montreal North when they spotted some young people engaging in a benign but illegal activity. Doing their duty, they proceeded to arrest one of them, who was breaking a bail condition. The situation quickly got out of control, and fearing for their safety (combined perhaps with inadequate training), they fired at their attackers, mortally wounding one of them, a kid named Fredy Villanueva.

Activists saw this as yet another evil police shooting by bloodthirsty cops. The Villanueva family quickly found that police were more interested in protecting their own than getting answers. And Lapointe and Pilote not only have the death of a young boy on their conscience, but live in fear that they might become the target for revenge because of a situation they never asked to become involved in.

The officers in question took what seemed to me to be a rather odd move in response to this fear: they petitioned the court to issue a publication ban on their names and images, arguing that there were credible threats on their lives and leaving their identities public would make them vulnerable to attack. Perhaps even more shocking, the court agreed and banned publication of their photos (but not their names). Newspapers, TV stations and websites had to scramble to remove the photos from any publicly-accessible archives and add warnings that the photos are not to be published until the ban is lifted.

Even I had to act. The photo above was taken during the police brutality protest last month. One of the protesters took a photo of Lapointe and made a wanted poster which was turned into a picket sign. I’ve deleted the photo from my Flickr collection and obscured his face in this post, because otherwise I could have been found guilty of contempt of court.

I knew about the publication ban because I read the newspaper (and I take a keen interest in media issues). But plenty of others aren’t aware of it yet (or perhaps just choose to ignore it) and so there are still plenty of copies of these photos online. A quick Google search will turn them up pretty quickly, and they’re no doubt part of many photo collections taken from the protest.

This just serves to underscore the absurdity of it all. The photos are already out there, and even the long arm of the law won’t be able to wipe out all traces of them. Those who would do harm to these officers could easily find copies.

More importantly, though, this isn’t about protecting the identity of an underage rape victim, or a police informant, or a child involved in a divorce custody hearing. These are police officers. They have to wear their names on their uniforms when they’re on duty for a reason. They have some expectation of privacy in their private lives, but in a professional capacity they don’t have that freedom.

Again, I have sympathy for the fear Lapointe and Pilote feel. But the threats against them are hardly conclusive, and even if you include the Mafia, premeditated attacks on off-duty police officers are extremely rare here.

I disagree with the decision to impose a publication ban in this case. Of course, in the end it doesn’t matter. The public can live without pictures of these officers for a few months, and anyone who really needs a copy probably already has one.

I can just imagine what will happen if that picket sign makes another appearance at a protest and officers try to arrest the person carrying it for breaking a publication ban.

In a video message that was posted on Friday (via No One is Illegal), the family of Fredy Villanueva, who was fatally shot by Montreal police in August, ask why Fredy was killed and why, in the public inquiry that was called to determine the underlying causes of his death, the family (including brother Dany, who was also involved in the altercation) is not being offered the services of a lawyer they’ve been promised.

There are two sides to the shooting of Villanueva: either the police were defending themselves against young men who were reaching for their guns, or police officers panicked and shot at unarmed men when less lethal force was called for. The inquiry probably won’t answer the question, whose truth probably lies somewhere in between.

But why they’re not being given a lawyer, when the police have plenty at their disposal, is a question the government should answer.

A rally is being held Saturday at 1 p.m. at Henri-Bourassa Park (corner of Rolland Blvd. and Pascal St. in Montreal North) in the hope that the two questions will be answered.

Even our coups d’état are lame.

Heck, it wasn’t even the biggest story of the day.

You can tell a story is dominating the news when media outlets are climbing over each other to get any details they can label as “exclusive.” So far The Gazette (proudly) and the Journal/TVA/LCN (multiple times over) have joined in the game, getting their hands on details of the Fredy Villanueva case. La Presse, where are you?

Thank you, No One is Illegal Montreal, for setting the record straight on the shooting of Fredy Villanueva. It wasn’t an accident, nor the actions of a frightened police officer with inadequate training. It was obviously the expression of the “killer cop’s” blood lust for murdering brown people in cold blood.

Oh, and the riot was justified and rioters aren’t criminals.

“No justice, no peace” indeed. (Doesn’t that just mean “wage war until you get what you think you deserve?”)