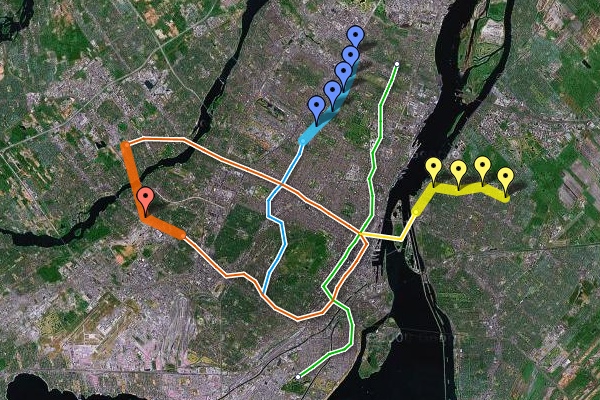 Proposed extensions to Orange, Blue and Yellow lines - one for each city

La Presse had the EXCLUSIF last week that the mayors of Laval, Montreal and Longueuil are about to reach a deal that would see each city get a metro extension. If this idea sounds familiar it’s because it was raised in May (another La Presse EXCLUSIF), at which point I argued that one of those extensions made sense (the blue line) and the other two were much less worth the cost.

I’m not arguing that they’re not worth it necessarily. I like the metro and think it should be expanded where needed, even into areas that are less heavily populated. And I’d certainly rather see the government waste some money on public transit than on an unnecessary highway extension.

But it just seems so convenient that the three most-needed metro extensions work out to one for each of the major cities. 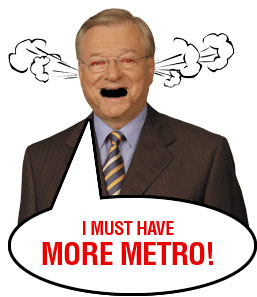 Laval Mayor Gilles Vaillancourt, apparently not happy enough that he leveraged his city’s value as a swing-riding-rich area to get a nearly billion dollars out of the Quebec government for an extension of debatable value, is also demanding that his city get a discount on its use. He says people who take the metro in Laval should pay the STM’s Montreal rate of $68.50 a month, just like the people who use the Longueuil metro station do.

The solution to that dispute, of course, is to just do away with this exception to transit zoning and make people in Longueuil pay more.

(I don’t blame Vaillancourt for wanting more for his city or by making use of his strong negotiating position. There’s a reason he’s been mayor for 20 years now, and I would expect nothing less of him if I was a Laval resident. But there needs to be another tough negotiator on the government site, instead of politicians more than willing to throw away our money in order to win some swing voters and stay in power.)

I like the Laval metro. It’s pretty, it’s clean, it’s got elevators. It’s a fixed link between the two islands, which alleviates some of the congestion on the bridges (or, in a greener light, it will get more people to use public transit because it avoids the bottlenecks on those bridges).

But there’s an argument that’s used by Vaillancourt and others about it that bugs me. You can find it in this Gazette piece:

When the Orange Line was extended from the Henri Bourassa station north into Laval in April of 2007, with Laval getting three stations, projections called for 32,000 daily riders three years later, Vaillancourt said. But it took only nine months to reach 60,000, a level that has remined stable, said the mayor.

I looked back at some AMT literature and newspaper archives from when the extension was being built, and the figure I saw repeatedly wasn’t 32,000, it was 50,000. A letter from the STM’s Isabelle Tremblay on July 26, 2006 has this figure, as do AMT bulletins in 2001 and 2004. I also saw the number in three separate articles (from three separate journalists) in 2001-2002.

I find zero references to the 32,000 figure in news articles before or during metro construction. I also find no reference to the figure in a quick Google search of the AMT and Quebec government websites.

You know, if I was really cynical, I might ask myself if the figure was intentionally (and inconspicuously) lowered from 50,000 to 32,000 to make it look later on like the number of riders had greatly outnumbered expectations, when in fact it was only slightly higher than expected.

What’s important is what figure the government (and the people) had in mind when they approved the extension plan, and everything leads me to believe it was 50,000.

They also, of course, expected it would cost less than $200 million. When you consider that the costs quadrupled ($800 million, still $13,000 for each of those riders), you have to wonder if an underestimate of ridership is really proof that this experiment in suburban underground transit is something we should start up all over again.

I’m not against the metro extensions proposed here, though I would give priority to the blue line extension to Pie IX and the orange line extension to the Bois Franc train station. But if this deal suggests anything, it’s that decisions on these things shouldn’t be left to three big-city mayors hanging out secretly in a back room.