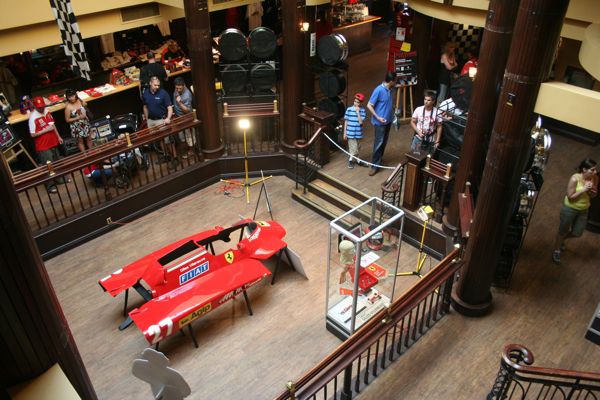 A mini museum (and souvenir shop) to Gilles Villeneuve on Crescent St. during Grand Prix weekend

During the Grand Prix weekend, I noticed that this bar on Crescent St. had been converted into a museum honouring Gilles Villeneuve, the guy from whom the circuit the race takes place on gets its name.

There were photos of Gilles, videos of Gilles, and some original items in a section roped off lest anyone consider actually touching them. They were brought in from the Gilles Villeneuve Museum in Berthierville for the occasion.

Oh, and there was the souvenir stand. In fact, it seemed the entire point of it was to sell memorabilia related to Gilles Villeneuve. But I’ll give them some slack. It’s not like I paid anything to get in.

Anyway, fast-forward a month, and the government is considering levying a fine against the museum because those photos contained advertisements for tobacco products, which were caught by inspectors from the health department (apparently they have people who go around looking for tobacco ads).

The story makes it clear that the government hasn’t decided whether to fine the museum, which obviously doesn’t think it should be fined for showing historic photos to the public. But they haven’t ruled a fine out either.

Let’s hope some common sense prevails soon. After all, it’s not like Marlboro is paying the museum (or Villeneuve) for the ads anymore.