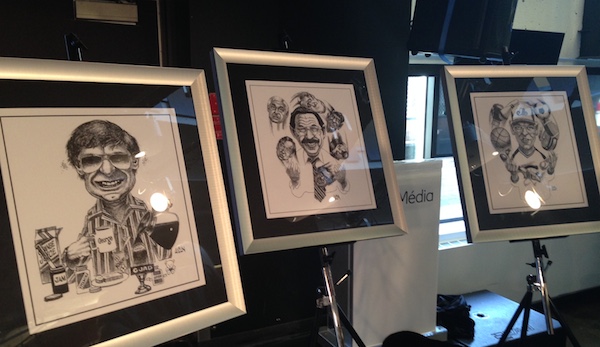 This morning, on its 70th anniversary, CJAD 800 inaugurated what it officially calls a “hall of fame” but program director Chris Bury admitted would probably be more accurately described as a wall of fame. Its first three inductees, unveiled during the Andrew Carter morning show, are of no surprise: George Balcan, Gord Sinclair and Ted Blackman.

The three Montreal broadcasting icons, who all died between 2002 and 2004, were immortalized with caricatures produced by cartoonist Terry Mosher (Aislin), actually taken from cartoons he had already drawn of the three. “We had a few versions” for each of the three, Bury explained, and they decided to go that way rather than use old publicity photos, many of which were not in great condition, were poorly lit or seemed too serious.

The framed cartoons will be hung in the CJAD studio, where people who work at the station “can get a sense of the history of the radio station,” Bury said.

More CJAD personalities will join these three over the coming years. Bury said the plan is to induct one every six months or so until the 75th anniversary in 2020. “Nothing is set in stone” about who else will be inducted, though there are some obvious picks. Simple math would suggest about a dozen inductees in all, though that too hasn’t been set in stone.

“I don’t know how many other stations could do this,” Bury said after the ceremony.