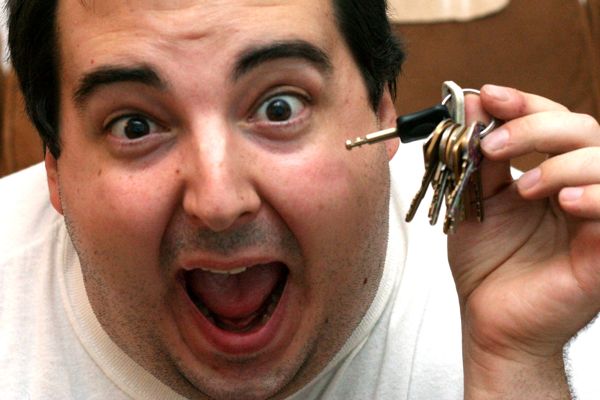 Here’s me holding my keys. Among them is my Bixi key. It’s scuffed up, and is now completely useless. And I couldn’t be happier.

As the CRTC was in the middle of an odd three-hour break on Monday, I headed out to grab some food and head to CBC for a radio interview. I took a Bixi to a Belle Province on Ste-Catherine Street, and had a quick bite. When I got out, I went back to the Bixi stand, but I couldn’t find my keys. Not in the usual pocket, not in the other pocket. Nowhere. They weren’t back at the resto. But I had to have had them when I got the Bixi at the Place d’Armes metro station.

My conclusion: I must have left the keys in the Bixi stand at Place d’Armes.

The Bixi key isn’t a problem to replace. Call them, they deactivate the old one and charge you $5 to send a new one by mail. The other keys are more annoying to replace. One of them I’m not even sure there’s a double for, plus I would need someone to let me into my apartment.

A hurried cab ride (I never take cabs) back to Place d’Armes confirmed the keys were no longer there. I went to the interview, walked back to the Palais des congrès and continued my day, stressing about how I would get into my home that night and how I would replace all those keys.

I got a phone call, which I ignored because I was in the middle of a hearing. Then I saw a tweet a minute later: Someone had found my keys, called Bixi and left their number.

The young man, who lives in the Plateau, was happy to return my precious bits of metal, and gave me his address to pick them up. He hesitated when I offered a small reward, to the point where I literally had to shove it in his face. I asked him to do something enjoyable with it, and after trying again to refuse he said he’d put it toward his trip to Quebec City.

Unlike a wallet or a cellphone, those keys are pretty useless to anyone who’s not me. It’s not like it’s easy to figure out what they open.

Nevertheless, my faith in humanity is heightened today. And I’m left with one less thing to stress about. (Which is okay, because there are plenty more things.)

Big thanks to the man who found my keys, and to Bixi, which not only processed my request to have the key deactivated in a matter of seconds, but went above and beyond in reuniting me with my keys later.