Aside from a weekly top 20 countdown show, and the rebranding of the Much Music Video Awards, most of the effects so far aren’t on the air but rather on digital media, and affect how you access radio stations through the Internet.

Many people were no doubt surprised when they visited their local radio station’s website today to find out it had been replaced by a page on iheartradio.ca.

Like a lot of website redesigns these days, this change favours style over substance. It’s very simplified, with only four or five pages in the navigation menu: News, Shows, Contests, Audio/Video, and Events. (There are also smaller links to contact pages, a list of recently played songs, and social media accounts.)

Other stuff has fallen by the wayside. One person already emailed me to note that full-show podcasts that used to be accessible on the old websites are nowhere to be found now. (The audio/video section has clips.) Blogs also appear to have little place on these websites.

Putting everything on iheartradio.ca no doubt makes administration easier for Bell Media, but it also strips away each station’s individual branding. It harkens back to the “portal” mentality of the late 1990s, when media outlets owned by large corporations were made into sections of larger websites, like canada.com, canoe.ca and sympatico.ca.

TSN Radio stations are an exception to this, thought they didn’t have their own websites to begin with, and they also have pages on iHeartRadio.

For most stations, particularly music stations, the websites are adequate. The listen live function is front and centre, and schedules and other basic information isn’t hard to find. And it seems as though there is some ability to customize the websites for each station’s needs.

But looking at the bottom of the page, you see links whose usefulness can be questionable. Click on “On-Air Hosts”, for example, and you get this list, of all 892 on-air personalities at all Bell Media radio stations throughout the country, in an unclear order. (It appears to be alphabetically by first name, but that breaks down once you hit Page 2.)

It might sound like nitpicking, but there’s an assumption underlying this design, that all of Bell Media’s 100+ radio stations are interchangeable, and Canadians will be just as interested in a small-town station across the country as their local station.

And that flies in the face of what the industry has been telling us for years now is the power of traditional radio: the importance of being local.

iHeartRadio mobile app: Like TuneIn, but with more bugs and limited to stations owned by Bell

This mentality is made crystal clear by the iHeartRadio mobile app, which is available on Android and iOS devices.

The app is very bare-bones considering Bell has been hyping it for so long now. It asks you to pick styles of music you’re interested in, and then suggests stations (either Bell Media traditional radio stations or themed iHeartRadio audio streams). You can set up an account and save your favourites, but registration isn’t required to use the app.

There’s a “Local Radio” tab that uses the phone’s GPS function to find radio stations in your area. 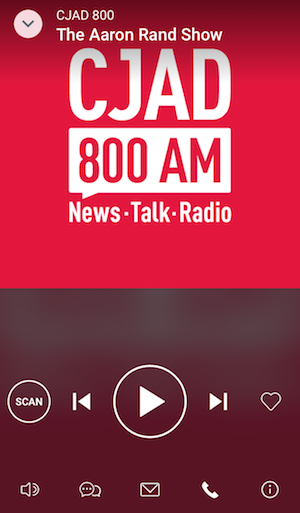 Once you’ve picked a station to listen to, there are options to play, favourite, and buttons you can press that will let you call, email or text message the station — assuming the app has the station’s phone number, text message line and email address plugged in, and many stations don’t have that.

The other buttons are previous, next and scan. Those buttons assume that you’ll be spending time switching radio stations, and not just between local stations but between Bell Media stations across the country, regardless of region, format or language.

Occasionally, every handful of skips or so, there’s a 15 or 30-second unskippable video ad. There are also small banner ads that appear in the app.

The app looks nice. Many stations provide titles of songs currently playing, and the app loads album art where it has that information. The name of the current show is also displayed.

And there are still quite a few bugs. Some stations don’t load. That “local stations” list isn’t perfect — TSN Radio 690 isn’t listed for people in Montreal, even though it’s available in the app. And sometimes the app just quits for no reason.

And all this to use an app that’s based on skipping between stations but doesn’t include any stations not owned by Bell Media.

Most of Canada’s other major radio broadcasters, including Rogers, Corus, Cogeco, Newcap, Pattison and RNC Media, have signed on to the UK-based RadioPlayer app. By working together, these companies will make it easier for Canadians to access radio streams and skip between them. But without Bell Media on board (or CBC, or non-profit broadcasters, or some smaller players like Evanov), it too will be incomplete.

The RadioPlayer app isn’t available yet. The announcement was made just to get ahead of iHeartRadio. They haven’t even set a launch date yet.

Which brings me to TuneIn.

The 15-year-old radio streaming website and app is the gold standard for this sort of thing. The “Local Radio” page lists 43 stations in and around Montreal, including stations from Bell Media, its competitors, campus radio stations, CBC, community stations, and cross-border stations. It also includes some online-only local stations. (The list isn’t perfect, and includes some far-away stations, but it’s much more comprehensive than any other.)

It also classifies stations by genre, lets you favourite stations, and uses schedule information to tell you what show you’re listening to.

Because it’s not run in partnership with the stations, there’s no current song information, nor a list of recently played songs or contact information.

But if your goal is an app that lets you stream your favourite radio stations in one app, then this is what you want.

If you want an app that lets you skip between radio stations from towns you didn’t know existed, and ensures that you never hear a radio station that isn’t owned by Bell Media, then by all means iHeartRadio is the app for you.