As part of the upcoming municipal elections all across Quebec on Nov. 1, the Directeur général des élections du Québec decided to pay an advertising agency to come up with a campaign to get people to vote.

Cossette, the agency in question, came up with this parody of a news/opinion TV talk show with an over-the-top anchor, which it released on YouTube (and fed to Dominic Arpin) hoping for it to go viral.

The video is well done and pretty funny, and most who see it will immediately think of former TQS anchor Jean-Luc Mongrain, who now has a show on all-news network LCN. Probably for that reason more than any other, it went crazy viral, with over 30,000 views in under four days.

The reaction from Mongrain and LCN’s owner TVA when they saw the video was surprising: they’re furious. Mongrain took the ad’s creator to task on his show for not letting him know ahead of time about the parody. TVA sent a letter to the DGEQ demanding that the video be taken down because it sullies his reputation.

Here’s the thing: Nowhere in the video are the words “LCN” or “Mongrain”. The show is called “Chouinard en direct” for the fictional network “RDN” (a mix of “RDI” and “LCN”). The set isn’t the same, the graphics aren’t the same, and the host doesn’t look like Mongrain. The only thing that ties the video to Mongrain is the theatrical way the actor acts and gestures.

TVA’s complaint is that the video might negatively affect Mongrain’s reputation. Setting aside for a second whether his existing reputation could be dirtied by portraying him as an over-the-top drama queen, there’s an inherent contradiction in this logic. Either this video is aimed directly at Mongrain because his style is mimiced so exactly, or his reputation is taking a hit because they’re portraying him as something he isn’t.

I can see TVA’s point that this is a government-funded ad for an election, and so should take great pains to be as non-partisan as possible. But despite TVA’s objections, I can’t see how this could put Mongrain in a “delicate situation” in the run-up to the election.

Judging from the comments on Mongrain’s blog, it would seem he’s not getting that much support playing the victim here.

Jean-Luc, this video isn’t an over-the-top caricature of a crazy TV news man. You are. Lighten up and learn to laugh at yourself.

UPDATE: The DGEQ has refused TVA’s request to take the video down and cancel the ad campaign.

(Once again, my real job kept me from my self-appointed Journal-monitoring rounds, this time for a full week. Here’s what we missed) 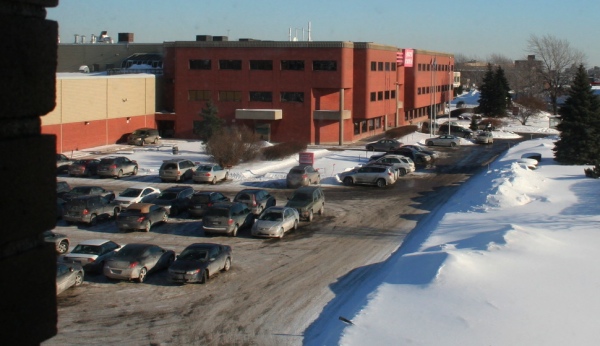 A view of the Journal de Montréal building, from the offices of the STIJM

The big news, sadly, is no news. One month into the Journal de Montréal lockout, there are no negotiations scheduled, no sign that any end is near.

But there’s plenty of other stuff going on. Here’s what I’ve found:

Habs stories top all others

Shortly before that big La Presse thing, when everyone was still talking about Alex Kovalev and how much the Habs sucked, Rue Frontenac posted an article from Marc de Foy about what Kovy supposedly said to his peeps back home, namely blaming other players for the team’s misfortune.

Pretty standard fare for the Journal, because it sells papers to bring up stuff like this that has about a half-and-half chance of being true. De Foy was interviewed on CKAC, reports circulated on RDS and other Habs-crazy places, and that was enough to bring down RueFrontenac.com for a few hours on Wednesday evening.

That was enough to worry some hard-core followers. But don’t worry, the site is still there.

Mongrain is the new Martineau

You’ll recall Richard Martineau already has an LCN show, a Journal column, and a Canoë blog, but Mongrain still thinks his will be new somehow (I think he means new to him).

Canoe has a video interview with Mongrain about his new multiplatform initiative.

I really can’t not post this video mashup of Jean-Luc Mongrain and Christian Bale (via Lagacé):

And, for the sake of fairness, this parody of Céline Galipeau and Radio-Canada’s Téléjournal (via Arpin):

Jean-Luc Mongrain, the only person left at TQS who we can name off the tops of our heads, is calling it quits. Journal de Montréal’s EXCLUSIVE interview generated so much reaction, a whopping four comments, that it’s clear to see how much Mongrain’s work has touched Quebec.

As some consider potential replacements, Patrick Lagacé offers his favourite Mongrain memory, which certainly beats mine.

A memo to Jean-Luc Mongrain:

Acting like Bill O’Reilly doesn’t make you a better interviewer. When you invite a leader of the student protest movement on your show and yell at him like a madman, it doesn’t make people agree with your position more. In fact, people already agree with your position that protesters provoke police and that the tuition hikes are modest and don’t necessitate this kind of response.

So why are you yelling like a baby who thinks nobody is listening to him? You invited the guy on your show to speak his mind. At least let him speak.

UPDATE (Nov. 19): Mongrain’s contract expires next spring, and he doesn’t seem worried about his future.