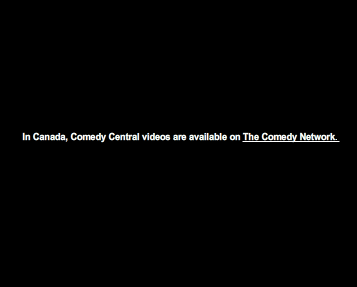 For those who haven’t seen it yet, the full interview between Jon Stewart and CNBC Mad Money host Jim Cramer has been posted to the Comedy Network website. The Daily Show invites us to go to their thedailyshow.com website, but because of a stupid deal between Comedy Central and CTV’s Comedy Network, any time someone in the U.S. links to a Comedy Central clip, you’re shown the message above and are forced to find the video – from scratch – on the Comedy Network website (assuming the clip even exists on it).

I’ll spare you analysis of the interview, since apparently there is no shortage of journalists who have nothing better to do than talk about what was on television the night before. Unfortunately, while plenty of pundits are liberally quoting the interview, judging Cramer’s body language or talking about how much of a hit it is on YouTube, there isn’t much talk about what this means for CNBC. The inevitable comparisons to Stewart’s appearance on CNN’s Crossfire in 2004 have already been made. Since Crossfire was cancelled months after Stewart’s appearance (and CNN has since moved more toward polite analysis from partisan hacks instead of shouting debate), the reasonable question to ask is whether CNBC will also undergo a radical shift as a result of this public depantsing.

Just pulling this out of my ass here, but I’m guessing there will be some changes to CNBC’s tone, with more confrontational interviews with corporate CEOs, more skepticism of Wall Street companies and get-rich-quick schemes. (Of course, these will be more the result of the market collapse than Stewart’s prodding.) But Mad Money isn’t going anywhere. Jim Cramer isn’t suddenly going to drop his sound effects and start doing more reasoned analysis. And anyone who thinks that it will be doing a lot more serious investigative business reporting in the long term is kidding themselves. It’s hard, and there’s no money in it.

And if any cable network understands the profits that can come from getting high ratings as cheaply as possible, it’s CNBC.

UPDATE: Bill Brioux has the Canadian ratings numbers for the show on The Comedy Network and CTV.

This is a joke, right? Colbert’s just going to ad-lib his whole show?

I can understand Leno and Letterman putting on a bare-bones show without monologues in order to save the jobs of non-writing tradespeople who work for them. But Stewart and Colbert are all about the writers. What the heck are they going to do?