A bit of union propaganda from the locked-out and on-strike workers at the Journal de Québec, who have been out of work for a year, and are still producing a daily newspaper off raised money while their old one deteriorates. Today, they’re encouraging people to boycott the Journal de Québec to protest the continued lockout.

UPDATE: Today’s special issue (PDF) is 56 pages, and filled with ads. Meanwhile, Steve Proulx argues that while he isn’t taking a position either way, it’s worth noting that the Journal’s current contract gives some rather extreme benefits to workers: high salaries, four-day weeks, paid days off on their birthdays, etc.

As the calendar turns to a full year since Journal de Québec staff were locked out of their newspaper and responded by launching their own, spokesperson Denis Bolduc appears on Gauthier to explain his case, which has garnered so much national media attention that the group put out an English-language edition explaining the situation (PDF).

La Presse: According to Michel Leblanc, an agreement in principle has been reached between the union and employer, which will remove the disparity between newspaper journalists and online journalists, and would bring back the blogs that were suspended in September, including that of Tristan Péloquin (remember him?). No word yet from official sources. Patrick Lagacé confirms, saying there will be a general assembly on March 19 for union members to approve the deal.

Le Journal de Montréal: Steve Proulx quotes Le Trente that a strike (or lockout?) is on the horizon, because the manager-to-employee ratio is high. JdM employees are paid generously (so much so that my colleagues were shocked to hear pay rates for equivalent jobs there), and Quebecor might look toward building on the “success” of the Journal de Québec. (See some analysis by Julien Brault) (UPDATE March 5: Proulx has an update based on statements from some anonymous sources within the Journal)

Le Journal de Québec: Tomorrow, the 10-month-old lockout/strike will set a new record for a labour dispute at a French-language Canadian newspaper, eclipsing the previous record set by Le Soleil in 1977. (The irony, of course, is that the Journal itself owes much of its early success to that very dispute.) Mario Asselin is starting to lose his zeal for the fight.

The Gazette: Also management-heavy in preparation for new contract negotiations this spring, the paper has decided to lay off 46 employees in its Reader Sales and Service department, transferring call centre operations to a centralized centre in Winnipeg as of May 30. The union is fighting the move, calling it a violation of a contract clause against outsourcing. (UPDATE March 5: The layoffs have been put on hold while arbitrators sort out the union issue.)

Locked-out and striking workers at the Journal de Québec have asked for an arbitrator to finally help put an end to the conflict that’s been going on since April.

The seemingly unsustainable situation, where the paper has been relying on quasi-legal Canoë, Journal de Montréal, wire service and management workers to put out the paper while the unionized workers have been publishing a competing free paper five days a week, has gone on so long that union members are being offered subscriptions to the Journal, and MédiaMatin has started a classified section: 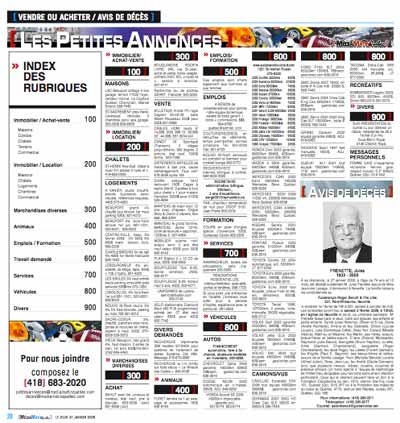 The Journal is clearly not ready to back down, and as long as the union gets support from its solidarity-bretheren (the latest is the Réseau de transport de Longueuil) as well as overwhelming moral support from the public, they’re not about to fold up shop either.

Le Devoir looks at six big issues the media will have to tackle in 2008:

Do you have any answers?

Via Martine, the WGA, the American writers union which is currently holding us hostage by denying us House-isms on strike for the rights to more than mere pennies from DVD sales and all of nothing from online publishing of TV shows and movies, isn’t lying down or holding useless marches with picket signs. They’re creating media to rally support for their cause.

In essence, it’s a tactic we’ve seen before but on a much larger scale. When CBC employees were locked out in 2005, they started producing blogs and podcasts to keep communication going. After it was over, the blogger for CBC Unlocked, Tod Maffin, was given the job of running Inside the CBC, a decidedly uncorporate, uncensored blog about the inner life of the Mother Corp., with its blessing.

Locked-out journalists at the Journal de Québec are still, since April, putting out a competing daily newspaper as part of their pressure tactics. The move has rallied support among other unions (who have helped them financially) politicians and newsmakers (who refuse to deal with Canoe reporters, a fly-by-night “wire services” and other scabs) and readers (who have cancelled subscriptions and are picking up the competing paper).

With Hollywood, the tactic that’s getting the most play is online video (ironic since the dispute is over how little they get paid for online video). Writers for popular shows like The Office, the Daily Show and the Colbert Report have been cracking jokes on YouTube, and the actors are coming out to support them. Some like McDreamy and co. talk calmly about the issues, others like Sarah Silverman make the funny, and then there’s Sandra Oh.

The latest campaign, called “Speechless“, involves short black-and-white clips of actors in a world without scriptwriters. Most of them are of the actor-stands-blank-faced-and-says-nothing variety. Others are pretty funny. There’s a new one every day.

Some of my favourites below:

END_OF_DOCUMENT_TOKEN_TO_BE_REPLACED 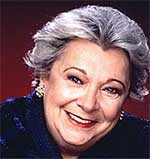 Payette quit the Journal in April because her columns were being republished in the Journal de Québec, whose editorial employees had just been locked out. She refused to cross picket lines, and declared that her articles would no longer appear there.

Payette’s leftist leanings, combined with her sovereignist politics as a former PQ cabinet minister make her a good fit for Le Devoir. Let’s hope she takes a few readers with her.

Her first column, which discusses how the Yvettes destroyed her political career and how she never thought she’d write for Le Devoir, appeared this morning.

Québec solidaire kicked out a Canoe reporter from a Quebec City meeting on Sunday. The reason was simple: the reporter was replacing locked-out Journal de Québec workers, and because QS is all crazy-leftist and such, they’re not about to accept a scab.

But is that an acceptable reason for kicking a journalist out of an open political meeting? Where do you draw the line between legitimate interference and scary Stephen Harper-style cherrypicking of reporters?

A new financial report from Quebecor Media thumbs its nose at striking and locked-out Journal de Québec workers, saying that profits have exploded since the work stoppage in April.

And while the Journal is saving a lot of money in salaries, it’s hard to say how sustainable it is to run a newspaper without journalists. (Though no doubt Quebecor would love to find a way to make it work.)

LCN has a report on the Journal de Québec strike/lockout, which is now 6 months old. Naturally, the union-says-this/employer-says-that news package doesn’t disclose the fact that TVA/LCN and the Journal are owned by the same company.

Meanwhile, workers on the picket lines were warmly received by union leaders across the country, and their strike paper MédiaMatinQuébec is still going strong with the help of enthusiastic advertising from local businesses.

UPDATE (Oct. 26): I totally missed this feature by The Gazette’s David Johnston on the lockout/strike, as well as an accompanying analysis piece on crossover reporting. Both concentrate on journalists being asked to take photos or video in addition to writing articles, which saves money but produces crappy quality of both.

Quebecor Media is getting a slap on the wrist from a committee setup to oversee the separation of its newsrooms. They found three instances where the Journal de Québec took photos from TVA, which violates the promise Quebecor made to the CRTC to keep their newsrooms completely separate.

I think the cat’s out of the bag when it comes to merging newsrooms. Quebecor has already combined its online properties into the monster Canoe. They’ll just keep finding ways to consolidate their assets without pissing off the CRTC too much.

Another thing that’s interesting about this situation is that two of the three instances happened while the Journal de Québec was in a labour disruption (which is still going on, by the way). The union might have something to say about that.

On the occasion of MédiaMatinQuébec’s 100th edition, blogger Tetoine is encouraging bloggers to show support for the Journal de Québec employees’ alternative paper.

Since the workers at the Journal were locked out (or began striking in sympathy for locked-out workers) in April, what might seem like a simple labour disruption has truly taken on a life of its own. The workers, who wanted anything but picketing outside the offices of the paper where no one would see them, started their own paper, giving it away free.

In the months since, the Journal has been trying to use the courts to shut MédiaMatinQuébec down, claiming that it’s disloyal of striking employees to start their own paper. Quebecor lost that battle last week.

To keep the Journal running, management has been running wire copy, unedited press releases and stories from the Journal de Montréal (despite objections from the journalists writing them), and producing the paper with the help of 14 extra managers they suddenly decided to hire just before the contract expired last year. (The employees won a case last month getting four employees declared “scabs”) To show how seriously they take this matter, they also cancelled employees’ subscriptions to the Journal and banned MédiaMatinQuébec from what few stores they control.

The workers, meanwhile, have been busy. Producing a free paper every day hasn’t been easy or cheap, but they’ve been getting a lot of financial and moral support from labour unions, politicians (PQ, NDP) local businesses, fellow journalists, and of course the Quebec City reading public. They’ve handed out millions of copies, and launched a website at mediamatinquebec.com. They’ve even started stealing away advertisers.

But when it comes down to it, the only real winner in all this is Le Soleil, which is taking advantage of the strike to position itself as the Quebec City paper, and starting to recoup some of the readership it lost to the Journal after Le Soleil’s workers went on strike 10 years ago.

I don’t necessarily blindly support the workers in this case, and I certainly don’t support the Journal. But it’s hard not to be impressed with what’s been done and how they’re still going five months later. Stoppages at transit authorities and cemeteries stopped only after threats from the government. Since the populace doesn’t care much about a paper not producing original journalism, this stalemate looks like it could go on forever.

So long as organized labour keeps funding MédiaMatinQuébec and puts food on its employees’ tables.

For more details, consult this timeline of events.

The Journal de Québec have won a case before the Commission des relations du travail du Québec, which ruled today that four employees of the newspaper were illegally working as scabs during the labour conflict which has dragged on since April. The Journal was criticized by its union for a sudden increase in the number of managers just before the lockout began.

For more information on the labour conflict, you can go to MediaMatinQuebec, the website setup by the locked-out workers.

Just learned that MédiaMatinQuébec, the free paper being run by locked-out workers at the Journal de Québec, has launched its website at MediaMatinQuebec.com.

And it’s already more impressive than any other Quebec media website. It’s fast, lean and easy-to-navigate.

You know, the more this conflict goes on, the more I think these workers should forget about the Journal and turn MédiaMatin into a business. Sell some more ads, rent a small office building and this could really be something.