When Global TV decided to have late-night and weekend newscasts for its less popular markets anchored out of Toronto, it described it as an innovation, a way to increase local news instead of reducing it.

The day before it began in Montreal, it was described as something that will “allow for more local news gathering in the field.”

While it’s still early to judge something so new, after watching a few episodes of the newscast, I think I can at least evaluate Global’s promise of “more local news gathering”, at least as far as it concerns those newscasts:

The amount of local news gathering is about the same on weekends. What’s different is that it’s now presented by an anchor who has at best a vague understanding of the local market. Not that one is necessary for most of the show because after the first 10 minutes or so it stops reporting on local news.

Let’s break down the newscasts to explain this. 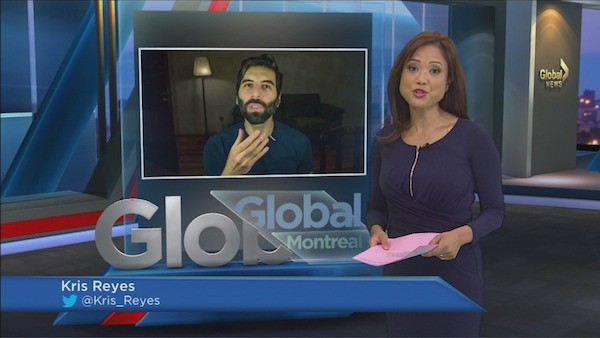 The show starts with the usual teasers and an announcer saying “From the Global News Centre, the Evening News with Kris Reyes.”

Global’s use of green-screen virtual sets means Global can make Reyes appear to be anywhere just by inserting the word “Montreal” behind her in a computer. 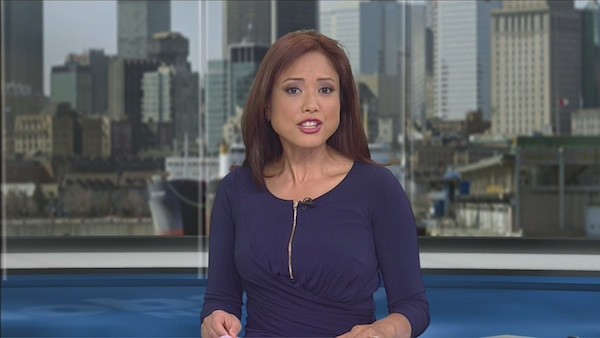 The same goes for the Montreal skyline inserted behind her at the desk when she presents more local news. It almost looks like she’s in the Global Montreal studio. 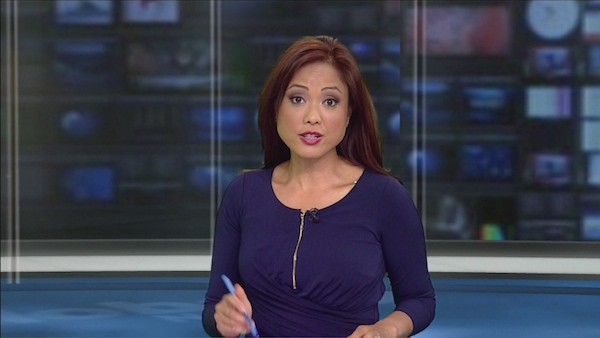 Coming back from the first commercial break, the background changes. Suddenly she’s in front of a control room that has lots of screens but no people. I don’t think it’s a coincidence that this corresponds to the part of the local newscast devoid of local news. Putting Reyes in a generic could-be-anywhere set allows Global to produce part of a newscast filled with national and international news and copy-paste it into local newscasts across the country.

This is similar to what they’ve done with the Morning News, which goes back and forth between local and national segments. 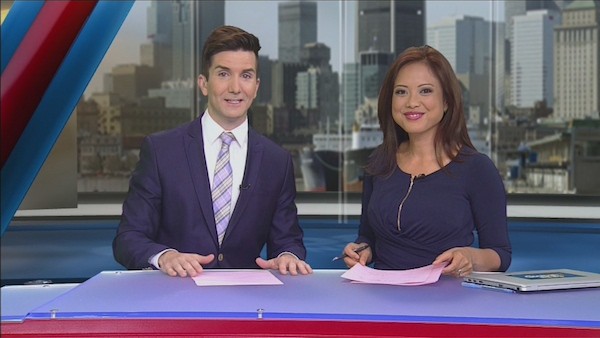 Judging by the radar maps used, the weather segments appear to be recorded 1-2 hours before the newscast. That’s not much worse than before — because the weatherman was shared with Global Toronto, they were prerecorded before this change too. And weather forecasts don’t change that much in an hour (says the guy whose newspaper includes weather forecasts which, by the time anyone reads them, are at least 12 hours old). 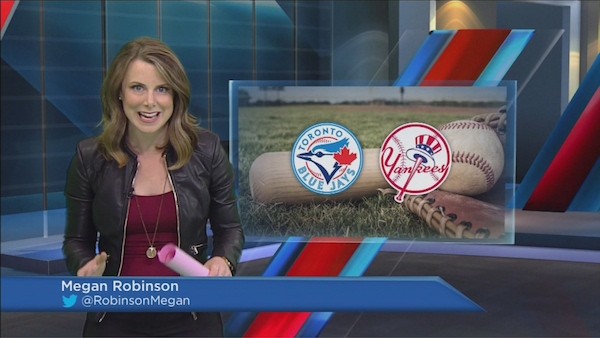 Back to Generic Set, and Reyes introduces Megan Robinson doing the sports roundup. Previously, Global Montreal’s local newscasts didn’t have sports segments because they didn’t have sportscasters. (They’d do quick highlights of local games, but that’s about it.)

Of course, the Blue Jays are the top story. Even though Michael Sam had made history the previous night in an Alouettes game, neither Sam nor the game made the Aug. 8 sports roundup. But you’ll be happy to know that they got in a roundup of the Shaw Charity Classic golf tournament in Calgary. 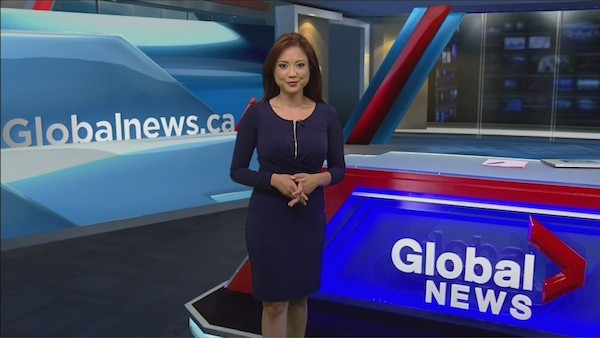 After more time-filling news stories from elsewhere, Reyes does a goodbye that seems to be carefully generic so it can be copy-pasted anywhere. Heck, they could just rerun the same clip at the end of every newscast every day. She might not be wearing the same dress next time, but if viewers haven’t spotted all the other trickery going on, they probably won’t notice that. 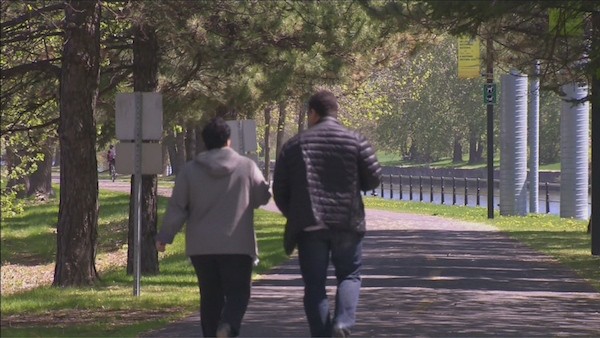 Finally, a 30-second collection of cityscape videos that appear to have been taken in the spring because people are wearing sweaters and winter jackets, we’re off to Global National.

The first newscast had two packaged reports from local reporters. I found this suspicious because normally there aren’t that many local resources available on weekends. Sure enough, the next weekend it was down to one local reporter.

Even with those two local reporters, the total amount of local news represented only six minutes of the local newscast. If you add the weather segments, which are also done out of Toronto, it goes up to 10.5 minutes. Add the 30-second cityscape montage to close the newscast (looks like the timing was off for the first show), and it’s 11 minutes, out of a 22-minute newscast.

Production-wise, the newscast went smoothly (aside from being a bit short). There were no technical errors or awkward silences or glitches that I could see. Having the newscast anchored out of Toronto didn’t seem to be that noticeable, except for the changing backdrops and the awkward pronunciations of French names and the use of terms like “Honoré Mercier” (for the Mercier Bridge) that are dead giveaways that someone isn’t from around here.

For the first late newscast, it was much of the same, except that the sports segment began with a roundup of that night’s Montreal Impact game. A 22-second roundup. Followed by a minute and 20 seconds on the day’s Toronto Blue Jays game.

Day 2, the evening news started four minutes late because of golf, but still finished on time. The evening news sports segment consisted entirely of highlights of the Blue Jays game. At 11pm, it also included PGA golf and the Shaw tournament, and ran through a list of Quebec athletes who won medals at the Parapan Am Games in Toronto.

The second weekend is, I’m assuming, more representative of what we should expect from this newscast. I watched the Aug. 15 6pm newscast with a stopwatch and broke it down. Those elements in bold are local stories:

Added up, this amounts to five minutes and eight seconds of local news. Add in the four minutes and 17 seconds of local weather, and you have 9:25 total in that half hour. Another 8:15 were commercials, 2:36 consisted of promos and the goodbye, 2:59 on sports, and the other 6:45 were national and international news stories. Broken down percentage-wise:

When there’s more national and international news than local news, you wonder if it can really be called a local newscast.

Saturday’s late newscast was about the same, though it included a story about Michael Sam leaving football again. The story, whose original reporting consisted of a Skype interview, was reported by Jennifer Tryon out of Toronto.

If only all local news could be reported that way.

This outsourcing of local news is just the latest step in a long process of saving money by centralizing work for small local stations. Even before the change, evening and late-night newscasts were produced in another city, with a weather presenter in Toronto and only local journalists and the local anchor in Montreal. And even before the change, much of these half-hour local newscasts, especially on weekends, were filled with reports from other Global markets or foreign news services.

And though the union has protested the whole way, the last time the Canadian Radio-television and Telecommunications Commission looked at it, it passed on the opportunity to conclude that Global was no longer producing local programming.

Does the location of the anchor make much of a difference here? We might see the commission be forced to re-evaluate the situation. But it’s hard not to think the boat has already sailed here.

On one hand, Shaw Media is a private company, so it can do what it wants. If it wants to treat local news this way, it can. If it believes that copy-pasting prerecorded segments in Toronto results in a better product than a live local newscast made in Montreal, it can do that.

But on the other hand, it’s trying to sell us on the idea that it’s adding local newsgathering resources when it’s not, and more importantly it’s pretending to the CRTC that this constitutes 30 minutes of local programming when less than a third of it is in any way local.

I understand Shaw’s motivation. The late-night and weekend newscasts have poor ratings. (There wasn’t exactly any protest online when this change happened, because so few people were watching anyway.) And it is adding some resources, including a soon-to-launch noon local newscast.

But I don’t like being deceived, especially by journalists. And so much of this new system seems designed to deceive us into thinking that this is a local newscast when at best it’s half that. If you’re going to anchor a Montreal newscast out of Toronto, just be straight with us instead of using TV magic to try to hide it.

I get that local news doesn’t pay. But local programming is what broadcasters are expected to provide in exchange for the privileges that come with having a television station. If Global doesn’t want to do local news here, maybe it should consider some other form of local programming, or just offer the airtime to community groups that can offer something that truly reflects Montreal.

Because having a Toronto anchor introduce a story from Calgary and calling it local Montreal news is an insult to our intelligence.

The Toronto-produced Evening News and News Final air at 6pm and 11pm, respectively, on Saturdays and Sundays. The weeknight News Final will be similarly moved to Toronto starting in September. Global News at Noon starts Aug. 27.

Today was the first episode of News at Noon, a new half-hour local newscast that is produced out of Montreal. Jamie Orchard is the permanent host, but Camille Ross took over those duties today while staff is shuffled because of vacations. 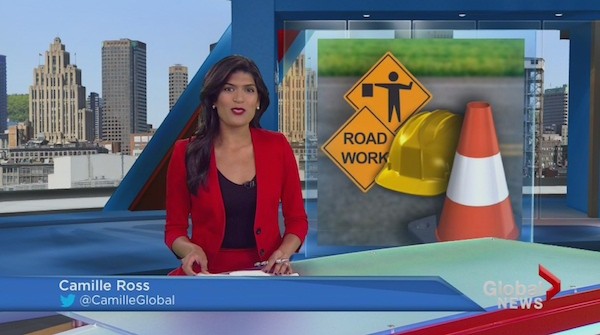 The show had about what you’d expect from a noon newscast: two live hits from reporters in the field (morning reporter Kelly Greig and evening reporter Tim Sargeant), a packaged report from the previous night, and some briefs.

I won’t do a detailed breakdown because I suspect the first show might not be representative of what we should expect on a regular basis. I’ll wait until a future date to give this a more thorough evaluation. But it followed a formula similar to the weekend newscasts, with the first half of it local news and weather and the second half mainly national news and packages and video from other Global stations, particularly in western Canada.

Two of the briefs dated to Saturday, which is a bit of a stretch for a Monday noon newscast. Worse, Global failed to send a camera to the Péladeau-Snyder wedding in Quebec City, so it relied on TVA footage, photos posted to social media and file video of the couple attending Jacques Parizeau’s funeral instead.

Despite all this, it went better than I expected. The production was smooth and it felt more live and local than the stuff I’d been watching on the weekend. We’ll see if they can keep that up. 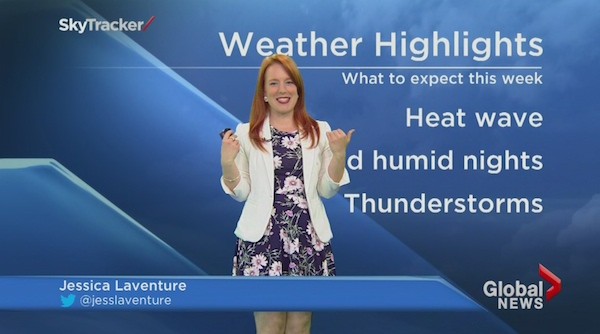 I don’t know what hope this newscast can have against CTV News at Noon, which has far more reporting resources and viewer loyalty. But it’s better to have this than not to have it.