The Laval police department is stubbornly standing by its officers who arrested and ticketed a woman for not holding an escalator handrail and having the gall to protest when they demanded she do so. This action caused outrage that is still giving Patrick Lagacé column ideas.

The argument for the police isn’t logically wrong. The STM’s bylaws require people to obey pictograms and there is a pictogram telling people to hold handrails. The fine issued wasn’t excessive legally.

But there’s a reason why courts are run by human judges: laws must be interpreted through the filter of common sense.

For example, if we posit that escalator pictograms must be always followed to the letter, what to make of this: 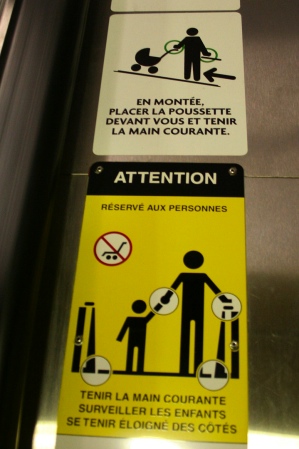 Pictograms on the moving carpet at Beaudry metro

So strollers have to be held in front of you.

But strollers are prohibited.

Perhaps this is why the STM doesn’t ticket people routinely for ignoring these warnings. Even they don’t take them seriously. 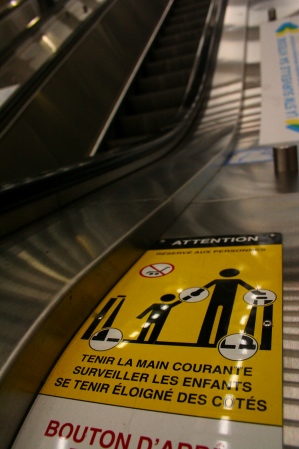 On behalf of the news media, I would like to extend a thank you to Bela Kosoian and Laval police.

Our jobs can be hard sometimes, and during these spring months, as everyone goes outside and tries out their BIXIs and stuff, it’s hard to find something to be unequivocably outraged about.

But a Globe and Mail story came out on Saturday reported a woman was fined for not holding the handrail on an escalator (and not following police demands that she do so), and the need for outrage was obvious.

Reporters filed stories about her ordeal, photographers took pictures of a sad-faced woman holding a ticket in front of an escalator, columnists turned the outrage meter to 11 and bloggers just went ahead and called Laval police Nazis… repeatedly.

It even got some international attention in the “news of the weird” category, and a mention on Boing Boing, which was in turn Dugg.

For the benefit of those who haven’t gotten the story emailed or Facebooked to them a thousand times already, here’s what supposedly happened:

Kosoian, a 38-year-old student and mother, was heading down an escalator at the Montmorency metro station, and either ignored, didn’t hear or didn’t understand repeated instructions from a Laval police officer to hold the handrail. When she got to the bottom, she was handcuffed and issued two fines: One for not holding the handrail ($100) and another for obstruction ($320). Oh, and she also says there was OMGPOLICEBRUTALITY!!! because the handcuffs were too tight.

There’s no specific provision in the STM’s regulations that requires holding handrails on escalators, so a more general one was cited instead:

Of course, the fine was excessive and the supposed infraction entirely benign (the escalator pictogram also prohibits strollers, a provision which is also routinely ignored). Even the STM said they don’t fine people for such things.

Kosoian will probably win her case in court, if it isn’t dropped outright by the prosecutor, especially after all this media coverage. Laval police, for their part, are justifying the actions of their officers, but that kind of blind loyalty is to be expected, especially where the officers were technically in the legal right to do what they did.

For next week, can we get a phone company who’s abusing a grandmother by not letting her cancel her service?