Not having anything better to do, might as well liveblog the leaders’ debate tonight. Will there be enough snide sarcastic comments about the leaders and TV networks to sustain a whole post? We’ll see.

END_OF_DOCUMENT_TOKEN_TO_BE_REPLACED

Take your pick, everyone’s doing it:

The debate itself is an unintelligible shouting match, so I don’t think there’s much analysis to get out of it.

But feel free to analyze the liveblogs themselves below. Which is funniest? Most astute? Quickest?

UPDATE: My initial reactions: most of these liveblogs sound more like transcripts. Are these for people who can’t access TV? They seem to think that knee-jerk snark can replace rapid analysis. As the king of knee-jerk snark, I wonder why I’m not being paid to liveblog this.

My winner is the National Post, which has special software which works properly, has comments from a team of writers instead of one personality, and includes (moderated) comments from visitors with the liveblog comments. Losers include Le Devoir and Canoe, which didn’t have liveblogging at all.

UPDATE 3: Regan Ray at J-Source has a taste of the liveblogging action.

There’s nothing better on tonight (except re-runs of Family Guy/American Dad on Global, Anchorman on ABC, the NFL’s New England Patriots on NBC/TSN, and the Weather Network’s long-term forecasts), so I’m watching the Emmys.

Of course, it’s not enough to be watching the Emmys, you have to read someone liveblogging it too. Something to keep you entertained during Ray Romano’s monologue. (It’s clear why some of the awards were previously presented, because they needed more time for long, unfunny monologues and skits.)

There’s a few options for Emmy liveblogging, but I’ll point to two with opposite mentalities:

FOX has five people you’ve never heard of sitting in the audience with blackberries in their hands, contributing to a blog on its website. The blackberries apparently prevent them from using punctuation, capital letters, or from spelling anyone’s name right. Here’s a sampling of some of the comments:

Most of the other posts have about the same level of insight and grammar.

On the other side of the spectrum, The Gazette’s Basem Boshra is sitting in front of a TV liveblogging the Emmys for the Inside the Box blog. A sampling:

It’s not like the latter tells me much I couldn’t tell from simply watching the show. But at least it doesn’t treat me like an idiot. 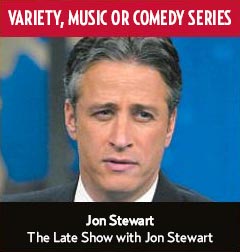 Sacrilege! How could they get the name of his show wrong?

(I don’t quite get this “as it happened” re-run news coverage fad going on. CNN did it last year with its 9/11 coverage, replaying tapes of that morning in real-time. MSNBC did the same this year. But if it works for them, I might as well dredge up something from my archives.)

One year ago today, a tall gunman went into Dawson College dressed in black clothing and a black trenchcoat at about 12:41pm, and fired an automatic weapon at random, shooting students. Anastasia DeSouza, 18, died on the scene, and 19 other people were injured, many seriously. They spent between a few hours and a few weeks in hospital. The gunman, Kimveer Gill, was shot in the arm and then turned one of his guns on himself.

I was at home that day on a day off from work. I first heard about the shooting a few minutes after it happened, when it was mentioned in passing at the end of CTV News at noon. What follows are my observations of news coverage of the incident as it happened that day. (The links are a year old, so some of them may not work anymore)