“Rogers Media Unveils New Magazine Content Strategy” reads the press release, in typical vague fashion. The upshot is that Rogers is making severe cuts to its magazine portfolio, moving some online-only, reducing publication frequencies of others (including Maclean’s), and selling off the rest.

Except Hello! Canada, the celeb gossip mag. Nothing’s changing there.

Going out of print (but keeping websites “with new content posted daily”):

The changes take effect in January. The notice to subscribers says the French magazines will “cease publication” in December, which means if a buyer isn’t found by then, they’re going to shut down.

The fact that Rogers is openly putting these magazines up for sale suggests that obvious potential buyers are not interested (i.e. TVA Publications). But maybe there’s some deep-pocketed person who would be willing to give L’actualité a second chance.

This news comes the same week Rogers announced the shutdown of shomi, its subscription video-on-demand service. You have to wonder what’s next, and in particular what this might mean for Texture, its bulk magazine subscription app. (Rogers tells the Financial Post that Texture makes a profit.)

No word on how many jobs will be lost as a result of these changes. How many magazines are sold versus shut down will have a big impact on that number.

And colour me pessimistic on the future of magazines that have been turned into digital-only publications. Just about every print publication that has gone online-only in the past has eventually been shut down all together.

“TVA Publications is pressing ahead with its strategic plan aimed at strengthening its leading position and better meeting the needs of its readers and advertisers.”

Quebecor’s TVA Publications announced on Wednesday that it is ending six magazines, about 10 per cent of its titles:

Décormag was one of the 14 magazines TVA acquired from Transcontinental in April. That acquisition and others led to a lot of magazines of similar styles at TVA, and this will help rationalize that a bit.

Lundi is the most interesting shutdown here for me, not just because it’s the only weekly, but because of its history. Lundi was founded by Claude J. Charron after he split off from Pierre Péladeau in 1977. Charron sold the magazine to a company that then sold it to Quebecor, and started a similar magazine called 7 jours. Quebecor bought 7 jours in 2000, and so after a non-compete clause ended Charron started La Semaine. Eventually Charron sold La Semaine to … who else, Quebecor. (Radio-Canada has a story on Charron’s history here.)

Quebecor is keeping 7 jours and La Semaine, but is pulling the plug on the original.

Groupe TVA also issued a press release praising the MOI&cie TV channel, in an effort to cut inevitable speculation about the future of that part of the brand after its magazine’s end.

TVA’s statement doesn’t make any mention of how many jobs will be lost as a result of this decision.

The transfer of large collections of print media to and from Quebecor has taken another step, with the announcement that Transcontinental is selling 15 magazines to its Groupe TVA subsidiary for $55.5 million (or $3.7 million each on average). (Quebecor release, Transcontinental release)

The deal, which also includes a contract that will see Transcontinental continue printing those magazines for seven years, includes the following (with number of editions a year and average circulation where I could find it):

Not included are Les Affaires magazine or other business publications, or magazines regional to Western Canada, Vancouver Magazine and Western Living.

These would be the first major English magazines to come under the umbrella of TVA Publications.

END_OF_DOCUMENT_TOKEN_TO_BE_REPLACED 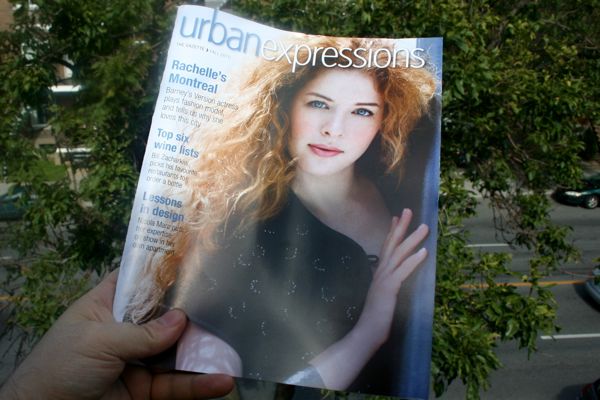 Two projects I’ve been involved with over the past month were revealed to Gazette subscribers this week.

Today’s paper (at least the home-delivery version) couldn’t be rolled up very well because of a thick, 92-page magazine called Urban Expressions. It’s a lifestyle magazine filled with stories about fashion, home decor, food and other girly magazine stuff (no sex or relationship tips though).

And, of course, there’s lots of ads.

I was the copy editor for this issue, and lived it for about a week in August (which is why I didn’t post anything to this blog for 11 days), coming up with clever headlines and captions, and reading and re-reading every story to ensure everything was right (so if you find any typos, you can blame me).

Copy editing a magazine is definitely different from a newspaper. You have days, rather than hours. The stories are long, the pages all designed by a professional designer (in this case, The Gazette’s Susan Ferguson, who had an even more hellish time with this than I did, designing a whole magazine from scratch), and everything goes back and forth between different people who each have their own ideas.

The welcome message from editor Mark Tremblay is online. The magazine has its own website, but right now that’s just a media kit and a mockup magazine for advertisers to peruse. 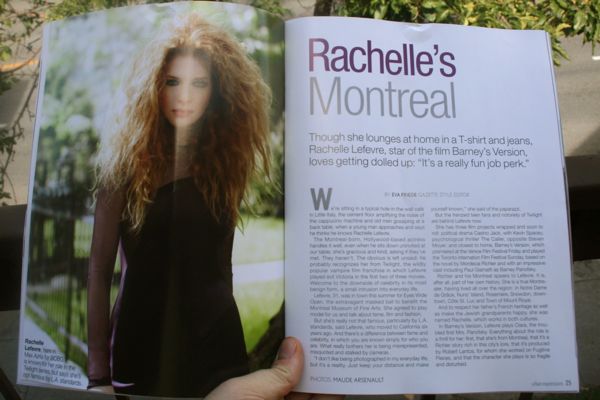 The cover story (like most magazines, this one has a giant picture of a pretty white girl on the cover) is about actress Rachelle Lefevre, who is known for her role in Twilight movies but is also in the upcoming Barney’s Version, a film based on the Mordecai Richler novel that just screened in Toronto. She talks to Gazette style editor Eva Friede about her love of the city and poses for pictures in what I understand are the latest fashions.

The other skybox-worthy change happened the day before, as the paper expanded its Monday Driving section to include some local content. The three-days-a-week Driving section hasn’t seen any regular original content since Jordan Charness’s automotive legal advice column was dropped in 2008.

Among the weekly features, which will be added to the back of the Monday Driving section, are:

There will also be more automotive news, either local or national.

I’m involved in the editing process of this, though only for the local content and I’m not the one laying it out and writing the headlines (now I know what our assignment editors feel like).

As you can imagine, both of these moves are designed to increase advertising revenue. Let’s hope it works. 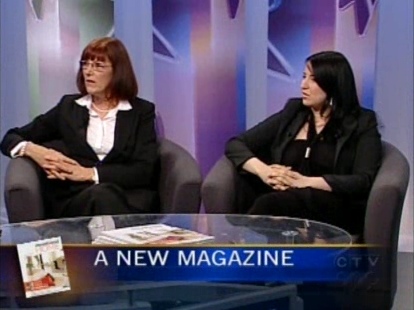 CFCF interviewed Montreal Home publisher Leah Lipkowitz and editor-in-chief Stephanie Whittaker (the latter you might recognize as a freelancer for many publications including The Gazette). The first question from Mutsumi Takahashi is (paraphrased) Are you insane starting up a new magazine in this economy?

Judging from the website, they’re not giving anything away for free.

The Link has a profile of Rover, the independent online arts magazine which includes pieces from some well-known local freelance writers whose launch party was last week but has been around for a bit.

It includes a dig at bloggers as amateur journalists who don’t know what they’re talking about. I get the point about professional vs. amateur journalism, but I think the generalization of bloggers is a bit unfair.

Some Montreal-based anglo writers have put together an online magazine called Rover, which bills itself as an “independent review of the arts.” You might recognize some names if you obsess over freelance bylines in the Gazette (and we all know you do).

So far, everything is free, though the plan is to eventually support the site through advertising.

Considering that Maisonneuve magazine is almost perpetually starving for cash and subsidies, don’t expect much of a financial windfall here.

We have a new magazine in town: Montreal Centre-Ville. Produced by Quebecor (and we all know how much respect they have for the art of journalism), it’s a bilingual magazine about downtown.

Its inaugural issue has some pieces by well-known Montrealers like Dennis Trudeau and Melissa Auf der Maur. But what they say isn’t really interesting. There’s no new insight into the city (certainly not for anyone who lives here already).

I’m all for having new original media in this town, but I’ve seen better stuff out of a Transcontinental-owned community weekly.