The NDP has apparently chosen its candidate for its next most likely by-election pickup in Quebec: the downtown riding of Westmount-Ville-Marie. No, it’s not the guy in the above video (though he sounds like he’d be awesome), it’s CBC Radio Noon host Anne Lagacé Dowson: 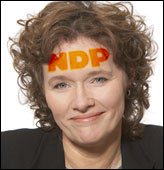 (Note: May not be exactly as pictured)

I worked with Anne during my very brief stint at CBC Radio. Considering how incompetent I was, she seemed like a pretty nice person. The fact that she’s running for office under the NDP banner is hardly surprising (though I doubt she and Jack Layton agree on every issue)

Now the NDP seems to think that after their stunning win in Outremont, getting a broadcast journalist on board is the magic ticket to a second win in Quebec.

Unfortunately, it’s no guarantee. Just look at Peter Kent, former Global National anchor who lost for the Conservatives in Toronto (he’s trying his luck again in a much more affluent York riding). And he was at least on TV. (Get Mutsumi Takahashi or Nancy Wood to run and we’ll talk)

Even worse, her opponent is another star candidate (albeit another failed one), former astronaut Marc Garneau.

The riding, which mainly covers Westmount and western downtown (plus a bit of eastern NDG) could be hard to predict, with a mix of rich anglo Westmounters and poor hippie Concordia students. But the federal riding covering Westmount has been Liberal since 1962, and that’s a lot of history to overcome for a party that hasn’t done better than third with 15% of the vote.

Due to a conflict of interest, Lagacé Dowson has taken a leave of absence from CBC Radio, and the latter immediately scrubbed all mention of her from its website.

UPDATE (July 7): It’s “confirmed” apparently (as if there was doubt). Lagacé Dowson is, as usual, humble:

“I am not falling on my sword in Westmount,” she told a handful of supporters. “This liberal tradition isn’t serving us very well, and we don’t like what the Conservatives are doing to us. I am not running to make a good showing; I am running to win. If Barack Obama against all odds can capture the leadership of the Democratic party in the United States, who says a woman can’t capture the hearts and minds of Westmount for the NDP?”

I’m not quite sure how this relates to Barack Obama, nor being a woman (especially since the riding’s former MP, Lucienne Robillard, has two X chromosomes last time I checked), but don’t let that interfere with the historicness.

Meanwhile, the other parties have filled out their candidates. Just to show how confident the Bloc Québécois is at winning a seat in Westmount, they’ve nominated Charles Larivée, who according to Google is the president of the McGill Political Science Students Association.