The folks behind the various metro parties that have been organized over a year and a half now are putting together another one for Sunday, starting at 9 p.m. from the Montmorency metro station (where the last car boards).

For those unfamiliar with the concept, I point you to the article I wrote about the first one back in March of 2007.

McGill students are organizing a metro party on Friday evening, meeting at 9pm at the back end of the platform at Henri-Bourassa metro (why they don’t start at Montmorency is a mystery, but whatever). The Facebook page shows 77 “confirmed guests”, which translates to about 15-20 people actually showing up.

The party is similar to metro parties that took place in March, May and October of last year. 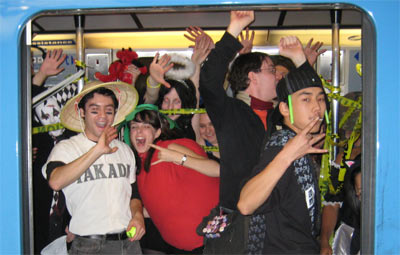 On Saturday night I decided I’d stop by this metro party thing that was going on. I had my doubts about it, since it hadn’t been well publicized, but people showed up anyway.

Most of the crowd showed up together, being friends with each other. Some came alone. None of them seemed to know what was going on, and started asking around for whoever organized this thing. Whoever it was wasn’t there, and the group was left without music (a rather important part to any party).

Nevertheless, at 9:07pm we got on the train at Snowdon and everyone started stomping and cheering and blowing through noisemakers and stringing lights.

The real fun part about things like this is the reaction from unsuspecting bystanders. Some of them looked confused. Others had a blank, mindless stare. Some giggled, and some even joined in the fun. But everyone noticed.

By the time the train got to Jean-Talon, metro security was there to meet it. Nothing particularly nefarious had taken place. Doors weren’t held, alarms weren’t pulled. All they were doing was making noise, most of which got drowned out by the sound of the train speeding along.

Still, everyone got out there. And after a short delay while the tangled mess of lights was being freed from the support bars they were tied to, the group found itself on the platform, thanking the security guards for being such good sports about it all (the guards weren’t actually being insanely nice, but the cordial atmosphere took them off guard (no pun intended) and discouraged them from escalating the situation further).

After a post-mortem on the escalator, the group split up, and I found myself following the larger faction to the orange line heading downtown. They still had all their stuff with them, so they decided they’d have another party on the orange line from Jean-Talon to Berri. I debated whether to stick with them and watch what happened or go home.

I’m glad I chose to stay. Once they got on, they quickly gained the support of a small group of young men. One sat in the middle of the party, enjoying the scene playing around him and grooving with the noisemaker-generated rhythm. Another got up and started dancing like he was in the middle of a nightclub, grinding against the pole and breakdancing on the floor. The third sat in his seat, his eyes half-closed and looking like he was either high on valium or low on sleep.

Again, the same set of reactions. One couple looked like they were in a waking coma, but the rest of the people in the car stared and laughed at the entire scene.

Just as the train pulled in to Berri, I realized what was wrong with valium guy. He jerked forward suddenly and alcohol-soaked vomit magically appeared on his jacket and the floor. I decided it was time to leave before the place got stunk up. (Should I point out the irony that this kid’s vomit is going to leave a more lasting impression than a group of noisemakers who cleaned up after themselves?)

After some coaxing from one of the partyers, who introduced me to his friends, I decided to join them for some karaoke at a bar near Ontario and Papineau.

“Dive” isn’t an apt description for this place. It was cliché. Sea-green walls, glittery curtains, VLT machines, a claw prize machine, giant 40 oz beer bottles and tiny glasses (cheapest alcohol I’ve ever seen at a bar by the way), middle-aged waitresses who think they’re more attractive than they really are, and fat, bald 40-year-old men badly belching out 80s rock songs. I should start recommending it to tourists.

Saturday at 9 p.m., meeting at the Saint-Michel platform of the Snowdon station.

I’m not quite sure why they’re taking the short blue line instead of the considerably longer green or orange lines. In any case, there are only 18 confirmed guests, so it probably won’t be anything near the greatness that was Newmindspace’s metro party in March.

I have another page to myself in today’s paper:

Some extra tidbits not included in those articles:

Meanwhile, for those not watching the game tonight, there’s going to be a naked race at the corner of St. Denis and Rachel at 9pm.

I think I’m going to start getting a reputation for the kinds of stories I cover.

Newmindspace are cutting the notice a bit close, but they’ve finally set a date for their
metro party: Tomorrow (Friday) at 9pm, starting in the last car at the Henri-Bourassa metro station.

I’ll be writing about it.