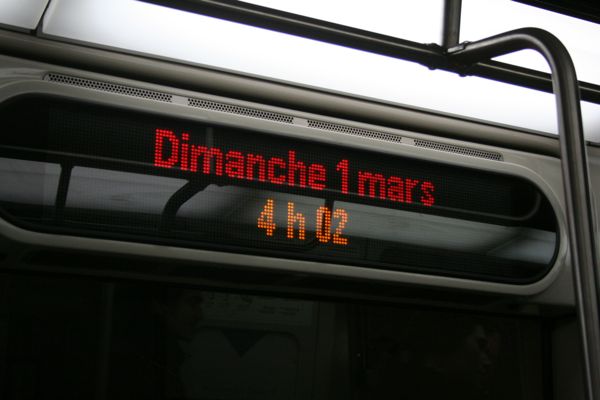 The count stands at three. Only three times since it opened in 1966 has the Montreal metro run throughout the night:

There are reasons beyond financial ones for the metro to stop running during the night. Overnight is when the tracks are cleaned, when maintenance is performed, when money is transferred. Subways that are open 24 hours (like in New York) have extra tracks that can be used when one is closed, but Montreal doesn’t have that luxury (unless it wants to run the metro only one way).

But, as in the examples above, exceptions can be made once in a while. The STM decided to make one this year, and organized itself to keep all 68 metro stations open throughout the night, and have trains running on all four lines.

END_OF_DOCUMENT_TOKEN_TO_BE_REPLACED

Sure, there’s Montreal-as-Boardwalk Monopoly, but how about some board games that are all-Montreal? 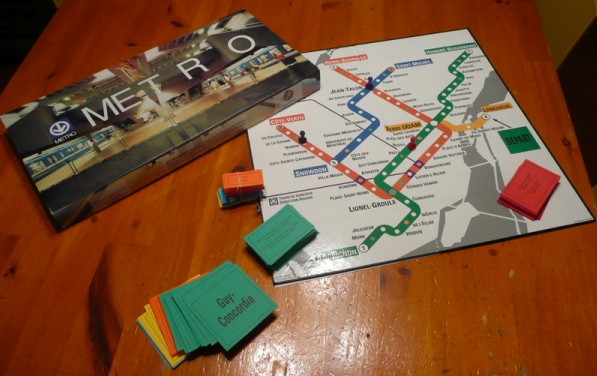 I have no clue how this game is supposed to work, but it looks fun. Spotted in a metrodemontreal.com forum post. 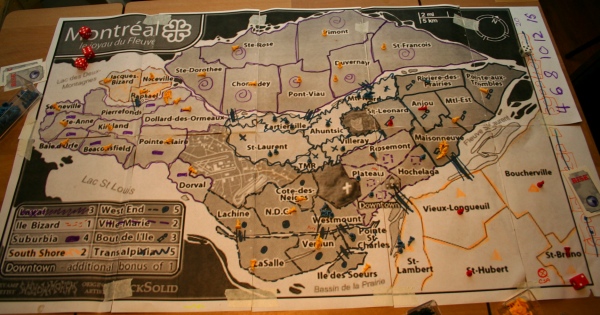 I played this at a Geek Montreal GeekOUT, and won. (Hint: Controlling the West Island is key.)

Sadly, I wish I could point you to somewhere to buy/download/copy these things, but my searches have come up empty. So just stare at the pictures and imagine the fun of some day conquering the Plateau. 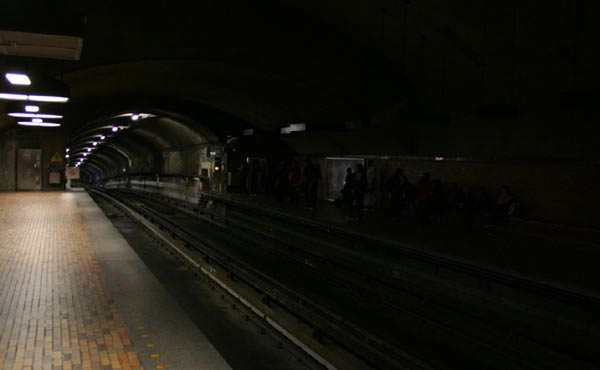 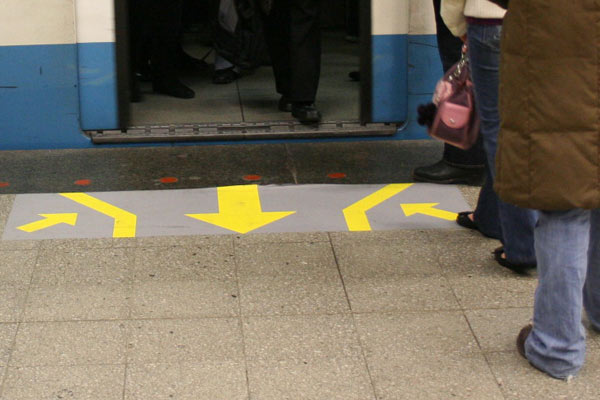 END_OF_DOCUMENT_TOKEN_TO_BE_REPLACED

Chris Hand, formerly of Zeke’s Gallery, gave an interview to CKUT recently in which he talks about art in the metro. Worth listening to if you have 11 minutes and 53 seconds to kill. 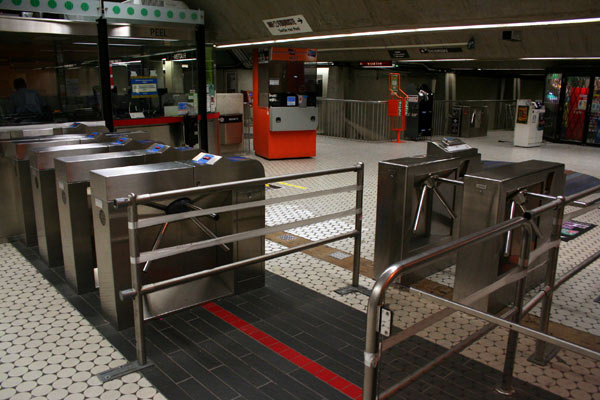 As students were forced into the new Opus smart card system when their reduced-fare passes expired on Oct. 31, the STM took the opportunity to change the configuration of turnstiles at metro stations, switching more to the newer smart-card machines.

The change quickly began irritating riders using the magnetic bus passes, who have already taken to writing letters about their frustrations.

I’m going to miss quite a bit about the older turnstiles when they’re eventually phased out entirely. Instead of reading miniature punch cards, they’re scanning RFIDs. Instead of a welcoming two-tone acknowledgment of a fare paid, there is only a single soulless beep.

(or, at least, those who hear about a website in the morning and make a note to visit a half hour later)

In case you missed it, I was invited by CBC Daybreak to come in and give them an analysis of blog coverage of the federal election campaign (my super-secret project). I was originally supposed to go on yesterday, but with the debate going long I was bumped to today.

Unfortunately, in the first time in months (years?) that I’ve taken a metro train during morning rush hour, I experienced four separate delays (one of which had me stuck in the tunnel). I practically had a heart attack, knowing full well that radio deadlines aren’t flexible by even a second.

I gave up at Laurier metro as the lights went out in the train, and hurried outside to let the producer know I wasn’t there. They quickly decided to do the interview by (pay)phone. (One thing payphones still have over cellphones is that, because they don’t have to compress their data into compact wireless streams, the sound is much clearer and more radio-friendly. Not as good as in-studio, but desperate times…)

As I told host Mike Finnerty, I don’t blame the STM for the delays, which were due in part to technical problems and because of the traffic tie-ups those problems create. But I wasn’t thrilled with the transit corporation this morning, that’s for sure. (And, of course, the trip back home was entirely uneventful)

Anyway, we talked about this blog (it’s really a place for any opinions I like to give on anything, though I focus specifically on the media, public transit, stuff going on in the news, blogs, and of course myself. You can also read what I’ve written about the federal election so far.

We also got into the meat of the matter (though six minutes goes by so fast when you’re talking about stuff), discussing blogosphere reaction to Elizabeth May in the debates, as well as a video by Justin Trudeau (and the parody of that video by Prenez Garde Aux Chiens, whose season premiere is tonight at 10pm on Canal Vox) that has been making the rounds in the blogosphere recently.

I’ll try to get a clip of the segment up soon. 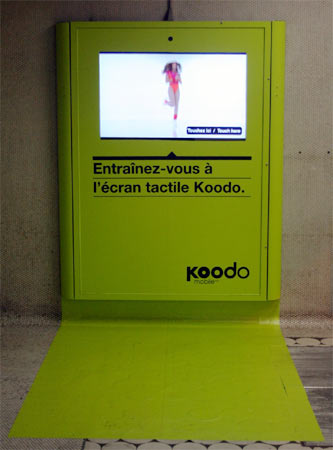 Last weekend, some metro station platform ads were replaced by a television screen inviting people to “train” with some Koodo-branded games. Koodo, you’ll recall, is the Telus-owned “discount” cellphone service which competes with Rogers’s Fido and Bell’s Solo Mobile services. It unexplicably uses cheesy 80s workout clichés as the basis for its branding. 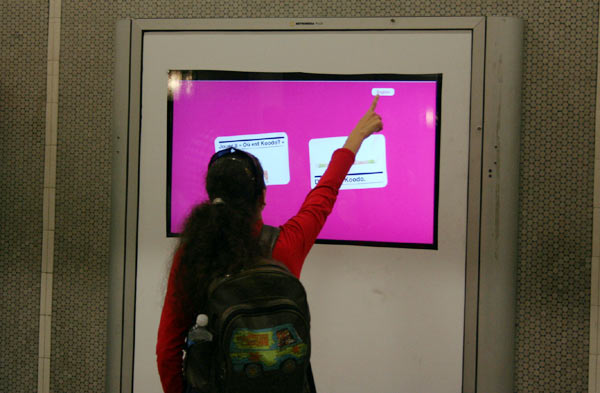 Lo and behold, it worked. People on a metro platform waiting for a train are a notoriously bored bunch (even if they’re in a hurry). Shiny things with buttons will quickly find people willing to press them.

Unfortunately, the games themselves weren’t that good. In fact, one wasn’t even a game, it was just a menu filled with information about Koodo’s cellphone plans. The only actual “game” is a Where’s Waldo-style search game that requires the user to “scroll” through the map because it doesn’t all fit on the screen. 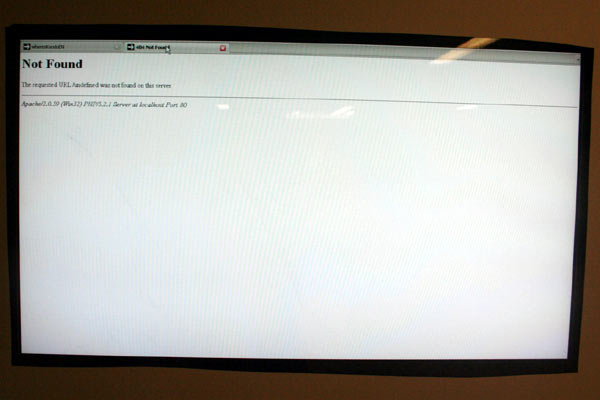 I’m not quite sure how I did this, but I somehow created a new tab in Internet Explorer (which this apparently runs on) and sent it to a page which doesn’t exist.

So apparently these ads are running on Windows servers using a two-year-old version of the Apache web server. (On the plus side, the system resets itself after a minute or two of inactivity)

I have to give Koodo credit for this one. After all, I’m blogging about it, which was the point. But it doesn’t make me want to get a Koodo phone plan any more. 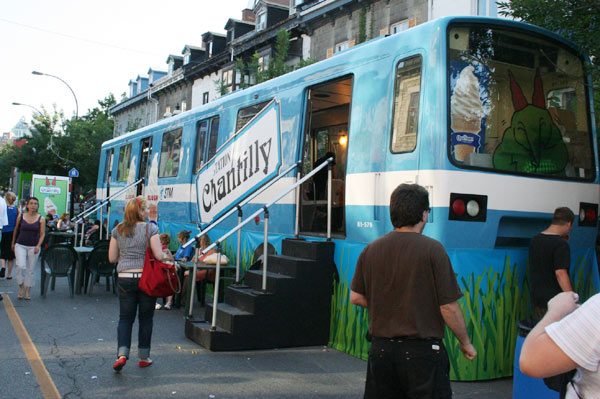 The other day (you know, back when it wasn’t raining), I wandered on to the Just for Laughs outdoor fun zone. For those of you who have never been here, it’s not so much funny ha-ha (the comics are saved for shows people pay for), it’s more about having fun with games, clowns, mimes and other amusing things.

The most amusing thing for me was this: a metro car, pulled out of the garage and parked on the street to be turned into an ice cream parlor.

END_OF_DOCUMENT_TOKEN_TO_BE_REPLACED

Nice to know that a devastating attack on the Montreal metro system which hasn’t happened yet is already being blamed on a massive government conspiracy involving the CIA.

The Georges-Vanier metro station will be entirely closed this summer (June 2 to Sept.5) as the STM demolishes and reconstructs parts of the station inside and outside (STM !NFO PDF). In its place, a shuttle between Lionel-Groulx and Lucien-L’Allier (or a few blocks from Lucien-L’Allier anyway) will run every 10 minutes from the opening to closing of the metro. Trains will slow down through the station but won’t let anyone off there. 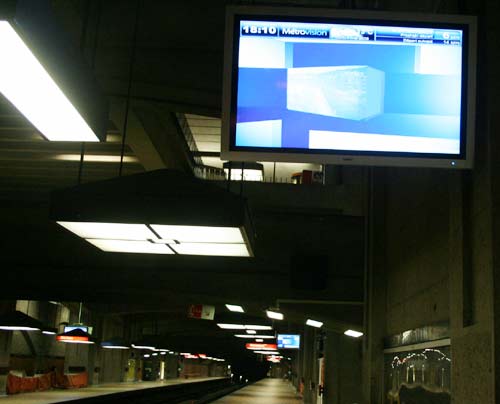 Last week, the Metrovision system went live at Bonaventure station, with flat-panel TV sets installed above the platforms. It joins Berri-UQAM, McGill and Lionel-Groulx as stations that provide time, weather and train arrival information as well as news from RDI, and of course advertising to pay for it all.

Hope they’re tied down tight because they look really stealable. Especially if the lights go out again:

If you’re a regular transit user in Montreal you’ve noticed that the STM has been using photos of its metro stations as art on its monthly bus/metro passes.

Unfortunately, someone made an oopsie this month. The caption on the April pass says “Station de métro Square-Victoria”, but it’s clearly a photo of the ceiling of Jarry station. 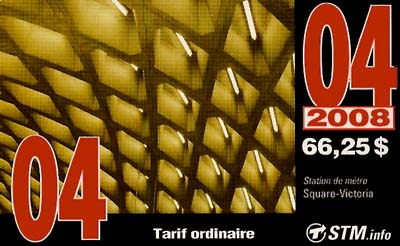 The reason for the error? They forgot to change it from the March pass, which was of the Square Victoria station. 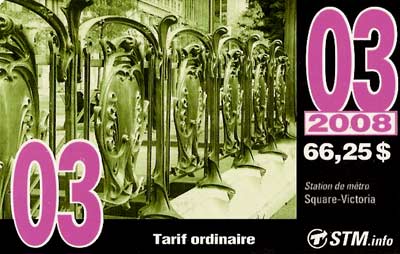 Starting this week, the STM is testing a new audio signal that will accompany the closing of metro doors. The beep, which you hear in other cities like Toronto, is mostly useful for blind passengers who can’t see when the doors close (and may not hear it quite as well).

They’re looking for feedback about the sound before they begin installing it on all trains.