So apparently the ministry of transport has vehicles. And those vehicles have wheels. And tires on those wheels are changed for the winter. And buying tires costs money.

I know transit reporting can be boring at times, but come on…

The Minister of Transport today released a list of intersections in Quebec where photo radars will be installed to catch people running red lights.

Radio-Canada did the obvious thing with it: creating a Google map.

These kinds of things are much more useful than lists, as I learned when I created a Google map of dangerous overpasses last year.

Radio-Canada has a report on the Transport department’s 86 most dangerous highway segments in Quebec. Of the ones on the island of Montreal (see the full list in an HTML table here), all but one are either in/near the Turcot interchange or near the Dorval airport. The other is Notre Dame East between Pie-IX and Dickson, a road they’re trying their best to make even more dangerous.

Earlier this month, the Ministry of Transport completed inspections of 135 bridges and overpasses that were red-flagged by the Johnson Commission as potentially hazardous and immediately restricted from carrying overweight trucks.

The result: While 83 of those overpasses have been completely reopened, the rest will require either major repairs or replacement over the coming years.

Among the last to be inspected (or at least evaluated) (PDF) were three on the island of Montreal: Two overpasses of Highway 138 over Monette Street in LaSalle will be replaced, while Côte-Vertu over Highway 13 will require major repairs.

With the list now complete (PDF), I’ve updated my overpasses-of-death map on Google Maps to reflect the results.

Not sure if seeing so many red marks should make us feel good or bad about the situation.

The Johnson Commission into the De la Concorde overpass collapse submitted its final report to the government last week. The report, which is 222 pages long, is available (in English!) as a PDF on its website. (The last page of the report laughingly self-congratulates how much it’s saving the environment by printing on recycled paper, even though the previous page is entirely blank.) 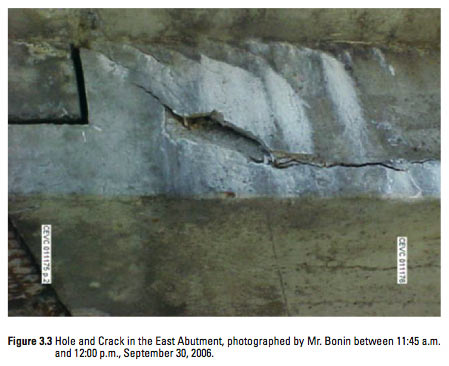 (Above: the last photo taken of the De la Concorde overpass before its collapse, by a Transport Department road supervisor sent to pick up some fallen concrete. The commission absolved him of responsibility since he wasn’t an engineer.)

In short, the causes of the collapse were as follows (disclaimer: I’m not an engineer, so some of my explanations might be a bit off):

All that comes down to the big cause: cutting corners to save money. Cutting corners on inspections, on materials, on competence, on time. Each, by itself, isn’t dangerous. But put enough together and they spell disaster. The blame was, in the end, so spread out that no individual can be considered liable.

So now the government is going to create an independent agency for road inspections (to counter the “culture of negligence” at the MTQ) and spend billions of dollars to catch up on infrastructure maintenance.

What gets me about all this is that the transport department (and the commission itself) has been working overtime trying to convince everyone that our structures are safe.

The implication in that is that the de la Concorde overpass collapse was a one-time thing. A fluke that can’t be repeated. But while there were a lot of coincidental mistakes that contributed to the collapse, not a single one of them is guaranteed not to have occurred with other structures. There’s no guarantee that there isn’t a structure out there with bad concrete, or improperly-placed steel supports. Nothing stops a similar collapse from happening to another structure.

That said, the transport department has already changed the way it maintains overpasses, and has inspected many of them thoroughly. The culture of negligence and cost-cutting corner-cutting has, for now, been replaced with a healthy fear of a similar event happening again.

It’s debatable how long that fear will last. After the Challenger space shuttle exploded in 1986, NASA started to become overly cautious about safety in its missions. But eventually cost-cutting reared its ugly head in 2003 when the Columbia burned up on re-entry. Though the direct causes were different, reports cited an attitude at the organization that encouraged disregarding small risks to keep missions going.

Hopefully we won’t forget the lessons of de la Concorde in 20 years just to save a few bucks.

Well, the Quebec government has started inspections on those 135 structures it says are “at-risk”. And of the 20 they’ve inspected so far, nine require major repairs or complete replacements.

Now here I was all eager to update my map of crumbling Quebec overpasses and bridges using this CBC Montreal story. It lists two bridges that will be replaced and eight more that will need major repairs. (Yeah, I know that adds up to 10 and not 9, but journalists don’t do math.)

It didn’t take long before I started having doubts about the list.

First of all, I can’t find out where they got it. The transport ministry’s website doesn’t have it in any of the documents related to their inspections of the first 20 structures, and no other news organization has any specific list of structures.

Secondly, their descriptions are vague. One of the overpasses needing “major repair” is “Highway 10 overpass in Marieville.” That’s great and all, but there are four overpasses on Highway 10 in Marieville on the list of 135 structures under review.

Finally, some of it is just plain wrong. One of the two listed for demolition is “Route 104 overpass in Franklin, Montérégie.” But Route 104 doesn’t go anywhere near Franklin. The western tip of Route 104 (in St. Jean sur Richelieu) is 59km away from the town. It was probably just a typo (there’s a Route 202 overpass in Franklin on the list), but it’s kind of important to get these things right, and without any other sources to back this already-faulty information up, I can’t use it. (UPDATE: LCN uses the same faulty description, so I guess it must be the transport department that got it wrong)

And that makes me cranky.

On the plus side, I found this proprietary (read: sucky) Google-Maps-style atlas of the 135 structures under inspection. Sadly, it doesn’t give any information about the status of the evaluations of the individual structures. But I’ll use it to pinpoint the location of some of the bridges I couldn’t map exactly.

And I’ve updated the list of City of Montreal-run overpasses which needed inspection to show most of them have reopened to heavy trucks.