It was one of the great highlights of the Sochi Olympics: Down 2-0 with three and a half minutes remaining in the gold-medal game, Canada’s women’s hockey team mounts an improbable comeback, with a goal by Brianne Jenner and another with less than a minute left from Marie-Philip Poulin to send the game to overtime, where Poulin would strike again to make Canada the Olympic champion once again.

It was no Miracle On Ice. The Canada-U.S. final was given before the tournament even started, and Canada had won the gold in the three previous winter Olympics. But in terms of sheer excitement and the holy-crap-did-that-just-happen feeling, it was hard to beat.

Now, with the Olympics over, the male players return to their professional teams in the NHL, KHL or other leagues. The women, meanwhile, return to relative obscurity.

It’s unfortunate that while the NHL gets all the attention, the women’s hockey players that created such a spectacle at the Olympics get so little three years out of every four. The Canadiens sell out the Bell Centre for 41 games a year even though tickets cost $100 to $400 apiece, the concessions are wildly overpriced, the team is often mediocre and the players don’t speak French.

Meanwhile, at the Étienne Desmarteau arena, the Montreal Stars team of the Canadian Women’s Hockey League struggles to fill seats 12 games a year with $10 ticket prices, incredibly cheap food, players that are mostly from here and who always stay after games to give autographs to anyone who wants them.

And they’re also good. How good? Going into this weekend’s games, the Stars are riding a 20-game unbeaten streak in regulation. The only game they lost in 60 minutes was the season opener in Boston. Their record this season is a ridiculous 18-1-2, their record at home is a perfect 10-0-0, and they have more than twice as many goals for as goals against (91 vs. 40). All four of the top points leaders in the league play for this team.

END_OF_DOCUMENT_TOKEN_TO_BE_REPLACED 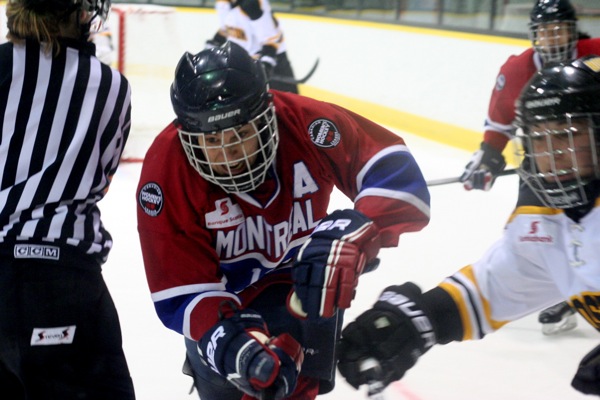 It’s that game they play on ice. Rubber disks, large nets, lots of padding, you remember.

Anyway, while the National Hockey League continues to not play because of a lockout, Montreal sports media (which are always all about the Canadiens, even during the offseason) have been struggling to find other things to do with their time. Some have decided to follow the Canadiens’ farm team, the Hamilton Bulldogs, or Canadiens players biding their time in Europe. Some have written countless stories recounting every minute detail about NHL labour negotiations. Some have written a 12th story about how Montreal bars are suffering because drunken hockey fans aren’t pouring in to watch the game three times a week. Some have just decided to report on things that didn’t actually happen.

And some have decided to look at other sports. (Hey, did you know we have professional football and soccer teams in this city?)

END_OF_DOCUMENT_TOKEN_TO_BE_REPLACED

A database search tells me it was Saturday, March 21, 2009. I was on the sports desk and putting together a package of hockey notes. Among them was an item about Montreal’s team in the Canadian Women’s Hockey League winning the inaugural Clarkson Cup, a trophy designed as the women’s hockey version of the Stanley Cup.

A hockey championship for a Montreal team, and it was essentially a brief.

I helped it a bit by taking a photo of the team with the cup that the league had put out through Canada Newswire. If there wasn’t going to be much text, there could at least be a nice photo. But there’s just so much an editor can do without copy.

Three years later, Montreal has won its third championship and women’s “professional” hockey is being taken a bit more seriously. The Gazette had a story advancing the tournament, and had a freelance story about the championship final afterward, though there wasn’t a photographer so we had to use a file photo to illustrate the story.

The championship game was televised. On TSN2. On tape delay.

Gazette hockey writer Pat Hickey wrote a column about the Stars, about how women’s hockey is still far from professional, and the players have to spend their own money to participate. But, as he points out, it’s getting better. They have to pay less, partly because more people are going out to see the games. As in more than 200, paying $5 a pop.

I wanted to go see a Stars match this season, but my work schedule didn’t give me an opportunity. By the time I could find the time, they weren’t playing any more home games.

Okay, the Canadian Women’s Hockey League has a lot of work to do. It only has six teams, for one, and one of them doesn’t play a full season because it would require too much travel.

But if there’s any hockey team that deserves support, it’s them. A championship team with locally-bred stars (many Olympic champions) who play not because they get millions of dollars for it but because of their love for the game. A team who, despite having dirt-cheap ticket prices can’t draw a significant crowd at home games.

They are, in just about every sense, the anti-Canadiens.

But public support is tied with media support. The Stars and other CWHL teams are covered as much as amateur and university sports. Local media send dozens of people to every Canadiens game even after they’ve been mathematically eliminated from the playoffs, but nobody is seriously covering the Stars.

I’ve used this team as an example when talking to young people who want to get their start in journalism. When they say they want to cover the Canadiens, I wonder: Why? What could you possibly report about this hockey team that dozens of veteran professionals haven’t already dug up and rehashed ad nauseam?

Yeah, it’s cool to go to Canadiens games and sit in the press box (or so I assume – I’ve never been). But journalism is about finding out things everyone else doesn’t already know. And there’s little opportunity for that at the Bell Centre.

And yet, across town, there’s a team of dedicated hockey players who would be happy to grant you interviews, to talk at length about their games and their lives without resorting to sports clichés. There’s an opportunity for a young journalist to own a beat that nobody else seems to care about, to instantly become the expert in something rather than a forgettable also-ran in an overcrowded dressing room. An opportunity to uncover fascinating stories about real-life people who are at the height of athleticism while others celebrate the chance to be the seventh person to ask Mathieu Darche what his favourite food is.

It’s a golden opportunity, but nobody is taking advantage of it.

When I brought this up with one up-and-comer in the journalism industry, his response was that he doesn’t really care about women’s hockey, but he is very interested in the Canadiens.

I can’t tell him he’s wrong. I understand why a fan would feel that way. But I don’t understand how a journalist would.

UPDATE: The New York Times, of all things, has a story about the CWHL and the Stars along the same lines.

In case you haven’t heard already, Montreal won the Cup.

That other hockey team? I don’t wanna talk about it.