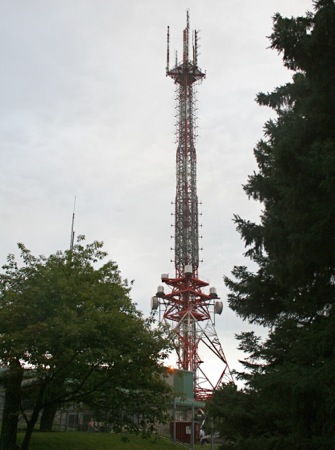 If you tuned in to FM radio at 4am on Monday and noticed that your favourite Montreal station is either noisy or missing completely, it wasn’t your imagination. CBC is doing work on the Mount Royal antenna tower and that has forced overnight shutdown of transmitting antennas on the city’s busiest transmission tower.

Stations were notified that the tower would be interrupting transmitters from 12am to 5am on July 7 and 8, though as far as I can tell only CKUT at McGill passed that message along to listeners.

END_OF_DOCUMENT_TOKEN_TO_BE_REPLACED 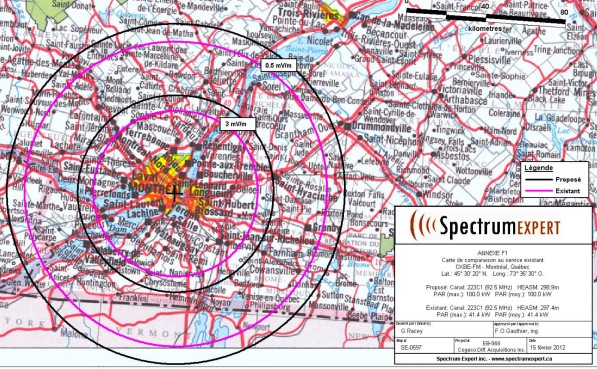 Existing (purple lines) and approved (black lines) coverage areas of CKBE-FM 92.5, as prepared by SpectrumExpert. The map for CHMP-FM 98.5 is identical.

More than a year and a half after they were first published, the CRTC has approved applications from Cogeco Diffusion to increase the power of two of its stations on Mount Royal: CHMP 98.5 FM and CKBE 92.5 FM (The Beat). Both will now be allowed to increase power to the maximum 100 kW allowed by their class, and others could follow.

As the CRTC explains in its decision, a moratorium had been placed by Industry Canada on power increases for transmitters on the CBC tower on Mount Royal, concerned about the effects of high-power radiofrequency fields in the area around the site (in Mount Royal Park). When analog television transmitters were replaced by digital ones that required a lot less power, that moratorium was lifted, leading to Cogeco’s applications.

The CRTC said it then asked the CBC to conduct a study to see if other FM stations operating from the tower would also be able to increase to their maximum allowable power. The report said that they could, so the CRTC approved the applications. This means that stations like CHOM, CJFM (Virgin Radio), CFGL (Rythme FM), CKMF (NRJ), CITE (Rouge FM) and CIRA (Radio Ville-Marie) could apply to increase their power to 100 kW (they’re all around 40 kW right now), and it would likely be approved if it didn’t cause interference to other stations’ protected contours. Radio-Canada’s CBF-FM and CBFX-FM are already at 100 kW, and other stations that broadcast from that tower are of a different class.

CKOI-FM is the only station in Montreal that operates at more than 100 kW. One of Montreal’s first FM stations, it was licensed at 307 kW, and grandfathered in at that level. It broadcasts from the top of the CIBC building downtown.

The application for The Beat’s power increase hit a bit of a snag because of an application by Dufferin Communications (Evanov Radio, the same people behind the yet-to-launch Radio Fierté 990AM and Jewel 106.7 in Hudson) for a new station in Clarence-Rockland, Ont., on the same frequency. That station’s parameters would not have caused problems with The Beat’s current protected zone, but both stations would encroach on each other’s protected contours if The Beat increased to 100 kW. At first, the CRTC decided to treat these as competing applications. But the two came to a deal and decided they would accept interference from each other. The Clarence-Rockland station was approved by the CRTC in February. Branded “The Jewel 92.5“,  it launched in September.

The application also caused worry for CKLX-FM (Radio X 91.9), which operates on a nearby frequency. A power increase for The Beat would mean more interference, though because Radio X is three channels away, that interference would be only in an area very close to the transmitter. The CRTC notes that CKLX accepted this potential interference when it first applied for a licence.

For 98.5, there was an intervention by CIAX-FM, the community station in Windsor, Quebec, at 98.3FM, worried about interference. Because Windsor is more than 100 km away from Montreal and its transmitter is less than 500 W, there’s no actual interference problem there.

There’s no word yet on when the transmitter power increase will happen. I’ll update this if I hear back from Cogeco on the matter. Though the radiated power will be more than double what it currently is, the actual effect on reception will be modest. Some listeners on the fringe who pick up the station with some noise will see that noise diminish, but for most people the change will be imperceptible.