Anyone else find it funny that the Montreal Juniors have both a Layton and a Dion on the team?

Last night, Layton (the highest-scoring player on the team) scored three goals, while Dion scored one and got a penalty.

For obvious reasons, I always cringe when people make fun of others’ family names. This is at constant odds with my job as a headline writer, which half the time involves exactly that. 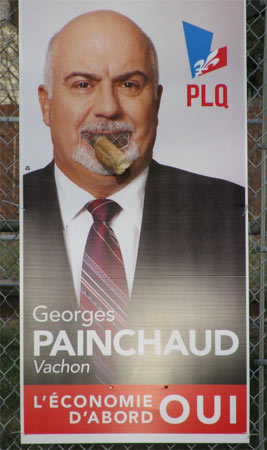 Spotted on the Montreal LiveJournal community.

You know, part of the problem of having other people pick names for you is that sometimes they pick stupid names.

It’s even worse if “other people” is “the general public”

Having apparently solved every other problem they can think of, West Island mayors are now trying to decide what to call residents of their towns: Is it Kirklander, Kirklandan, Kirklandais, Kirklandian or Kirklandite?

McGill has a bug up its butt.

The university, whose name has apparently been left unprotected for almost 200 years, has begun clamping down on the use of the name “McGill” by organizations on campus. It started with CKUT, which was blackmailed into dropping “McGill” from its name last month. Now they’re reviewing all student-run groups, forcing them into mounds of paperwork to justify using the McGill name in theirs.

Concordia University has had a similar policy (PDF) since 2001, with one significant difference: Concordia’s policy grandfathered existing student groups, and as far as I can tell they don’t sweat the small stuff: Only for-profit enterprises and large groups bother with approval.

McGill’s move is just silly. Well-intentioned, but silly. A student club devoted to stamp-collecting at McGill is obviously going to call itself the McGill Stamp-Collecting Club or something similar, just for clarity’s sake. The name implies only that it is at McGill, not that it is run by McGill’s administration. Requiring such a complicated process as board approval will only create unnecessary work for volunteers and discourage students from creating social clubs on campus.

McGill says they’re “reviewing” the policy. Let’s hope they come up with some sane guidelines that have more to do with encouraging a vibrant and active student populace than it does with over-regulation and paperwork.