On Wednesday morning, the STM convened the media to announce its overhaul of the night bus network, the biggest changes to the night service in more than a decade.

There are a lot of changes here, and they’re summarized below, but the major themes are these:

With the three new routes, the extension of three others from three to seven days a week, and the increase in frequency, the number of departures goes up pretty dramatically, from 1,368 to 2,009 per week, an increase of 47% (note that this is by my hand count, so it may be off by a few). This doesn’t count the nine routes whose length has been extended, in some cases dramatically. In terms of hours of service, the increase is from 46,000 to 80,000 hours a year, a 73% increase.

The STM calculates that 95% of the people in the Montreal agglomeration now live within one kilometre of a night bus stop. It also estimates that transfers will be reduced by 25%

All changes take effect the night of Monday, June 27, along with changes to day bus schedules. The STM has posted a cute little Flash app showing the various routes.

Why did it take so long?

These changes are a long time coming, and follow some serious public consultation. As a public transit user, it’s hard to be against a huge increase in service. My criticisms, laid out below, are minor compared to the praise for the new service. If anything, my biggest reaction is to ask why it took so long to make these changes, and why the routes we’re bringing back were removed in the first place. (I have the answer to the second question, unfortunately: Ill-advised budget cuts to public transit in the 90s).

As a regular night bus user, I can attest that the service is underused by casual users. There are a few reasons for this:

Many people who don’t like what the night bus service offers use alternative forms of transportation. Many take cabs, which is expensive but very convenient (and relatively worry-free when you’re drunk). But many people also prefer to drive home from bars at night, which presents the very obvious risk of drunk driving (and an even higher risk of “buzzed” driving, from those who are convinced they’re just under the legal limit). I don’t know if increasing night bus service will have a major impact on drunk driving stats, but if even a handful of lives are saved because a few people took a night bus instead of driving after a long night at a bar, I’d say it’s worth it.

“It”, by the way, is about $4.4 million, according to STM chair Michel Labrecque. 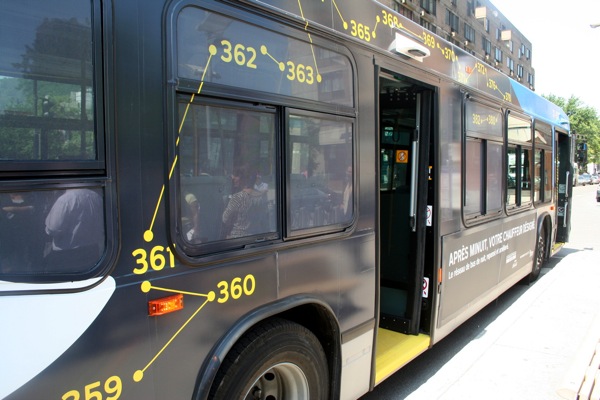 A bus wrap advertising the new night network is one of the ways the STM is getting the word out.

The new network will come with an advertising campaign to inform riders, which includes wrapped buses, social media, and a campaign organized with Labatt.