This week’s blog is Gypsy Bandito (and the Magic Flying Media Machine) by CT Moore, a social media marketing and other buzzwords-type person. His posts mainly take the form of videos of him thinking out loud while walking down the street, holding a video camera at his face. Others might think him insane, but we know better. (UPDATE: He just resigned from his job… so repeat previous sentence.)

This week’s Justify Your Existence is Gary Shapiro, a spokesperson for the Office québécois de la langue anglaise, the anglo rights group that is fighting for bilingual commercial signs. They launched last week and got quite a bit of media attention. They also ran this ad in the Suburban and Gazette on Wednesday: 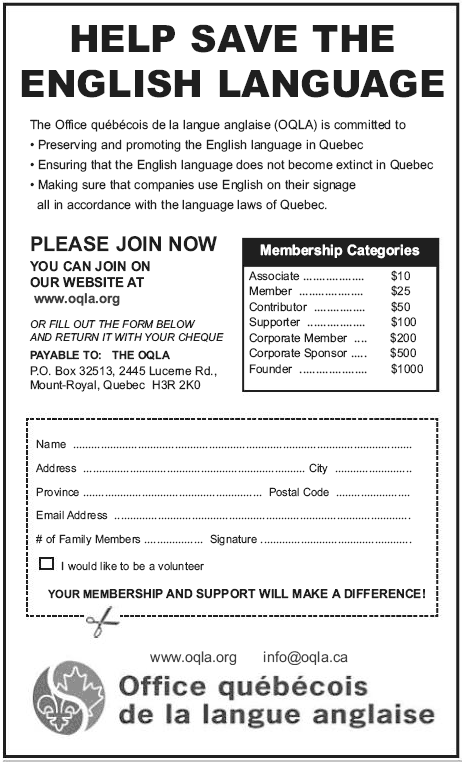 My first question to Shapiro: “Is this a joke?” didn’t go over well. Though the name is a parody of the OQLF, the issues the group raises are apparently very serious.

(UPDATE: The West Island Chronicle does an informal survey of large stores and shopping malls to see what languages their signs are in. TVA also has a video report on the group, with the journalist talking to the OQLF, Mouvement Montréal Français, Gilles Proulx and just about every pundit he could talk to except Shapiro or another member of his group — no mention is made of an attempt to contact the OQLA to have them explain themselves.)

Finally, there’s also a Bluffer’s Guide on the history of Poutine. It may or may not have turned 50 this year, depending on whose story you believe. While the media tout the story of Fernand Lachance inventing it in Warwick in 1957, one restaurant proclaims it was the birthplace of the dish.