Are you pissed because you just saw RDS, TSN or Sportsnet blacked out during an NHL game? This post explains what’s going on and what you can do about it.

Updated Sept. 5 with Rogers-Canadiens regional deal, as well as additional national games for Oilers, Flames and Canucks. Also includes information about out-of-region coverage where two Canadian teams face each other, and information about where some games are national in one language but regional in the other.

The final piece of the puzzle as far as the NHL schedule is concerned has finally been revealed with the publishing of regional broadcast schedules. This allows us to break down who will broadcast what where, and I’ve done so below for the seven Canadian NHL teams.

As previously announced, Rogers has all the national rights to NHL games, which includes all Saturday night games and all playoff games. Beyond that, it gets a bit complicated (some games are national in one language but not the other, for example). Regional games will be viewable in the team’s region (here’s a map of the teams’ regions), but those outside will need to fork out cash for NHL Centre Ice or NHL GameCentre to see all their team’s games. (Or maybe not? Rogers still gives me a coy “details will be announced in the coming weeks” when I ask about that.)

TSN has decided to assign its three regional rights packages to specific channels: Jets on TSN3, Leafs on TSN4 and Senators on TSN5. The five-channel TSN system launches on Monday on every major TV provider in Canada except Videotron (which tells me it’s in discussions to add the other three channels).

Below are how the TV and radio rights break down for each team. They include regular-season games only. Preseason games are regional, and subject to separate deals. All playoff games are national, so their rights are owned by Rogers in English and TVA in French.

Radio rights are not subject to regional blackouts. Listed is their local station only and does not include affiliates.

END_OF_DOCUMENT_TOKEN_TO_BE_REPLACED 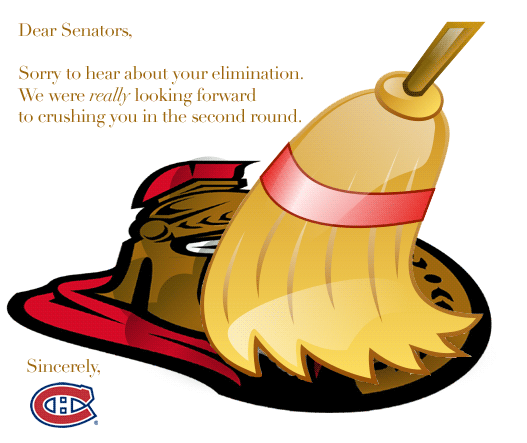 P.S. You need to find a new mascot.