The show, hosted by evening news anchor Debra Arbec, talked to some figures in the anglo Montreal cultural community about some of their cultural “secrets”. The guests include some pretty big local names, like comedian Sugar Sammy, filmmakers Jacob and Kevin Tierney, chef Chuck Hughes and musician Melissa Auf der Maur. They talk about restaurants, bars, urban spaces and other things they love about this city.

This, all in high definition (actual HD, not the fake HD we see on the newscasts). I actually can’t think of another program produced for a local audience by any of the three anglo broadcasters in this city that was done entirely in HD. 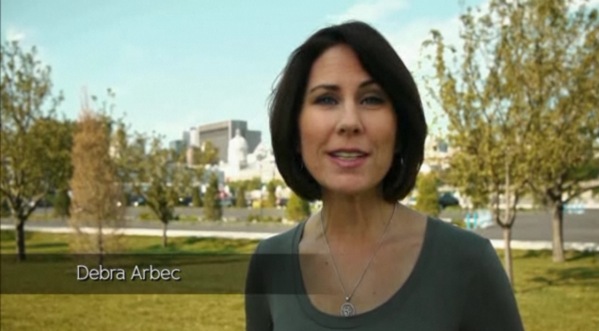 It’s not the greatest half hour of television ever (that soundtrack gets annoyingly repetitive after a while, for one, and some people have noted the Travel Travel-esque vibe), but it’s the kind of thing I’d love to see more of: local programming that isn’t confined to a newscast.

Even though Montreal has three local English-language television stations (four if you include the multiethnic CJNT/Metro 14), none of them air original local programming that isn’t either confined within the schedule blocks of their newscasts or done from their news sets. Not to take away from the quality of local news being produced by these stations, but there are some things we’d like to see that can’t be converted into a two-minute news package or six-minute sit-down interview.

Seeing this show was a breath of fresh air, a sign that maybe the CBC was starting to rediscover the idea that its programming should reflect not only the national culture but the local one as well. And I was hopeful that this was a sign the local stations were getting more control over their programming schedules and/or budgets, being able to work on special projects like this.

But I was disappointed somewhat when I discovered through Google searches that this idea didn’t come from CBC Montreal. “Cultural secrets” shows were produced across the country: Ottawa, Toronto, Winnipeg, Vancouver and apparently other places as well. All were done to coincide with “Culture Days” and the CBC’s 75th anniversary. All followed roughly the same idea, and all aired Sept. 29th at 7:30pm, in the timeslot normally reserved for Jeopardy. (In fact, for Videotron illico users, the show was listed as an episode of Jeopardy, and remains labelled as such on my PVR. This may have resulted in many potential viewers missing the show.)

What bugged me about this national congruence was that it reminded me how much of what happens locally at the CBC is actually decided nationally, imposed on the regions in a cookie-cutter fashion.

It reminded me of Living [insert location here], the regional lifestyle show duplicated across the country that was cancelled during the big round of budget cuts in 2009. At least that was regular programming instead of a one-off show.

When I start giving more serious thought to proposals of radical changes at the CBC, this is one of the reasons why. The other stations are doing daily local newscasts (and, unlike CBC Montreal, they don’t take the weekends off). If this network is going to be funded mainly through government financing, shouldn’t it offer something different?

I’m aware of – and sympathetic to – the budget constraints faced by CBC and its Montreal television station. But English Montreal (and, for that matter, English Quebec) is a linguistic minority, and one would think the CBC would be a leader in giving this community a voice. Lately, it’s seemed more like an also-ran, which is particularly outrageous considering how little is done outside of news at CTV and Global.

Secrets of Montreal, directed by Vincent Scotti and Filippo Campo, and starring Debra Arbec, can be viewed in its entirety on the CBC website.